We have a new album, dubbed Double Album, and if this is the end of the once great NOFX, so be it. 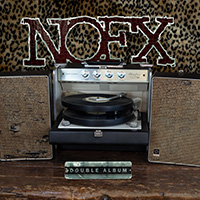 I suppose, those old sayings are wiser than given credit for. Slices of wisdom handed down through the generations; attempts to prevent the next era from making the same mistakes as they before them. The one that comes to mind while again listening to Double Album, the new and potentially last record from NOFX, is that all good things must come to an end. However, there is nothing written about good things having to end well, and if this is the last at bat for the once great NOFX, then perhaps it is for the best.

In early 2021, NOFX released their first record in five years, named Single Album, that was supposed to have been a double album – thus the name Double Album for this new slab of half-assed punk rock. While Single Album was a darker record, it still had a lot to celebrate, unlike the train wreck of an album that Double Album is. Apart from two or maybe three songs, Double Album feels like the band have already retired and no longer give a crap about anything – which begs the question; why release this album if their hearts are not in it?

Earlier this year, NOFX released a statement that there would be one final tour to come in 2023 before the band call it a day. I respect a band or artist or athlete, what have you, for acknowledging when to hang up the skates, so to speak, but I can’t for the life of me figure out why they would chose to record and release another album as lazy and as sloppy as this. Sure – NOFX have never been the most talented horse in the stable, but they were able to carve themselves out a pretty solid career regardless. Power chords being the bread and butter of the band, while the lyrics conjured up some pretty loopy scenarios and context. For a long while, NOFX where fun. Now, they’ve become the punk rock equivalent of that famous The Simpsons meme – old man yells at cloud, or bordering racism and picking on the disabled.

There is no situation where mocking a great human being like Steven Hawking with a lyric like “I don’t feel like moving, I don’t feel like talking, I’m feeling a little Steven Hawking” will ever be funny or socially acceptable. I don’t believe in cancel culture, and grew up in time where jokes could be rough and nasty, but even then, shit like this was below the belt. Fat Mike has pushed the envelope in the past, and people have generally shrugged it off, but this is low. Even for a washed up piss swilling junkie like Fat Mike. If this is the level he and NOFX are resorting to, then good riddance already.

What’s more annoying, is that this song was released four years ago as a single, and has been dragged back for this record. Why? It’s tripe. There is nothing new or fresh on this record, either. It’s more of the same rehashed hyperbole with a mere fraction of the care NOFX used to infuse into their craft. I wonder if it took more than a single (perhaps a double?) weekend to throw this thing together? I get that after four decades, things might grow tiresome, so again, if you’re heart isn’t in it, why are you recording? Scrap it. Call it day. All good – we have what, fifteen albums already? We’re good.

At several moments, Fat Mike attempts to wax poetically but instead comes across as a grump or drunk muttering away to himself. Like that annoying two-toothed crackhead that keeps asking the same three people for change on the train. The majority of these tracks would have been better used on Fat Mike’s solo side project, Cokie The Clown. Depressing, self-deprecating drivel that relies on putting down others to hoist itself up. I don’t care to even mention the moments on the record that I actually enjoyed, as the negatives far outweigh the positives on this one.

If this truly is the final NOFX record, to be followed by their final tour – so be it. Because if this is all that is left in the tank, it’s best to scrap the old rusted four door sedan than to ride the motherfucker until the wheels fall off. And those wheels are hanging on by just one well rusted lug nut as it is. This is a lazy, half-assed record. The sort of thing that bands used to chuck out to finish off a disgruntled record deal with a record label once the relationship had gone sour – only NOFX’s main man owns the label they are signed to. So… yeah. Yeah.

By the way, I believe this is NOFX’s last ever tour as much as I believed Motley Crue when they signed that stupid contract to prove their final world world was in fact for real this time – which it wasn’t. Which is to say I call bullshit. NOFX are simply following their peers lead; an exercise in justifying inflated ticket prices.

For Fans Of: Lagwagon, No Use For A Name, Pennywise