The annual rib festival, known as Ribfest 2016, took place this weekend. Although the food was fantastic, the weather was anything but. The Pierrefonds skies opened up and tried to extinguish the barbecue flames of Ribfest 2016, in a futile attempt.

Storm winds and drastic rain suddenly assaulted the feeding. Some made a mad dash for their vehicles while others headed for the cover of the tents. A couple of stubborn folk, perhaps too hungry to care, refused to give up their spots in line and were drenched through to their skins. How she goes, I suppose. Like a river, the rain water came cascading down around our feet. Coffee colored from all the gravel on the festival grounds and relentless. And as fast as it had come, it had gone. Once more, the lines filled up again as the feast carried on.

See Also : Carifiesta takes to the streets of Montreal

The smell in the night air must have watered mouths for miles around. Calling in the flock like bells to sermon on a Sunday morning. Ribfest 2016 was a meat lovers paradise, and the food was divine. Focusing mostly on ribs and chicken, with pulled pork and sausages gracing some menus, too. Spiraled potatoes on sticks and deep friend onions and mars bars. Cold beers and live music. All that was missing was a football game and this could just about be considered a tail gate party! Evidence of inflatables for the kids laid lifeless on the parking lot floor, probably deflated once the strong winds had blown in. 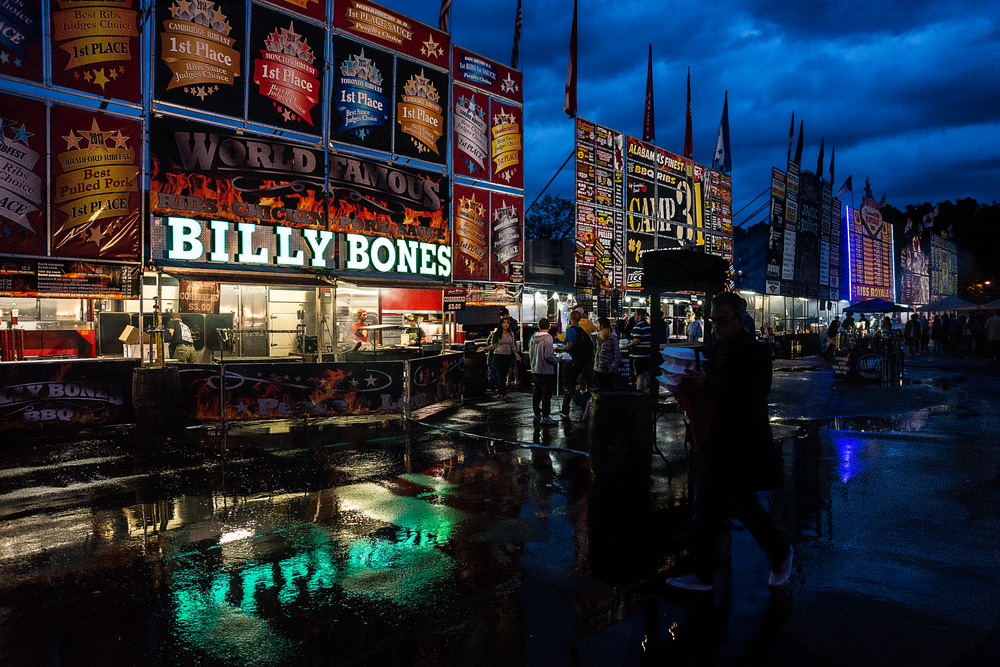 There was a ballet box to allow for the now replete to have a say in who’s ribs were the best and I wondered how I could reasonably sample from all the vendors myself, and sadly succumbed to the notion that I simply couldn’t. Though I did try. I left, full of belly and totally satisfied despite the squelching sound my feet made with every step I took. Arms bracing a take away that I had planned on being the next days diner – yet truthfully, never made it through the night. The smell was too much and it called to my stomach, and against better judgment, I obliged.