A new recording of Sacrifice, opening for Corrosion Of Conformity and D.R.I., at Toronto, Canada’s Starwood on November 24th, 1985 hits record shelves later this month. 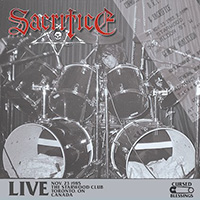 A day before Slaughter played the opening slot for Corrosion Of Conformity and D.R.I. at the same exact location, Sacrifice had the honor of opening the night. In fact, the second show that Slaughter played, was added as a surprise addition, due to the success of the previous evening.

Sacrifice was formed in Toronto by guitarists Rob Urbinati and Joe Rico in 1983. They played a prominent role in the ’80s underground metal scene in Toronto, and along with Voivod, Razor and Annihilator, they are considered one of the “big four” of Canadian thrash metal. Sacrifice released four studio albums before parting ways in 1993. Reuniting in 2006, they released their fifth studio album, The Ones I Condemn, on Brazilian label Marquee Records in 2009.

Still, it is pretty intriguing to hear the between song stage banter, and to be able to transcend time and experience a show such as this, holds its own form of magic. If this had been recorded off a soundboard, I believe it would have true historical value, and would have seen the light of day long ago. To say the audio quality contained within is raw is a serious understatement – complete with ear-piercing levels of guitar feedback. The question has to asked, though; do we really need this? Would you I have wanted to be there? Hell yes! Will I ever reach for this release in the future? Probably not.

The sound quality here is so piss-poor, so badly recorded and so painfully amateur that it boggles the mind as to why anyone felt the need to release it all these years later. It sounds as if recorded on a handheld walkman, and it was in fact recorded by a fan in attendance on that day, using a Sony WM-R15 walkman and a EDM-1015W external microphone pinned to a leather jacket – it says so right on the album sleeve. For those too young to know, this was an average walkman, nothing at all special.

At best, Live In ’85 should have been released as a digital-only release, on a pay what you wish method and that should have been the end of it. A recoding of this ill-quality, has no place being printed on physical media – and that is coming from an advocate for physical media. I fully understand the importance of preserving history, but sometimes, a piece of shit is nothing more than a piece of shit.

Limited to 500 hand-numbered copies on vinyl, an available through Cursed Blessings Records, also available as a digital release from the same location.

For Fans Of: Sacrifice, Corrosion Of Conformity, D.R.I