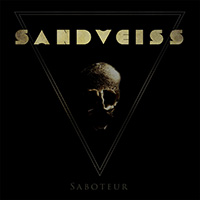 In that time, this four-piece group out of Quebec City, Canada, has released a few singles and have really refined the sound found on that debut record. Saboteur continues walking the same path laid out on Scream Queen. Solid, heavy blue-based riffs, with a whole lot of fuzz. The guitar work is nearly always intriguing and highly interesting. Polished. Great melodies and rhythms intersect with blues-laden passages – and at times, and aggressive gallop.

On the albums third track, The Masquerade, the stoner rock element is in full swing. This is also the lowest point of the album, however. It switches the tempo a tad too much. Drops the pace. Although the main riff is an interesting little ditty, at nine minutes and change, if serves more to take away from the overall flow of the full package. Following this up, is The Divider – which is one of the stronger songs in the package, and was also one of the two digital-only singles released leading up to the unleashing of the complete album. The other, also one of the stronger tracks – Dead Inside.

Another track that should mentioned as being a highlight, would be the penultimate track, Broken Man’s Mind. It too, is a slower tempo track, but has a lot more going on that The Masquerade does. Maybe its the placement of the tracks, now that I think about it. What if The Masquerade was two tracks later in the timeline? It would then slow the pace down, do its thing, then hand off to Broken Man’s Mind – which is similar in pace, and then into the slowest and more depressing track, Burning Ropes. Would be a solid way to end off the record, I believe. I’ve always been curious as to how songs get arranged.

The similarities in vocal styles between Sandveiss’ Luc Bourgeois and that of Colin Hendra from Wytch Hazel is, at times, uncanny. Not only do the pair sound alike, their deliveries are incredibly similar, too. Musically, the two bands aren’t all that different either. Both are strongly influenced by the likes of Black Sabbath and both have roots firmly planted in the Traditional or NWOBHM movement of the late 70s. Moreover, both are fantastic bands. It tickles me how this has happened. Two singers, thousand of miles apart. Anyway. My thoughts are getting derailed again. Back on track, Kieron! Lets go!

At times Bourgeois sounds like Load-era Metallica on the vocals. Especially on Sands Of Time. Only slightly, though. The man can sing, and that is possibly the driving force behind the band. They might not be re-inventing the wheel, so to speak, but they are good at creating within an already established system. With a singer that has the pipes that Bourgeois possesses, Sandveiss have a lot of bright light ahead of them down the proverbial tunnel.

Copies of Saboteur are available in digital or vinyl formats through the groups bandcamp page. Including a limited pressing on gold vinyl. Act quick!