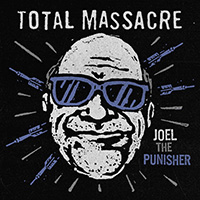 Like clockwork, we have us a new slab of hardcore from Total Massacre, only this time the social and political rage has been turned off, and instead a pal of the band is in the crosshairs. It would appear, the lads have a friend named Joel who is quite happy to go through life eating lunches on the tabs of others and spending all this time at Punk rock gigs. Sweet living if you can get it. They call him the Punisher. Maybe because he’s a hitman that takes on violence street gangs and thugs, or, more likely, because he likes to smash puny kids about in a most pit. This is all hearsay though.

Normally, Total Massacre focus on more political messages, but I suppose a little time off to poke fun at a friend is an amusing distraction from the every day. The track begins with a spoken part that says this one’s about a good friend of ours. It’s called fuck Joel. But it isn’t, is it. No! It’s called Joel The Punisher. That’s some sneaky shit right there. What a bunch of tossers. Like when you see stories on the news about cats stuck in trees; I’m running out of things to say about these digital singles. And it shows.

Musically, Total Massacre lay down a punishing style of mid-80s American hardcore that is both relentless and hard hitting. Normally quite political motivated or vehemently pissed off about some sort of social issue – and now we see that the band has a lighter side too. At Joel’s expense. You know, Joel… the Punisher! Anyway. Like I’ve said before, to the point aggressive guitar riffs, with no time for a solo or a whammy bar. No pinch harmonics. No djent. Nah. Big riffs. Breakneck pace buzzsaw guitars. Look. There’s a link to their bandcamp page at the bottom there. See it? Yeah that red bit there. Yeah. Click that and listen for yourself.

Throughout these digital single reviews, I’ve made light of the running time of each release. Well, this is the shortest one yet. One minute and one second in length. Seems strange to release a single minute’s worth of music at a time. I’ve mentioned this before so sort of feels redundant to mention it again. Those reviews are in the achieves in case anybody would like to have a read up on them. So I won’t drive the point home that they could have released several minute long tracks together, in a bundle, instead of these sixty-one seconds of music. Wait. I guess I just did say it again. How about that!

As is the case each month, Joel The Punisher and the previous singles are available over at Total Massacre’s bandcamp page. It is a name your price barter system, so if you’ve enjoyed what these guys have been doing, maybe consider throwing them a few bones. That is, help them pay for Joel’s lunch – the tosser.