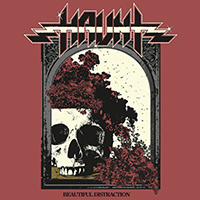 What are they feeding the guys in Haunt? They’re back with another new album, in rapid succession. Something that has become a sort of mantra for the group. I wouldn’t be surprised if they announce the completion of their new full-length before I get done writing about this one. Let me back that statement up with a quick fact. Haunt released not one, not two, but three albums last year. Who does that? Well, besides Haunt of course. What’s more, each was at least equal to the one prior to it. Rarely is it the case where anything comes frequently and without compromise in quality.

More impressive though, is the growth of the band – and when I say band, we’re primarily talking about one mister Trevor William Church here, undergoes with each release. Early recordings were similar in vein, treading along a path that was supposedly abandoned many moons since. Traditional heavy metal has never really disappeared but had shrunk to a small and faithful following, but it recent times, has rebounded and found its footing. Every scene has its trends, but a resurgence seldomly sees a return with such strength. Bands putting out records with such quality. Haunt are among those bands doing exactly that.

Beautiful Disaster is already the eleventh release to come under the Haunt moniker. In several ways, it is a natural progression from Triumph, Flashback and Mind Freeze, you know, the three albums they dropped last year. I’m just going to keep bringing that up until I get over it. There is still an overwhelming 80s hard rocking feeling to the guitar work. Great leads with seriously fantastic melodies. Hooks to land a great white. The shark. Not the band. Well, maybe the band too actually. But on Beautiful Disaster, it needs saying that the solos are far improved. They were good before. They’re just better now. Especially on the records fourth track, Face Of Danger. Again on Imaginary Borders. Church straight up rips.

Trevor William Church comes from a rocking lineage. His father Bill “Electric” Church was a member of Van Halen for roughly a decade. There is no doubting those years rubbed off on the younger Church during his upbringing. Leaving little wonder as to how Trevor is so proficient on practically every element a band requires. Church and Haunt might not be reinventing anything, but as is shown quite clearly on Beautiful Distraction, Haunt take on a tried and tested formula and nail it. Fool-proof, Precise.

There certainly is a formula to the music Haunt create. Powerful and jarring riffs that create a rhythm that pulses through. Accented by rollicking solos and thunderous riffing from a second guitar. Seems like the keyboards are sneaking more and more into the fray, too. The vocals are soothing but direct. To the point. There is an overall feeling of positivity about Beautiful Distraction. Like the first light of the day as the sun breaches the clouds.  That first sip of coffee that touches the lips, bringing revelation and wakening to a half-sleeping mind. Old yet fresh. Haunt are a breath of fresh air and I can’t gasp enough of them.

By the time concerts and touring return, Church and Haunt are going to have a hell of a time picking out what “new” songs to add to their set-list. There’s still another eight months left in the year, which means we’ll probably have a half-dozen more records out before tours are back out on the road again. I’m not complaining by any means. My wallet isn’t happy trying to keep up, though.

Be sure to grab your copy of Haunt’s Beautiful Distraction from their bandcamp page. Pre-orders are up and selling right now.