Our monthly dose of hardcore is ready for consumption, it would seem. 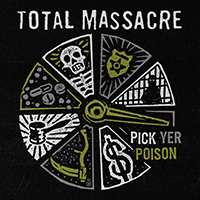 Yes, that does indeed mean that Los Angeles own Total Massacre have returned with another digital only single, their third of the year.

As was the case with the two previous tracks, each released in similar fashion, Pick Yer Poison is bare bones and to the point. Which is a polite way of saying these songs are bloody short. Once again, this new track barely breaches the one-minute mark. Eleven seconds over that pinnacle, if you’re keeping track. At this rate, we’ll potentially break the quarter of an hour benchmark by years end. Fifteen full minutes of music.

As has been the case with these singles, the messages delivered in the lyrics have been scathing. Political and social warfare. Pick Yer Poison is no different, with solid lines such as do you appreciate the choice between a hundred kinds of vitamins when they’ve made it so you can’t afford your insulin? Brilliant. Sad truth. One that needs a loaded gun aimed at it, and that is where Total Massacre shine brightest.

The track itself is a nice piece of American style hardcore. Hard. Heavy. Viciously rhythmic and with purpose. Taking influence from mid-80s punk and hardcore bands, especially the more politically charged ones, Total Massacre are a band worth watching out for. There’s no room here for any guitar wankery or fancy-fingered solos. No. This is quick, to the point, more meat than potatoes punch to the teeth hardcore. Powerful riffs and scream-along segments that could be considered a chorus.

I can’t decide whether this technique is a stroke of genius or pure insanity. On the plus side, Total Massacre are keeping there name relevant by constantly dropping new singles. Then again, will people keep checking in or will they bored of the schtick and seek out albums by other bands that have multiple songs to them. I suppose we’ll have to wait out the year to find out. It is fairly interesting to hear a band put out a new release in quick succession, by why only one song at a time, especially when the songs in question have ranged from just one to two minutes per track. Why not drop four EP’s on the year, each with three or fours songs each? That way, the group could also offer limited edition 7″ vinyl as well.

You can have a listen of Pick Yer Poison yourself, and have the option to grab yourself a copy on a name your price basis over at Total Massacre’s bandcamp page.