It didn’t take long for the UFC to get back to doing their thing. Just days after UFC 249 – the first live sporting event to air since the COVID-19 pandemic shut everything down; another fight card airs. 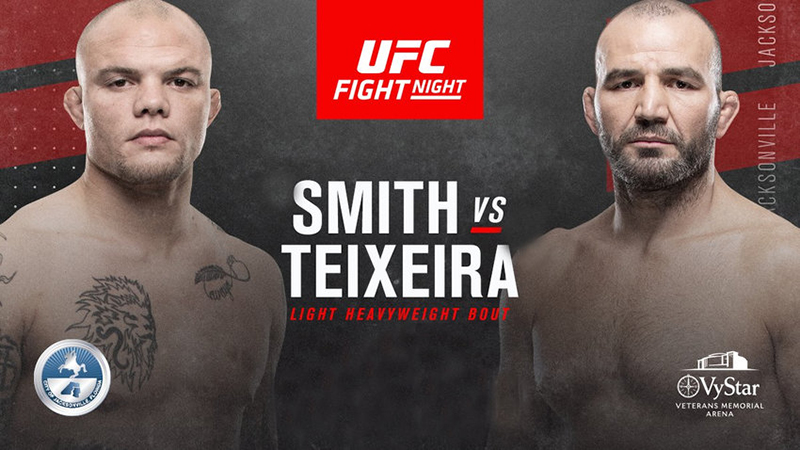 This event also took place behind closed doors, much like UFC 249. With minimal staff as and few people as possible in attendance. Many of whom were sporting surgical face masks and latex gloves. The eerily silent building felt strange. Being able to hear every blow – every punch and kick, blocked on landed, is strange. But stranger still, is being able to hear the breathing of the fighters. Every spoken word in the building. If nothing else; this is a new combat sports experience.

Teixeira, at 40 years old, may be running out of time as his career reaches its twilight years. He entered this contest on a three-fight win streak. Smith, meanwhile, comes into this clash off a 10-month layoff following two surgeries on his right hand. There have also been some heated words of late between Smith and Jon Jones.

Smith wasted no time, coming out firing solid jabs. It took two full minutes for a significant return fire from Teixeira – and moments later, the fight stopped as Smith took a groin strike. Smith took his time recovering. But once the action resumed, Smith was all business -Landing hard strikes. Teixeira was bleeding from the nose, and badly out-struck.

The second round was more of the same. Teixeira was throwing more, but had taken a huge blow to the left eye, that was visibly swollen. From that point, Teixeira was motivated and throwing combinations. catching Smith on a few occasions. This was a tough round to call, as both men had made compelling arguments for the points.

Teixeria though, owned the third round. He hammered Smith and hurt him badly. Dropping him and mounting him, dropping bombs under the close supervision of the referee. Full mount and dropping violent fists on the downed Smith. The referee was herd telling Smith he needed to see more. Meanwhile, Smith was covering us as

Teixeira was on Smith’s back and laying a barrage of knuckle on the man. Smith’s ear was swollen and gushing blood now. Somehow, Anthony Smith had survived the third round – but he was damaged. He had taken a beating most men wouldn’t have gotten up from. And there were still ten minutes remaining in the contest.

A swollen Smith entered the fourth round with the referees blessing, only to eat a thunderous uppercut off the bat. Smith was now throwing punches to ward his opponent off. Survival mode. An uppercut followed by another one had Smith downed again – and leaking blood.

The man they call Lionheart was showing how he hard earned his name. But Lionhart Smith was being badly beaten up. The fight how now completely shifted. And now it was Smith that was being dominated. Somehow, Lionheart survived another round. Surely, he wouldn’t be able to withstand much more of this kind of punishment.

It would come down to a fifth round, with each fighter probably having won two rounds each. Smith’s teeth were falling out. Literally. As valiant as Smith was, he succumbed to a forceful full mount and ground and pound from Teixeira. He had gone out on his shield – no surrender. No quit.

What a fight for the fans at home. This building would have had its roof blown off by a live audience. Strange times we are living, folks. Strange times indeed.

“Not bad for an old man” said Joe Rogan. And he couldn’t have been more correct. At 40 years old, Glover Teixeira was no riding four consecutive wins. Perhaps a title shot against Jon Jones is on the cards.

The main card began with a tilt between Thiago Moises and Michael Johnson. Moises earned a second round submission victory, after catching Johnson in a nasty heel hook.

Arovski earned a unanimous decision victory over his team mate, Philipe Lins. The two hulking heavy weights went the distance in a fairly close, back and fourth combat. Late in the third round, Lins landed a solid boot to the genitals of Arlovski – earning a prolonging of the round.

Ricky Simon took on Ray Borg. Simon took down Borg early in round one, but wasn’t able to keep him there. Both fighters are strong on ground – yet much of the fight took place on their feet. An area where Borg out-struck Simon, and landed several ferocious punches to the head. Both men attempted flying knees on one another in the dwindling final seconds of the fight.

Simon earned a massive seven take downs on Borg throughout the bought. A fight that would go the distance and fall to the face-masked judges to pick a victor. The winner by split decision, Ricky Simon. Simon had lost his two previous fights and a third loss might have cost him a spot in the esteemed UFC.

Simon fought without his trademark mullet. Stating “I just got married” and that he was trying to have a baby. That he “wanted back in the bedroom” – advocating to the possibility that the out-of-style hairdo might have been hindering his love life.

A light weight contest between Alexander Hernandez and Drew Dober came next. Hernandez complained of an eye-poke right as the buzzer sounded to end the first round. Meaning round two began with the doctor checking the eye of Hernandez. Right away, Henandez returned the favor on Dober.

Dober appeared to have stunned Hernandez late in the second round. Sending his opponent to the ground. By the experience of Hernandez helped him survive. But for the minute that followed, Dober was all over him. Landed heavy hands that eventually lead to the referee stepping in and calling the fight.

In the penultimate fight of the night, Ben Rothwell and Ovince Saint Preux went head to head. Early on, Rothwell landed several solid shots. Keeping Saint Preux to the outside of the cage. For more than a minute, Rothwell held Saint Preux in a headlock, content to lean his ample heavyweight frame down on him.

Round two, it became clear that both men were content to stand and brawl. Rothwell continued to bring the fight to Saint Preux for the majority of the round. But the dying seconds, it was Saint Preux’s turn to drop Rothwell with a stunning punch.

It would come down to the third and final round. Several times, it looked as if Rothwell was going to finished Saint Preux – and each time Saint Preeux was able to dig deep and find a counter assault of his own. It was becoming a high energy back and fourth war. Rothwell was stunned with a solid uppercut from Saint Preux, who was enjoying his best moments of the contest late in the third round.

The final twenty seconds were a slugfest. Two big men throwing huge punches with little regard to defense. Rothwell staggered and fell at the bell, as both men looked exhausted. This one was in the hands of the judges. By a split decision, the win went to Ben Rothwell.

The UFC will be back in action this Saturday, for their third event in eight nights. On May 16, Alistair Overeem takes on Walt Harris in heavy weight action. Then, Amanda Nunes faces challenger Felicia Spencer for the women’s featherweight title at UFC 250.