When the dust has settled, and UFC 249 is interred into the history books, it’ll be one that stands out. Not so much for the high profile line-up or even for the fights themselves. UFC 249 will be remembered as the first sporting event to take place since the world shut down and went into lock-down. Whether or not it was a wise choice to hold such an event, however, is yet to be known. Not fully.

On one hand, the people need hope. They need a reason to push on and to see a light at the end of the tunnel. On the other, it may have been presumptuous to hold such an event so soon. The risk may have usurped the reward. In time, the finer details will come to light. For the time being, lets treat this as a moral victory – and rejoice at the chance to witness a live sporting event again. It has been far too long. 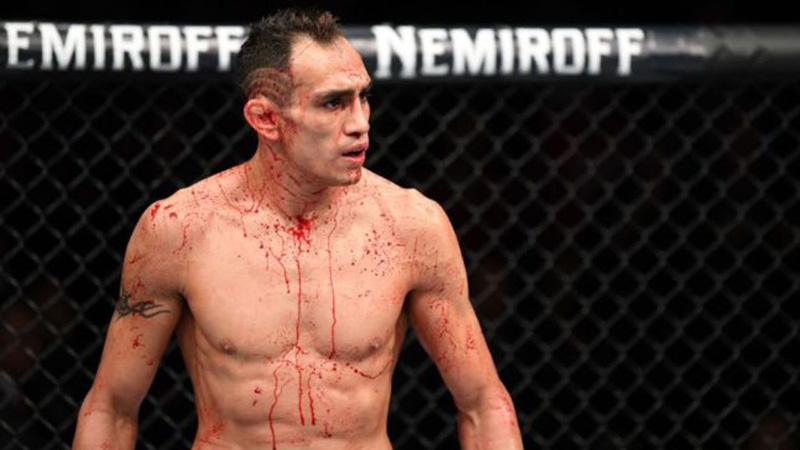 Moreover, the stories that have lead up to this event are quite fascinating in their own right. We’ve seen it all with this card. The good, bad, and the truly bizarre. This card will go down as a thing of legend. Firstly, the main bout that should have seen Tony Ferguson battle Khabib Nurmagomedov. That was scrubbed due to Nurmagomedov’s beliefs that the fight should not take place.  “The whole world should be in quarantine,” said Nurmagomedov.

The first bout between Nurmagomedov and Ferguson was scheduled in 2015. Nurmagomedov withdrew due to a broken rib. Then, in 2016, it was Ferguson who pulled out as a result of fluid in his lung. In 2017, Nurmagomedov fell ill and  had weight cut complications. Ferguson torn his knee ligament tripping over a power cord during a press conference in 2018. And now the COVID-19 is keeping the two apart for a fifth time. Should theses two premier combatants be scheduled for a sixth time, many will hold their breaths, as the smart money is on a cancellation.

Nurmagomedov would have potentially be stranded in the United States. Unable to cross borders and fly back to his native Russia. “I’m definitely upset more than you to cancel the fight … but I can’t control it all. The greatest countries and the largest companies of our time are shocked by what is happening — every day the situation changes unpredictably. But Khabib still has to fight, is that what you saying?” wrote Nurmagomedov on his Instagram account.

Furthermore, there was strong doubt about whether or not this event could even take place. UFC president Dana White’s stubbornness knows no bounds. His refusal to cancel this fight card was something to marvel at. And question. The card was initially scrapped, but a few weeks later, here we are. With a new main fight between Ferguson and Justin Gathje. White had even said he would secure an island for which his fights would take place on. Fight island. Instead, UFC 249 took place inside an empty arena in Jacksonville, Florida.

Then, the night before the fight, it was announced that Ronaldo “Jacare” Souza has tested positive. Not for a performance enhancing drug, but for a deadly virus. What a time to be alive. Which, of course, wiped out his fight with Urijah Hall. Two of Souza’s corner-men also tested positive. Proving again how somebody can be positive yet unaffected – and still be able to spread the virus to others.

The opening fight on the night, a preliminary bout between Vincent Luque and Niko Price was stopped short by the referee after Price suffered a gruesome eye injury. It was the second fight between the two. In the first, Luque had earned a win by way of submission, by this time around, we bore witness to an all-out war. Carnage. Three rounds of non-stop action and brawling. That is, until Luque dropped Price with a superb overhand left. The result was a grotesquely swollen eye, which forced the referee to call the fight. The UFC was back – and in punishing style. 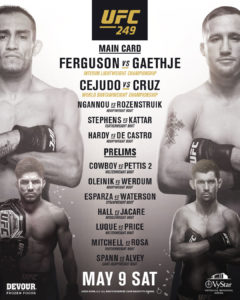 The UFC couldn’t have hoped for a better return – and this was just the beginning. Carla Esparza earned a split decision victory over Michelle Waterson to extend her current winning streak to three. Aleksei Oleinik took a split decision win over Fabricio Werdum – who had his first fight in two full years. Both men landed hard punches in a quality bout, but ultimately the ring rust and slow start would cost Werdum.

Donald “Cowboy” Cerone and Anthony “Showtime” Petitis renewed their battle, with a second meeting. And it was a war. Cowboy and Petitis laid the hurt on each other for three full rounds. Both men gave the other a beating. Both fighters landed significant strikes, as both put on a striking clinic. Cerone delivered his trademark high kick right to the chin of Pettis to end the third round. It then went to the judges where a unanimous decision win was handed to Petitis. One that may well be debated for some time. It would also be the fourth consecutive loss for the 37-year old Cerone.

The main card began with former NFL star, Greg Hardy taking on Yorgan De Castro.  Despite De Castro landing bombs, and kicking Hardy’s leg into a visiably swollen wreck, Hardy earned the upset. Hobbeling off with the unanimous decision win over De Castro. Another upset of sorts came for Calvin Kattar, who scored a second round knockout of Jeremy “Lil’ Heathen” Stevens. The two men traded explosive blows, until Kaffar landed a cranium shattering elbow to the face of Stevens – causing the referee to step in and stop the fight.

Ngannou versus Rozenstruik was next up to the octagon and the crowd went – well, there was no crowd. The arena was still empty. But let me tell you, had it been full, it would have exploded after Ngannou destroyed Rozenstruik in just twenty seconds. Nagannou started throwing wild punches.

A huge overhead right landed and stumbled Rozenstruik. The following overhand left, then a right missed their mark. But the next overhand right smashed into the face of Rozenstruik, as a fifth overhand right just missed the falling fighter. It was a stunning display. A sudden outburst that looked too wild to have been a game plan – yet turned out to be quite effective none the less.

The first of two championship match-ups came next. Henry Cejudo took on Dominick Cruz for the bantamweight belt. The first round was a close affair, with Cruz looking slightly more dominant. Display supreme footwork. Round two began with Cejudo landing some thunderous kicks to the body and stomach of Cruz. The round was again closely contested. Cruz had the edge in strikes but Cujudo did well to keep Cruz backed up towards the cage – keeping the center of the ring for himself. In the dying seconds, Cruz missed an uppercut and was punished for it, being force-fed a flying knee to the face. Cruz stumbled and fell and was pounced upon, eating a flurry of fists.

The referee called the fight much to the dismay of Cruz. Yet to Cejudo’s credit, he landed eleven unanswered punches leading up to the referees decision. Cejudo’s TKO win will be his final dance in the octagon. Cejudo, at 33-years old, announced his retirement. He leaves the UFC as just the second fighter to have defended titles in two weight-classes. The silence in the spectator-less arena was eerie – and not the send off Cejudo deserved. It has been said many times, that a fighter knows when to hang up the gloves – if that is Cejudo’s mindset, then the choice is right. Henry Cejudo walks away from a illustrious career, and his decision to make his ring walk with his Olympic gold medal hanging from a chain around his neck now makes perfect sense.

The final bout of the night, Tony Ferguson versus Justin Gathje, on paper, looked to be a barn burner. A knock-out, drag out tilt for the ages. Round was a savage display of beutiful boxing and hard, hammering strikes. Both men landed beautiful punches. Hard kicks too. Gaethje seemingly landed the better strikes. At one point, DC said “We have to talk quitly – they can hear us n there”. Round two was a blistering display from Gaethje, who was swinging for the fences. Ferguson ate punches that would have put many to sleep. Power bombs. Then, in the final ten seconds of teh round, Ferguson lands a devastating blow on Gaethje, he drops and gets back to his feet just in time to be saved by the bell.

Gaethje started round with a little revenge. Landing heavy hands on Ferguson. And Ferguson’s face began to show signs of the punishment he was taking. First his left eye began to bruise and swell up. Then a cut under the other eye opened up and Gaethje started to land punches with ease. Big punches. Brutally hard shots. Ferguson staggered but somehow stayed on his feet. Ferguson can can take a beating.

This is the most punishment Ferguson has ever been dealt in his career. Gaethje continued to land bombs. Any fear of him gassing out looked to be nil. Gaethje was picking Ferguson apart. Piece by piece. Inch by inch and punch by punch. Ferguson was limping. He was battered and beaten. This is the fighter with the longest running winning streak in the division, eating haymakers from an underdog who took the fight on short notice.

A huge shot explodes of Ferguson’s chin. Then another. And another. This was going to be Gaethje’s night. In the end, a jab stopped the fight. A jab to the face of a man that ate an arsenal. But none the less, a jab sent Ferguson into the netherworld. As Joe Rogan put it, Ferguson was practicing drunken kung fu following that fatal jab. And referee Herb Deen stepped in having seen enough. Heavy weight champion and commentator Daniel Cormier said “twenty-four minutes of getting beaten up will do that to anyone”. Gaethje was likely on his way to a referee decision anyway.

Ferguson however, didn’t seem to pleased at the beating he had taken. Justin Gaethje attempted to hug the man he had pummeled through five grueling rounds, only to be shoved away. Tony Ferguson has never been known for his good sportsmanship.

The crowd would have gone crazy – but this is bizarro world and we can’t gather at events. Justin Gaethje threw off his interim belt, stating “I’ll wait for the real one”. Now, any talk of a match-up between Tony Ferguson and Khabib Numagomedov will have to go through interim champion Justin Gaethje.

Watching a UFC event without a crowd felt strange. Witnessing it go down with everybody that was permitted to attend do so in masks – was surreal. And more than a little creepy. We truly are living in strange times. So much so that American president Donald Trump congratulated UFC president Dana White on hosting the event. From one president to another. What a peculiar time to be alive.