As the bands moniker suggests, Panic Problem sing about panic problems. Off the bat, before even pressing play on this record. Panic Problem had my respect. Simply for bringing attention to mental health issues. Something that is too easily passed over in modern society. According to the World Health Organization, One in four people in the world will be affected by mental or neurological disorders at some point in their lives. That is an astounding number. 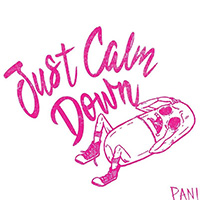 As I write this, the world is experiencing mental anguish. As a collective whole. Be it from being confined to homes or through fears of what is to come, fear of the unknown. Some for the first times in their lives. Hopefully, people that shrugged off mental illness in the past, will leave this pandemic with a new found sympathy for others. A new level of understanding. Hopefully some good will come from all this. That we learn the lessons presented to us and grow as a collective humanity. Lets hope. Moreover, lets all do our part to make this a reality.

Until then, lets investigate the debut full-length from Baltimore’s Panic Problem. Lets start off by saying that “Just Calm Down” isn’t breaking new ground here. It follows formulas laid down by those that came before them. Besides the mental health concept; there is little else here that hasn’t be heard before. This isn’t a damnation – not at all. Just a quick reality check. A disclaimer of sorts.

What we do get, is feel good, happy and very upbeat Pop Punk anthems. Feel good tunes to drown out the hardships of just existing. It may have been done before, but Panic Problem are continuing to carry a genre of Punk towards the future. Some things don’t require great innovation. Some things are fine just the way they are. And those things just need to be expanded on. That is the case here, and what Panic Problem have managed to do with “Just Calm Down”. They’ve taken something they adore and made it their own. And why not. With “Just Calm Down” – you get what is advertised.

The worst thing you can do, is tell someone that is having an episode to calm down. It never ends well. Telling someone to calm down, more often than not, will elevate a situation. But lets not dwell on that too much.

The musicianship here is applaudable – and the band are a tight-knit bunch. Musically at least. This album reeks of aplomb. As I said earlier; roads that are laid down were meant to be walked on. After all, you wouldn’t build a house on a crooked foundation. Less you find your peas rolling off your plate and onto the dinning room floor.

These are quick, high-amperage fun songs with all sorts of opportunity’s for an audience to sing along with the band. Anybody remember audiences? I think this home confinement thing is starting to affect me more than I had previously realized. As always, I digress. Panic Problem provide a much needed dosage of positivity in a world of negatives. Creating music that can be both uplifting but also settling as background soundtrack to whatever it is you’ve got going on. Best pared with a sunset, where the days last rays beam down on the face. Warm and free. Perhaps a Pina Colada in hand. I hereby vow to test this theory as soon as possible.

Four of the eleven tracks here come from the bands debut EP that dropped last February. And I must say, “Stormy Weather” is still their strongest track. It’s such a strong and uplifting number. I can’t decide if its down to the group realizing their mission. To take something that is hard for many to deal with, such as a storm, and making it brighter. Or if its the pluviophile in me. Perhaps a combination of the two. Either way, Panic Problem’s adoration for the mid to late 90s Punk scene is really apparent through this record. It was a fantastic era that is still as fresh today as it was then. This record makes me want to travel 2000 light years away. To sip a soda and jump in a lake and wonder who wrote Holden Caulfield? (Sorry. I’m cheesy)

Panic Problem is Neal Page on vocals and guitar, Tom Gilhuley on vocals and drums and Jeff Brigman on bass and backup vocals. The band was originally formed in 2018 by Page, Gilhuley and Sue Werner on bass. In Baltimore, Maryland. Werner was soon replaced by Brigman as Werner’s calendar was quickly filled up due to the success of her other band, War on Women.

Overall, “Just Calm Down” is a mighty fine debut. I’ll be very interested to see where this project goes in the future. For now, copies of the album can be snagged through the bands bandcamp page. Available digitally or on sexy pink vinyl. I am such a sucker for colored vinyl that matches the album cover. Its an OCD thing. Virtual, safe, social distancing high fives to the Panic Problem crew.

For Fans Of : Old Wives, War On Women, Masked Intruder