Before we get to the musical portion, there’s something I need to get off my chest. It strikes me as disrespectful to name your band Wytch Hazel; then sing from a Christian perspective. 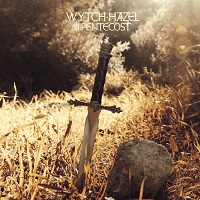 Religion is one of the greatest evils known to mankind. One of two great dividers of humanity, greater even than man’s unsatisfiable thirst for riches. More people have lost their lives to religious persecution than any disease or pestilence. Remembering Salem, for example, leaves a band moniker such as this, with a lyrical subject matter as such found throughout III : Pentecost in piss poor taste.

This goes for all religions. There is no need to broadcast your beliefs in any fashion, music included. Believe what thou wilt – but keep it to yourself. This goes for Satanism also, which is a Christian construct anyway. I’ve always felt religious lyrics cheapen a piece of art.

All that aside, Wytch Hazel’s third full-length album is an astonishing piece of heavy metal. It has everything I could hope to find on a record. It is truly a beautifully constructed piece of work. There are great melodies and fantastic hooks and riffs. The vocals are fantastic and the band as a whole, have hit a home run – Clean out of the park.

On I Am Redeemed, the lads are in peek form, throwing out big riffs with keys that 70s era rock bands would have been proud to call their own. It’s a total banger of a song. Despite my dislike of the lyrics, as mentioned above, I can’t help but belt out the words along with the track. This is a superbly crafted piece of music, that harkens back to a grand period in rock history, without feeling aged or dated. Quite the contrary. Despite its old formula, Wytch Hazel have crafted something that will continue to stand the test of time.

There’s a real sense of traditional metal here, harping back to the late 70s NWOBHM movement. A style I have long adored. On Dry Bones, Wytch Hazel show off their ability to craft phenomenal song structures. There is a segment early on the track, where the bass line throbs along with a great piece of vocal work overlaid. From that point on, the song is a skull nodding head banger of a song.

Wytch Hazel are able to create such great atmosphere in their music. Portray strong emotions. I read somewhere, many moons ago, that the goal of any artwork is to stir emotion in its audience, and if that is the truth that I believe it to be, then Wytch Hazel have a success of their hands here.

I seriously hope the religious aspect is toned down significantly for future works.

You can secure yourself a copy of this record here. As well as check out their previous works too.