I’m going to do something here that I never do. Ever. And that’s give a one word review for those with short attention spans. Or for those that just need confirmation about this new Lamb Of God record. Ready? Banger. This is a fucking banger! 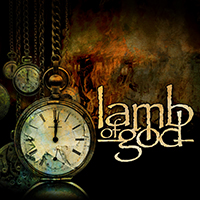 Now, for the rest of you that are looking for something more in depth – read on. We’ve got you sorted. Because Lamb Of God are a no-nonsense type of band, you can fairly accurately assume what you’re going to get here. For the most part. And that is a hard hitting slab of rock hard angst and metal. A slap in the face. The reason why you’ll lose your driver’s license to speeding tickets and why you’ll be calling in sick at work, suffering from whiplash. Oh yes, my pedigree chum, this one is going to leave marks.

I was lucky enough – or old enough, to have experienced the way Pantera landed like a meteor on the music world, leaving a city-sized crater as they did. And if we’re honest, nobody has been able to emulate that since. At least not in the mainstream metal sort of way. Perhaps we should call it accessible metal over mainstream – this isn’t your creepy uncle’s Limb Bizcuit we’re talking about here. Pantera broke the mold but left a gaping hole when they left us. Obviously, we’re not counting “Reinventing The Steel” in that sentiment. You could physically feel all the reasons Pantera disbanded over in those songs.

That void is owned by Lamb Of God. If ever there was any doubt in that statement, it’s gone now. This record cements their legacy and hands over the throne. Before we go any further, let’s acknowledge that Lamb Of God have been building towards this status now for a long time. This isn’t an overnight success story. This is a.lineage that has evolved to this fantastic record. This is the result of blood, tears, hard life lessons and perseverance.

I’m certain Dimebag Darrel himself would have given his approval for the ridiculously good opening riffing to “Checkmate” , the albums second track. Again, I feel the need to mention Pantera and compare them to what the album has achieved. I haven’t felt this strongly about a metal record since The Great Southern Trendkill knocked my socks off. These two records are both able to sustain heavy big riff work with venomous vocals. Melodic and groove laden, jack-hammering tunes that are going to cause thunderstorms in the mosh pits. If ever that sort of thing returns. When I should say. Let’s stay positive in these uncertain times.

If Dimebag is to be summoned for “Checkmate”, then it is Jeff Hannerman who is channeled through the Ouija board for “Resurrection Man”. So many guitarists have tried to capture Hannerman’s tone and guitar work, but this is perhaps the greatest attempt in quite some time. This song flat out slays – if you’ll excuse the quite blatant, and fully intended terrible pun. It is a highlight track on a record without filler. Then again, I could say that about at least four of the tracks on this stellar new album.

Hatebreed’s Jamey Jasta joins Randal Blythe on the microphone for the albums seventh offering, “Poison Dream” . And Jasta sounds like he was primed and inspired for his part on this song. Always aggressive – yet positive, Jasta and Blythe shred their vocal chords on this one. Spitting fire and upping the intensity that much more. Which is a feat in itself. Blythe then brings out the legendary Chuck Billy of Testament for the albums next act. Which again is a fantastic duet. “Routes”, the records eighth offering, really benefits from Billy’s silky smooth singing.

The ten tracks on this self-titled Lamb Of God album show no cracks or signs of wear. No fault lines or rust. If you’re going to name an album after your band’s moniker, this is the way to do it. This, their eighth album and first in five years, is perhaps their most creative, most accomplished collection of music to date. That itself is saying a lot, as Lamb Of God have come leaps and bounds from their humble beginnings to being perhaps the greatest metal band of their era. Although Slipknot may like a shot at that heavyweight belt themselves.

I can clearly remember my first time seeing Lamb Of God. They were the opening band on a night that had five bands play. The opening band. Let that sink in. I still have the ticket stub to prove it too. Even then, there was an ambiance about Lamb Of God. Somehow, you just knew that these lads were going places and, all the legal stuff aside and behind them, it feels like they’ve fully arrived with this album.

So, kids, when live music returns to your local venues, remember this. That opening band that you’re skipping out on to slam home a few quick beers in the alleyway with your pals might just be the next big thing some day. Support those opening acts.

The stellar new Lamb Of God self-titled album is available for pre-order from this location.