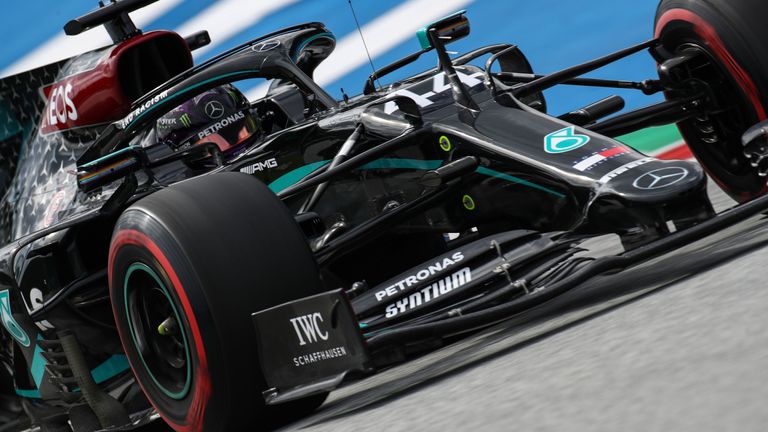 It has been a tremulous first half of the calendar year this far. A year that is already guaranteed several chapters in future history books, and finally, after 214 days – Formula One is back on track. Once race weekends began being postponed due to the COVID-19 pandemic, then cancelled altogether, hope began to dwindle for the 2020 season. Yet here we are, sporting face-masks and racing solely to a home audience – but racing just the same. Austria becomes the opening round of the 2020 campaign.

Friday’s practice sessions began in much the same manner as the previous season ended. With Mercedes dominating the field. Lewis Hamilton again lead the way with teammate Valtteri Bottas not far behind. The Mercedes, not carrying a beautiful black and teal livery, in support of the Black Lives Matter movement, soared around the circuit at break-neck speeds. Red Bull Racing’s Max Verstappen finished third in the opening practice session. But a very spirited and surprising Racing Point turnout yielding results in the second session, finishing third behind the dynamic Mercedes duo.

At the end of the Friday sessions, the 2020 Formula One season had its first tidbit of controversy. Red Bull Racing filed a complaint against the stunning Mercedes team over its DAS – Dual Axis Steering. Somewhat of an expected move, as many pundits had been commenting on the unusual set-up of the Mercedes cars from as far back as February. In early testing sessions, both Hamilton and Bottas were seen pulling and pushing on their steering systems. “We have a system in the car that introduces an extra dimension to the steering for the driver that we hope will be useful during the year,” James Allison, the Mercedes technical director said. And after a brief consultation session, the new DAS system was deemed legal by the FIA stewards. Much to the chagrin of the Red Bull Racing team.

“We have a system in the car, it is a novel idea called DAS, that’s interesting and it just introduces an extra dimension in the steering for a driver, that we hope will be useful during the year. Precisely how we use it is something we’d rather keep to ourselves” said Allison back in February.

The third practice session was more of the same, as the now black Silver Arrows run amok about the Grosser Preis Von Osterreich circuit. Hamiltion posted his fasted time yet, fastest of the practice sessions, with a scorching time of 1:04.130. Bottas again was second on fastest, with Verstappen earning a slight advantage over Sergio Perez of Racing Point. The Ferrari of Charles Leclerc followed that. Red Bull’s Alex Albon, Ferrarri’s Sebastien Vettel and the Racing Point of Lance Stroll  followed them. With the Alphatauri, formerly Torro Rosso, of Pierre Gasly and the McLaren of Lando Norris rounding out the top ten.

Lewis Hamilton’s total domination of the opening day is nothing surprising nor shocking to those up to date on their motor racing. Although the most impressive outings in the debut Qualifying session came from the wheels of Red Bull’s max Verstappen and Racing Point’s Lance Stroll, the two Mercedes cars seemed to put in just enough to ensure a birth in the next session. Nothing we haven’t seen before. The Williams of George Russel looked to be sitting pretty until the final seconds of the session, where Roman Grosjean and Kevin Magnussen usurped his time, bumping the young Britain down to seventeenth position. Despite not getting out of the first qualifying session, it is a better showing from Williams than was seen last season, and hopefully signs that the Williams team are indeed heading in the right direction. Joining Russell on the elimination list, were Kevin Magnussen, Antonio Giovinazzi, Kimi Raikkonen and Nicholas Latifi.

The second session too, had a few surprises in store. The drama was coming thick and steady, as the Ferrari’s of Charles Leclerc and Sebastian Vettel seemed to struggle with handling. Meanwhile, the dynamic Mercedes duo were once again flying around the shortest track on the calendar. This time, Bottas put up the fastest time with Hamilton in hot pursuit. The McLaren of Lando Norris held third position until the dying seconds of the session, where Alex Albon threw his Red Bull into third from thirteenth. By doing so, he bounced the Ferrari out of the top ten, into the elimination places. With Leclerc placing just tenth, and Vettel exiting in eleventh, there must surely be a lot of questions being asked in the Ferrari garage. Joining Vettel, were Pierre Gasly, Daniil Kvyat, Esteban Ocon and Roman Grosjean.

The top ten shootout again had a lot to keep racing aficionados on the edges of their seats. Bottas had a slight advantage over teammate and defending champion Lewis Hamilton. Then, with just seconds to go, Bottas was overly eager to increase his lead and over shot a turn, sending himself off into the gravel and into a countryside drive through the daises. Hamilton, however, was not able to capitalize and came home second, as Mercedes once again will start first and second in tomorrow’s race. Max Verstappen will start in third, with the McLaren of Lando Norris beside him on the second row of the grid. In fifth is the Red Bull of Alex Albon. Sergio Perez in sixth. Charles Leclerc in seventh, Carlos Sainz in eighth. Lance Stroll puts a second Racing Point into the top ten and will start ninth with Renault’s Daniel Ricciardo rounding out the top ten.