After a lengthy delay, the 2020 Formula One season finally goes lights out on its first race of the season. Motor sports the world over breathed a creative sigh as a slight hint if normality returned to our lives. Following solid practice and Qualifying sessions in the two previous days, that were chocked full of controversy and drama. 4000 COVID-19 tests were conducted ahead of this race weekend, with not a single one coming back as positive. This race at the Red Bull Ring in Austria, also marks the first time a season starts with a race in Europe.

Yesterday, Red Bull Racing lodged a complaint against the DAS (Dual-axis Steering) system implemented by the Mercedes team only to have the stewards rule it completely legal, leaving Hamilton and Bottas to continue to use their new application. Yet Red Bull Racing’s complaints weren’t over and done with just yet. In the dying seconds of the third qualifying session on Saturday, another incident has the Red Bull garage in a tizzy. Valtteri Bottas, who was currently sitting on the fastest set time and provisional pole, over shot a corner and ended up off track in the gravel pits. Doing so kicked up a cloud of dust for Lewis Hamilton to drive through. Although a yellow flag was shown, it appears not all light boards were yellow lit. Hamilton claimed the one he was shown shone green, and he was already in a low visibility situation due to the dust cloud that had been kicked up.

Hamilton would put up a time good enough for second on the grid, while Red Bull’s Max Verstappen would place third. Once again, Red Bull would file a complaint with the stewards against Mercedes, claiming Hamilton should be issued a grid penalty. Stewards disagreed and Red Bull protested the stewards decision – and the decision was over-turned, bumping Hamilton from second down to fifth on the starting grid. Verstappen now sat second, but the big winner here was McLaren and Lando Norris. McLaren hadn’t had a car start as high as third since 2016 – ironically also in Austria.

The pressure though, was all firmly on the shoulders of the two Ferrari pilots. Charles Leclerc could only manage a tenth place start, while Sebastian Vettel was eliminated in Q2, and starts eleventh. Vettel, who begins his final season as a member of the Scuderia Ferrari, has yet to secure a seat elsewhere for next season. A strong performance here and the rest of the way could be pinnacle in his Formula One future. 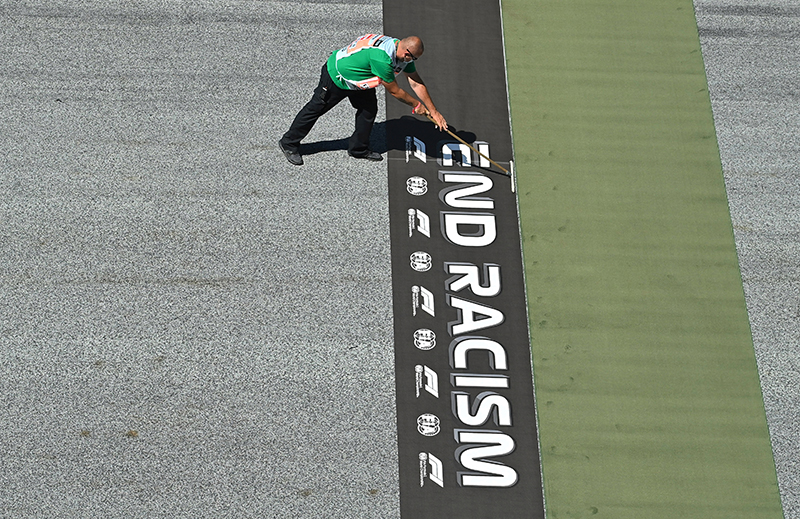 A monumental moment would take place prior to the race. As all twenty drivers stood shoulder to shoulder, wearing black tee-shirts sporting a message of “End Racism” on the back. Some took the knee. Not all. Lewis Hamilton has been rather vocal about the lack of ethnic and racial diversity in the sport of Formula One, and given all that has been transpiring around the globe, the timing was right to send a message. Mercedes made a statement by changing the livery of their Silver Arrows car to a black with teal trim, in support of Lewis Hamilton and the Black Lives Matter movement.

Valtteri Bottas got off to a flying start. Verstappen, Norris and Albon too made perfect launches, leaving Hamilton to battle for position. Bottas was soon off to the races, with the two Red Bull’s giving chase. Albon and then Hamilton found their way past Norris and his McLaren. There was then a solid battle between Alex Albon and the defending champion Lewis Hamilton had a great bit of racing, with Hamilton edging out the sophomore. The Red Bull of Max Verstappen then gave up the ghost and coasted back to the pits in last place. Seemingly due to a defective power unit. All of a sudden, Hamilton was back up into second position and the two Mercedes began to run away with the race. All this, withing the first ten laps of the race.

On the eighteenth lap, the Renault of Daniel Ricciardo suffered engine troubles and too was retired. The Racing Point of Lance Stroll also radioed home to report issues with the car as well, and all of a sudden, the four-time world champion, Sebastian Vettel, had moved his Ferrari up into eight place. While the two Mercedes cars seemed to be disappearing  into the distance, a lot of drama was unfolding. Lap after lap, Hamilton was setting the fastest lap and slowly gaining on his team mate. Three laps later, Stroll would drive his pink panther straight into the garage, becoming the third retiree of the day.

Meanwhile, Esteban Ocon, in his return to Formula One – becoming the first French driver to drive for Renault since 1985, was in hot pursuit of the Haas of Kevin Magnussen, when the Haas suffered right disc-break failure and went careening off track into the gravel. As a result, a safety car was deployed. Hamilton, who had closed the gap on Bottas to just three seconds, was now right back behind Bottas. As cars scrambled to pit, the Racing Point of Sergio Perez and the McLaren of Lando Norris almost collided on pit lane, as both were released at the same time. Perez became the only car not running on hard tires. With not even half of the race yet run, the 2020 Austrian Grand Prix was already rapidly becoming a classic.

The safety car wasn’t in for a full lap before more on track drama would occur. Sebastian Vettel tried a maneuver to over-take the man that will be replacing him next season, Carlos Sainz, where there was no possibility of passing the McLaren. Vettel and his Ferrari went for a spin, sending him to the back of the grid, with only the lonely Williams of Nicholas Latifi behind him. Meanwhile, Sergio Perez was make full usage of his fresh medium tires, passing the other McLaren of Lando Norris for fourth place. Hamilton was now less than a second behind Bottas as yet another one-two finish from the Silver Arrows looked more and more inevitable.

With twenty laps to go, both Romain Grosjean and George Russel suffered engine failures, bringing out the safety car once again. Both Mercedes cars were having gear box issues too, and as a result had turned down their engines and were trying to avoid riding the curbs along the way. This race was far from done. Again, as soon as the safety car came in, there was an incident. The front right wheel came off of Kimi Raikkonen’s Haas, sending him hard into the wall. At a moment where Albon and Perez were in a dog fight for third. The safety car was once again deployed. Seven cars had now been retired and another fifteen laps remained.

Once again, as soon as the safety car came in, there was drama. Albon made a move on Hamilton and the two touched. Albon spun off track and all the way back to last place. Taking away his chance at a first career podium finish. Seconds after Charles Leclerc made a late and dashing move on Perez for third, the stewards awarded Hamilton a five second penalty for his encounter with Albon. Hamilton’s podium finish also now in peril. Meanwhile, a five second penalty was also handed out to Perez for speeding in the pit lane. Then Norris and Perez came together, with Norris emerging in fourth place. Three seconds behind Leclerc. And at the same time, the Red Bull of Alex Albon seemingly suffered engine failure. And Daniil Kvyat had a tire blow out and off he went – only eleven cars remained with a handful of laps to go.

Bottas held on to win the race with Hamilton coming in second, but with a five second penalty. Meaning that Leclerc would usurp Hamilton for second, and Lando Norris would earn his first podium, jumping Hamilton, who would official hold fourth place. What a race it was. Who often do you finish last, just one place out of collecting points. That was the case for Latifi in his Formula One debut.

What a weekend it was, and we do it all again in a weeks time. Bottas upon exiting his car, took the knee again. There are to be new rules in place to level the playing field as of next year, but the on track action got a head start in that respect, as three different teams stood on the podium once the dust had settled.