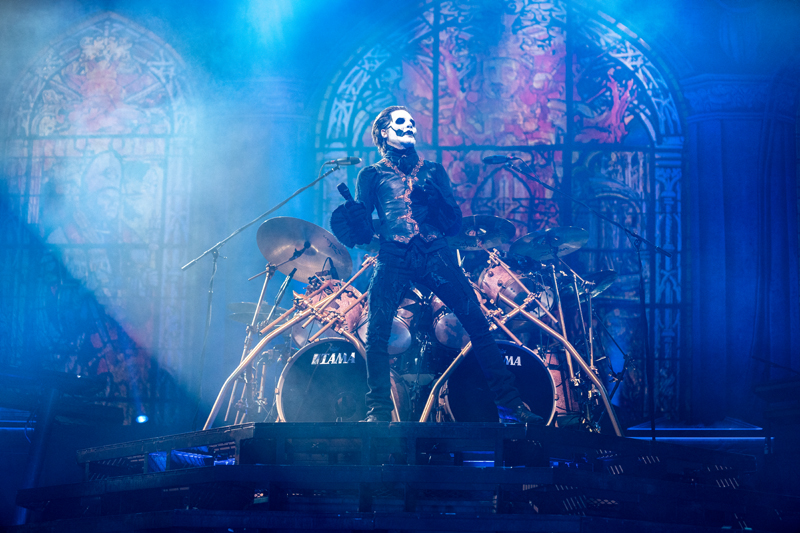 Sweden’s masked marvels, Ghost, stopped off in historic Quebec City for a gig at the Centre Videotron as part of their Imperatour.

Of all the places I have dragged my weary old bones to, Quebec City is among the most beautiful. It has so much character and history, its architecture is absolutely gorgeous and the people are warm and welcoming. Walking about Vieux Quebec is like traveling back in time to the age of explorers – buildings made from stone and brick, up and down rolling hills. The city itself is a fortress that ages back to the beginnings of nations like Canada and the United States themselves, to a time when Europeans shamefully came and stole land from the Natives.

Tonight, Ghost are playing in this historic city, which fills perfectly fitting given their image and sound. Somehow, the music of Ghost seems to fit perfectly with this picturesque city. Hours before the show, and people are wandering about town going about their business already adorned in Ghost tee-shirts and hoodies.

Strangely enough, through all my trips to this gorgeous part of the world, I have yet to step foot inside the Centre Videotron arena, an arena built with the hopes of bringing back an NHL franchise to the city which has not yet happened. It does however house the Quebec Ramparts junior hockey team, that is managed and owned by Habs legend Patrick Roy. That ends tonight! (Wait, not the Patrick Roy part, the bit about my never having stepped foot into the arena.)

First up on stage, was British Columbia’s Spiritbox, a metalcore band built around the husband and wife duo of guitarist Mike Stringer and vocalist Courtney LaPlante. For just under a half-hour, Spiritbox stomped through their brand of groove-laden metalcore, with LaPlante switching from guttural bellowing’s to a soft, almost pop vocal. In fact, there is a strong pop or commercial aspect to Spiritbox – songs such as Rotoscope, for instance, show these leanings.

LaPlante marched about her stage, commanding the attention of the crowd that was still flowing into the building, while Stringer and bassist Josh Gilbert crisscrossed from stage left to right along the oddly shaped stage set-up.  Reminiscent of bands like Evanescence – and not just for the fact that they have a female vocalist, Spiritbox used their limit time in the opening slot to introduce themselves to the Quebec City faithful.

Fresh off the release of their fantastic new record, Hushed And Grim, Georgia’s Mastodon return to the province, having bypassed Quebec City on their jaunt earlier this year with Opeth. Easily one of the biggest names in modern metal, Mastodon have been crushing stages for quite some time now, playing every festival known to man and touring tirelessly. Their show earlier in the year was rather disappointing, as it was played in near darkness, while screens behind the band played bland and boring lackluster video clips. Sadly, that again was the case tonight in Quebec City.

All was not well – and not just the lack of lumination and flat visual performance of the band. Mastodon sounded awful. The more heavy segments sounded like when playing a home stereo through burst speakers. Resonance overkill. And the lighting, which I must mention again, was atrocious – the members of Mastodon performed for the crowd, swinging guitars about… only they were barely visible which made their efforts moot. Why bother? You’re in total darkness and can’t be seen save for perhaps the first three rows.

Sure, your backing video screens are neat and all, but people came to see the band – not watch a trippy video with silhouettes stood in front of them. We could do that at home and with far superior sound as well. In fact, the videos were the exact same as those they played on their last tour with Opeth. Recycled boredom. I feel for the fans that came out solely for Mastodon. For the majority of their set, Mastodon stood listlessly in place, looking like a group of guys that were forced at gun point to be up on stage.

Now, it needs saying that I am a fan of the band – and was looking forward to seeing them, but following their last two sets, I will probably skip on their next visit. There’s just not enough to warrant the exuberant ticket prices here – poor sound and there’s only so long you can gaze into a video screen before growing incredibly bored. I have watched this band grow from small venues right up to arena tours and I can’t for the life of me understand why the need to move to such a boring live show.

By the time Tear Jerker was played; a fantastic track off their newest record, I was almost asleep. A fancy laser beam bouncing off the area ceiling might be appealing to a cat – but I found it monotonous after about four minutes. Guys, this is an arena tour! Put some effort into it.

I really don’t want to come across as negative here, but there was very, very little to be positive about. Their music is great – the new album is Mastodon at their best yet, but the sound was so bad that those songs were annoying to hear, and not at all enjoyable. There was nothing to watch, as the band was obscured by the lack of light, and the visuals on screen should be aborted. How disappointing.

There are few, if any, that can match the live show that Sweden’s Ghost bring to a stage. Or the charisma and charm of Tobias Forge, best known as Papa Emeritus IV. There are very few bands around today that get me as charged up prior to a show – or a ritual, to use a more apt title, than Ghost constantly does. However, given the gruff sound that had been bestowed upon us by Mastodon; I half-feared that this might carry over to Ghost’s set – but no, the sound was crisp and crystal clear, and Ghost were as tight as a nun (if I wasn’t already hellbound: I surely am now) replicating the sound on their studio recordings with perfect precision.

The classic rock between sets turned into a quarter hour of church choir music, while annoying teenage girls shone their cell phone lights in circles for what felt like an eternity. And then the curtain lifted to reveal Ghost, and the night’s entertainment began in earnest.

Prior to the gig, the banter backstage was that the stage had been moved forward to accommodate the number of tickets sold – which given the population of the city, would never out-sell a city like Montreal, or neighboring Laval where the tour stops off tomorrow. That perhaps explains the ghastly amount of smoke that was pumped into the arena prior to Ghost setting foot upon it. In a secular haze (see what I did there?) emerged the band most had come out to see, and with bang began Kaisarion as the crowd lost their shit.

Next up was Rats, just two songs in and already Ghost are banging out some of their most popular tracks in what was to be an omen to how the rest of the night was going to unfold. Five of the songs played on the night came from the newest album, Impera, as the band are touring for that album. The aforementioned Kaisarion, Little Miss Sunshine, Spotlight, Spillways – and Hunter’s Moon, which was also on the Halloween Kills movie soundtrack.

Of course, the hits were covered too, for the most part. Cirice, Dance Macabre, Faith and Mummy Dust – complete with confetti cannons that blew gold foil and Ghost dollar bills out across the floor. At this point, I’d like to once more thank the girl that gave me one of those bills while waiting in line at a casse-croute for a late night Philly steak poutine. Such gestures can really amplify an already fantastic night. The poutine was bloody divine as well. Vive le Quebec.

One of my favorite segments from the previous tour, of which I caught the Montreal and Ottawa gigs, was the bringing out of Papa Nihil for a saxophone bit on the track Miasma; so when that very same song began this time around, I sat up and eagerly awaited what was to come. And, as always, Ghost didn’t disappoint. Papa Nihil was wheeled out in a box, dormant and needing a defibrillator to shock the old boy to life, which through a barrage of sparks caused him to jump up and strangled the nurse responsible for his resuscitation. He then ripped his saxophone passage, nearly falling off the stage, before being carted back off to be packed away and shipped off to Laval for tomorrow’s show.

Like Alice Cooper, King Diamond and Mercyful Fate, the theatrics used by Ghost add so much more to the night than a band that just stands in front of the their Marshall stacks, nodding to the beat of their own drum. Of course, this is also an issue that some have with the band – branding them anything other than the metal band they are, because they fuse an element of fun into what they do. After seeing Ghost a half dozen times, I can honestly saw that I am already looking forward to the next dozen shows.

With our socks thoroughly rocked off, our taints tickled the night came to an end – with one final number. Papa Emeritus strolled back to the microphone, playfully annoyed that people hadn’t exited the building yet, and made a deal with them. “We’ll play one more song for if you promise to love each other. If you have someone special, you go home and fuck them – and if you don’t, go fuck yourselves – and I’ll go fuck myself.” How can you help but love this group? Then came the hit Square Hammer, perfectly played, and the night was at its climax all too soon.

One thing is certain – Ghost put on one hell of a great spectacle. Always highly energetic, with great theatrics and an incredible atmosphere. It’s about time Ghost considered recording some of these shows to release as a blu ray – I’d buy it without question.