On an evening where torrential rainfall nearly brought the city of Montreal to a standstill, especially its public transit system that saw multiple metro stations flooded to the point where service had to be interrupted, In Flames still found themselves playing to a full house. The Corona Theatre was packed to the brim by the time Fit For An Autopsy took to the stage – but for Vended and Orbit Culture, that wasn’t the case.

Surely the poor weather was a contributing factor, alongside the shows rather early start time of 6:30pm and the usual Montreal approach to everything – show up at some point, on s’en callise.

As more and more pissed off and heavily soaked people entered the building, the waterworks outside were soon forgotten. On this night, the stage would be visited by four solid bands from Sweden and the United States, and all of them were ready to rock. 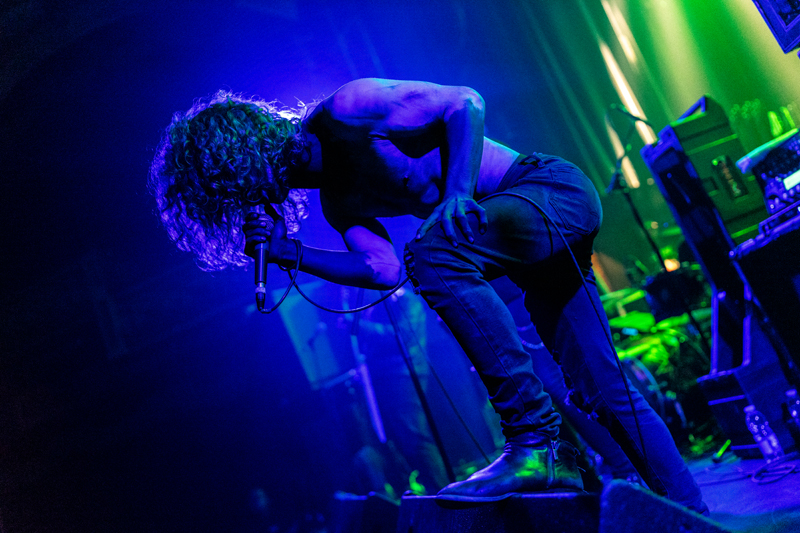 Starting the night off, were Vended, a young group out of Des Moines, Iowa – who seemingly have an aversion to stage lighting; and an obsession with another band from Des Moines whom they try hard to impersonate. Perched on the tiny strip of stage that remains once all the stage monitors and other bands gear was set-up, made it hard for Vended who seemed like a band that likes to get quite active on stage – as they bumped into one another several times. Seriously, they were only gifted the tiniest platform on which to perform.

Vended not only look like Slipknot, down to the masks, and the mannerisms of vocalist Griffin Taylor and the mask wearing bassist, Jeremiah Pugh. Lyrically, sonically and even the stage banter of Taylor felt as if taken straight from a Slipknot performance. The singer even shares the same last name as the Slipknot frontman. Despite it all, however, Vended spent their half-hour set pumping up the audience as they slowly sauntered in, soaked from the rain and the flooding that was going down outside. 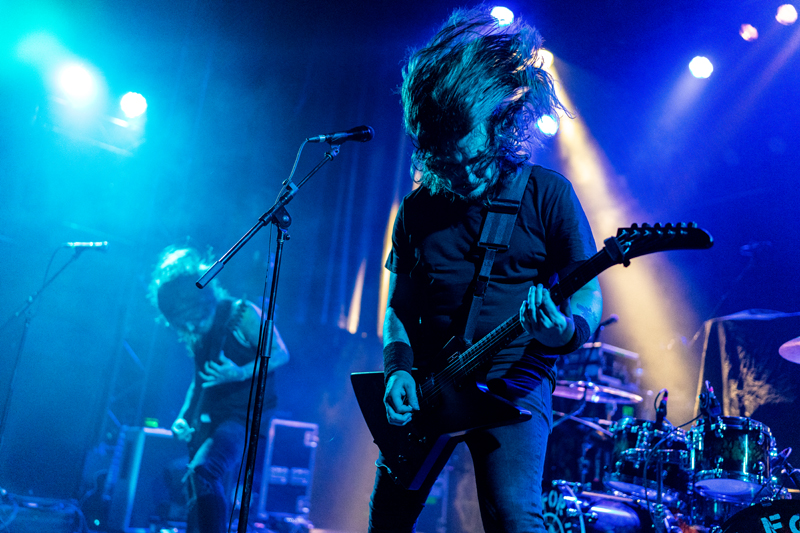 Following up Vended, was the first of two Swedish bands on the night – Orbit Culture. A melodic death metal band that like modern day In Flames, fuses metalcore elements into their sound. Like Vended, Orbit Culture is a fairly young band with a bright future ahead of them. One that has seen its fair share of roster changes as members left to pursue their university studies. Despite their youth, these Swedes have been composing solid song structures for several years now and have earned their place on a tour such as this.

With limited time, Orbit Collapse were able to get their point across – playing music that fuses elements found in both Fit For An Autopsy and In Flames. Their melodic moments hint at a Gothenburg scene influence while the breakdowns show an interest in metalcore and deathcore. The result is a hybrid of multiple genres that is both well crafted and shows strong compositional skills. There is a strong groove to their music, somewhat akin to what In Flames have done in the latter part of their discography – and they do it well. This is a band to watch out for in the future.

Fit For An Autopsy 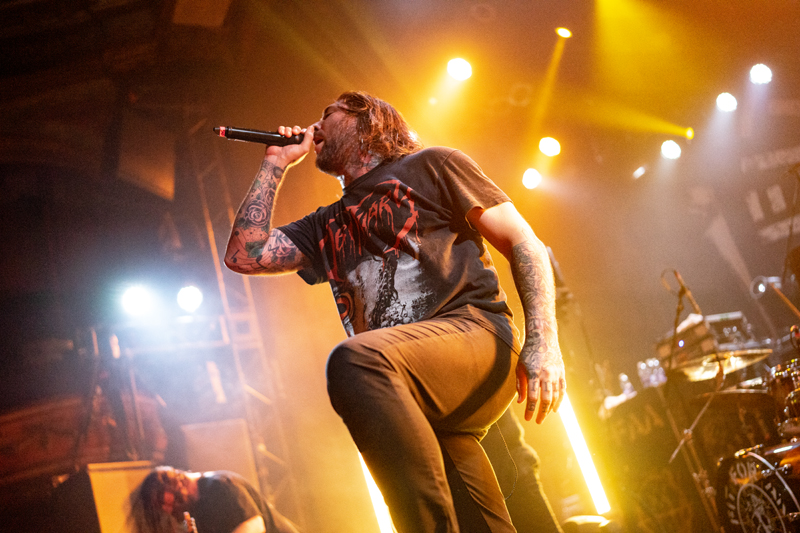 Deathcore titans Fit For An Autopsy were next up, and things were about to get nasty. With breakdowns to shatter any element found on earth, Fit For An Autopsy exploded into a ferocious set of violent yet melodic tunes that flew by. There is so much to love about these guys, especially if you like your music filled with groove, riffs that hit like a slap in the face from Godzilla yet without forgetting about the melody and tempo changes that truly bring a great deal of variety to the music.

Touring for their new record, Oh What The Future Holds, that dropped earlier this year, and playing several tracks off that incredible album such as A Higher Level Of Hate, Pandora, Two Towers and the album’s title track Oh What The Future Holds. In fact, five the nine tracks Fir For An Autopsy would perform came from their new album. It would seem that Fit For An Autopsy have learned a lot about composition from the mighty Gojira, and have began treading a similar path to them. I’m all for it. I would go as far as to say that on their sixth full-length, Fit For An Autopsy have found their maturity and have come of age as a band – and that has a lot to do with the more varied song structures that are now part of their sound.

I don’t believe in regrets – but if I did, not leaving the venue with a copy of Fit For An Autopsy’s Oh What The Future Holds would have been right up there. Given the rain, and the fact I had planned to walk home to avoid the disaster that is the Montreal public transit system, made purchasing vinyl an impossibility.

As good as Fit For An Autopsy had been, the crowd was already chanting In Flames before the group walked out onto the stage. A sense of anticipation was filling the air about the Corona theatre. There has always been a large following of In Flames diehards in Montreal, and the sold out venue of this stormy night was further testament to that fact.

My journey with In Flames began back in high school, when an employee of the sorely missed record store Rock En Stock suggested I pick up a copy of their Subterranean EP. At the time, that was their newest release and it instantly became a favorite of mine. Shortly after that, the band release The Jester Race, an album that I still consider to be In Flames at their utmost best and the jewel of the Gothenburg scene. Twenty six years later, to be hearing songs from those two releases was an incredibly experience. Albeit not the first time I have been lucky enough to hear them – however, I had thought the days where In Flames would play those benchmark tunes was long past.

In fact, In Flames would play a song from each of their records leading all the way up to their most current, 2019’s I, The Mask. Vocalist Anders Fridén teased that a new album was coming out early next year and that it would be a return to old ways, but there were no new songs played. Hearing Behind Space, Moonshield and Jester’s Dance was without doubt the highlight for me, but hearing tracks such as The Hive,  Scorn, State Of Slow Decay and Mirror’s Truth was phenomenal as well.

During The End, Fridén stopped singing and stood with mouth agape, with a giant ear-to-ear smile listening to the crowd singing his lyrics back at him. I could only imagine how amazing of a feeling that must be. The Corona theatre was truly alive on this night, as In Flames plowed through a virtual best of the best of their recordings. Having seen the band many times over the years, I can say in earnest that this was one of the better performances I had witnessed. (Although the best would probably be back in 1999 when they played Le Medley – a long defunct venue that is now yet more fucking condos.)

The night came to a conclusion with My Sweet Shadow off of the Soundtrack To Your Escape record, and try as they might with a rowdy chanting of the bands name, In Flames were off to unwind backstage. Despite all the line-up changes over the years, they are still a tight unit, playing flawless renditions of their most adored tracks. There’s some respect due for that alone.

Sat there, listening to In Flames playing through their entire career one album at a time, albeit in small samples, I realized how much of their music I knew and noticed how much change there has been over the years. From Whoracle on, the death metal element was practically dormant yet there was also something to love about them. I normally am not a fan of artists that drastically change their music style as they grown more and more popular – but I have a soft spot for In Flames, because of the genius of The Jester Race.

Treading back out into the wet night, I felt a sense of exhilaration about me. A happiness that only heavy music can grant. That whole spiel people cast on metal fans, about it being angry music for angry people couldn’t be more wrong. Metal makes us all happy. No sad. Not angry. Not violent. Happy. Even as the water squelched between my sodden toes, that feeling wasn’t about to subside any time soon.