I once saw a video clip that showed UFO’s flying about. Causing havoc and the like. If memory serves me correctly, it was shot from by an aeroplane pilot. And this pilot could be heard saying “No doubt about it, this is weird”. Or something along those lines. These words are the first words that came into my head once I found myself paying full attention to the sounds on Gridfailure‘s new release. Fully submersed. Everything else I had going on was on hiatus. I sat with my ears turned towards the speakers. 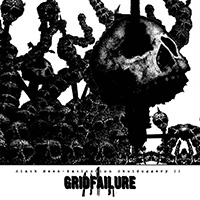 And there is no doubt about it. This is weird. In a fantastically mesmerizing sort of way. I am no stranger to dark ambient, and power electronics. Circuit bending or even harsh noise. I have been into experimental music for almost as long as I have been into music itself. As David McWane from Big D And The Kids Table puts it – we are lovers of the sound. This has nothing else to do in any way with Big D other than that.

This most certainly isn’t for everyone. Thus, if you’re not into soundscapes that will stretch what you consider music. Or are unwilling to challenge your musical ear. Perhaps this is where the bus stops for you. And that’s fine. I’m on this ride for the long-haul though. All aboard!

Sounds that are this experimental, are extremely hard to pigeonhole into a fixed category. I sat here for a time wondering how to explain what I am hearing; until I decided not to. What I can tell you, is that this work is a collaboration of many parts. A gear in the machine. It was created over four years, and as such, contains segments that vary greatly from one another. Parts are noise. Harsh and cold – difficult to listen to. Others are more drone-like. More in a shoegaze and dark ambient vain. Then there are segments played on guitars. It ends as abruptly as it began, and is an experience in itself.

I really like the variety that “Sixth Mass-Extinction Skulduggery II” offers. Its sense of apocalypse in a time of apocalypse. It has an overall feeling of despair and destruction – which I suppose is the point. At the same time, the shoegaze aesthetic that pulls you away into a dreamlike state is audacious. Quite simply the main aspect that attracted me to this and similar styled music in the first place. Sometimes I want to sit and drift off into my sub-conscious. Lose myself in my thoughts. And this genre has always been my go to for that sort of thing. I suppose that would explain a lot.

I suppose this sort of soundscape would appeal to people for various reasons. To me, it is a standout release – but that would most certainly pertain to what the listener is looking for. For example, this isn’t any real way to discuss song structure or timing here. It is sound bred in chaos, for the purpose of destroying sound waves. To others, this sort of thing would be nothing more than noise. I know this through experience.  To each their own and all that bollocks.

Strangely enough – there is no grindcore on this Gridfailure release. (Update : I initially referred to this release as Grindfailure, when the artist is, in fact, called Gridfailure. Which is why there is no grind on the grid. The situation is under control. All evidence has been covered up. There’s nothing to see here! Move along!)

According to the press release that accompanied this collection of sounds, there were many guest musicians involved. Or collaborators as the release so eloquently puts it – including musicians who’ve played with likes of David Bowie and Miles Davis. Say what! My mind; blown. Shattered. I wish it mentioned these musicians by name, because my curious nature is peeking off the richter scale right about now. I must know more. (Update : Mac Gollehon played with David Bowie and Miles Davis, as well as Madonna and Blondie and more)

Gridfailure’s second album,”Sixth Mass-Extinction Skulduggery II”, is available for pre-order from Nefarious Industries. Digital copies for now, with physical copies to come later on. Probably as a result of the COVID-19 pandemic.

For Fans Of : Raison D’Etre, Man Is The Bastard, Ames Sanglante

The second round of the 2020 Formula One circuit remains in Austria, although the event will officially be known as the grand prix of Styria. Same location, different name. Which…

Controversy in Austria as Bottas takes the checkered flag

Formula One returns as Mercedes dominate Qualifying in Austria