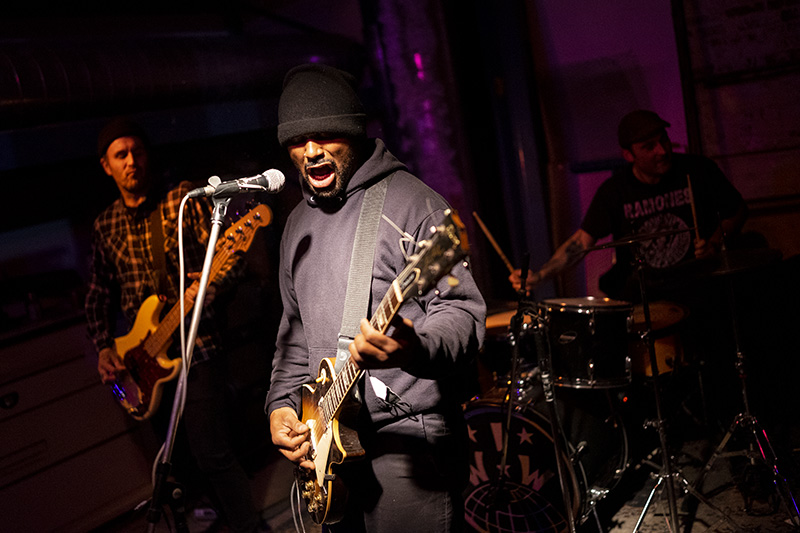 In Montreal’s south-west district of Point Saint-Charles, is a place known as Batiment 7. Here, there is a very good brewery named Les Sans Taverne, and a true community of misfits – my people, that stand against the mainstream, against the woes of modern capitalist society. Some would call them punks or gypsies, hippies, what have you – I call them kin, and have a deep respect for them and what they have achieved and done for my community. See, the people of Batiment 7 have been successfully fighting and beating gentrification in our neighborhood for as long as they’ve been around, and that is something worth standing for. Hell, they even won a battle against condo developers and instead gained the right to build a public park where said condos were scheduled to be built.

Now, there is a new venue that has emerged in the Batiment 7 building, known as Co-op Recyborg, and on this night – a punk show was to be played, featuring the Hood Rats, whom were about to play live for the first time since this pandemic thing arrived. And honestly, it was about fucking time. Alongside them and also scheduled to play where Total Waste, Claude L’Anthrope, Mycelium and Cadmium. But wait – there’s more! Also on display , was a play piercing display, where those in attendance could pledge a dollar towards sticking a needle into a human pincushion, named Nikos The Robot. Naturally, with a thousand needle limit – of course.

There was  a super good DJ named Engine69 spinning some awesome tunes – anything from techno to reggae and anything imaginable in-between, and the vibe was immense. This was as good of a time as you could have, without a cover charge, or a door man or any of that shit. It was a bring your own beer, have a good time and just be respectful of each sort of a gig. The epitomy of true punk. DIY to the bones, and cool as all fucking hell. All ages, all walks of life, of sexual preference – whatever, all in the same room and having a wonderful fucking time. This, this is punk rock. There were children and elder folk, animals and crusty punks, if you can imagine it – it was here, on this night, and having a great time. Gazing over this gathering, I felt proud – this was what my generation fought for, and here it is. Fuck yes!

Of course, like an asshole, I arrived late – and walked into something that resembled an illegal rave on a Mad Max movie set – that is to say, it was flippin’ gorgeous. Despite the fact that I immediately felt old and almost out of place, I also had a sense of pride, like a passing of the touch to the next generation of degenerate punks that will keep all the things I love in life alive for at least a few more years. I must have been twice as old as anybody else in the room, and despite all the many, many years I’ve spent in this scene, finally felt a little out of place. I had no reason to feel this way, but I still did. I just hoped none of the wonderful people here looked my way and thought, “is that a fucking NARC!?“.

The last time I saw the Hood Rats was pre-pandemic times, when they opened up for the legendary D.O.A – and at that time, Tony Salador was singing from the drum throne. Now though, Salador is on the guitar, singing the way he needs to be – the way he is known to, and the Hood Rats are far better off as a result. Instead, Guillaume Tremblay now plays drums in the band, with Andy McAdam on bass – fun fact, both Salador and Tremblay played in UK Oi legends The Blood while they toured North America last, so you just know the chemistry is there.

Included in their setlist, were the four new tracks off of their brand new EP, 2022 Demo Tracks – which as the name implies, is a demonstrational recording that will serve as a stop-gap until their new full-length album drops. Most of their material came from their 2019 record, 40 oz. Of Fury, and to my knowledge, this was the first time they had played these songs live, with this line-up and with Salador on guitar. The crowd’s reaction was massive, with dancing and moshing – and without an actual stage, that meant that the action sometimes spilled into the Hood Rats – who didn’t seem to care.

And then a dog walked onto the stage…

There were other artists that played before the Hood Rats, but to be honest, I was outside drinking with old faces I hadn’t seen in a while and soaking in the ambiance of the place – a truly unique crowd of people.  I was here to see the Hood Rats and didn’t expect to have half as good of a time as I did. I danced to old reggae jams that the DJ spun, and strange mash-ups of cool tracks by artists like Aloe Black. It was a hell of a lot of fun. There was my old ass, shaking it with crust punks and dogs and everyone else, to awesome old school jams, and all of us having a great time. I seriously hope that this sort of thing continues to happen, and so close to my home too – bliss!

I saw the tail-end of Claude L’Anthrope, who was solo on stage, rocking out on a keytar and laying down some fun post-punk, new wave sort of jams. Kraftwerk-style synth-pop, and the gathering of people ate it up. I was saddened to have missed it, but that’s on me and choosing to stay home watching some terrible skateboard movie starring Ryan Dunn that popped up randomly on Youtube. I missed practically all of Total Waste’s set, because I was off trying to make it to the depanneur before it closed – and failed. Rats!

This was, without a doubt, the most punk show I have seen since the glory days of the Death House at the notorious Fattal lofts in St. Henri. That is to say, many moons ago. Those that know, know. With flyers for shows that gave directions as “ask a punk”, because the Death House was an illegal venue with the best, most viscous and strong cider in the province – I shit you not. It was made in a secret, nearby location and is probably still better than most the big brewery made cider this province produces. But that’s neither here nor there. Here were a gathering of people from all walks of life, with as varied of a night of entertainment you could hope for, all vibing together, at peace and in harmony with one another. Dance if you want, or don’t – perch yourself on the industrial scaffolding above – or don’t. Do whatever you wish, so long as you’re respectful of those around you and cause no harm. This is how things should be.

This was the opening night for Co-op Recyborg, and I genuinely hope these type of events continue. Of course, with the gentrifying condo owners perched just across the street, there will probably be some form of resistance or complaints to be heard from such creatures. Hopefully they realized that despite their little luxury hellhole condos, this is still The Point, and that they respect the lower-class hood they’ve chosen to bring their Audi’s and Mercedes into. Somehow though, I have my doubts.

And then the cops showed up…