Metal titans Lamb Of God have a new album about to drop, named Omens, and it’s yet another banger. 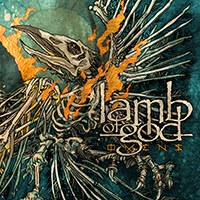 I don’t know if there is a bigger metal band that Lamb Of God in action today (maybe Slipknot? Ghost?), so when a new album hits the airwaves, you can bet that the realm of extreme music pays attention. With their most recent record, 202’s self-titled album, releasing just in time for the planet to shut down and go to hell, Lamb Of God didn’t have the chance to tour as they normally would. Instead, they went back to the drawing board and wrote a new album, because idle hands are the devils playthings or some such shit.

The result is, simply put, as we have come to expect. Straight forward, no nonsense, heavy as balls metal. Filled with saucy riffs and and giant grooves, pissed off vocals from the one and only Randal Blythe and all the key elements that put the band of the map all those years ago, and have kept them there ever since. While you might find any shocks or surprises here, you will certainly get what you came for – your socks thoroughly knocked off and a perforated eardrum or two. What more could you want from a Lamb Of God record?

I still get quite a kick out of the fact that Blythe is way more into punk than he is metal, yet constantly blurts out some of the most harsh vocals on the planet. For the few that don’t yet know, Blythe has a radio show on Gimme Radio where he kicks out his favorite jams and talks about the bands he loves – all of them punk of 80s hardcore bands. To listen to Lamb Of God though, you’d never get that impression. On Omens, Blythe and crew have a track that could well be off of an 80s punk record – and the funniest part, is that the only element that remains metal, are Blythe’s vocals. Still, Denial Mechanism is undeniably influenced by punk and hardcore, and is a brilliant track.

Besides Denial Mechanism, the rest of Omen is pretty much formulaic. I suppose, when you have the best recipe, there’s no need to spice up the ingredients. While that might sound like a slanderous comment – or that I am accusing Lamb Of God of continuously putting out the same album – for the record; I am not. Omens very closely follows the sound and strong song structure that previous albums have, sure, but as has been the case with each record, it is a progression of that tried and tested formula.

Lyrically, Blythe is probably on a new level, personally, for politically charged scathing dissent. The man is rightfully pissed at what he sees about the world, and the venom he spits is showing his disgust more and more and more as time goes on. This possibly could again be attributed to his adoration of the punk genre – then again, anybody with half a brain and a set of eyes can see that things are swirling faster and faster down the shitter with each passing day. Omens focuses largely on the ills of the world; primarily in America, where things have been spiraling out of control for some time now.

You know what you’re getting when you buy a Lamb Of God record. A slamming set of tunes, heavy on the groove, with searing vocals, top notch production and violent guitar riffs. Record after record, guitarists Mark Morton and Willie Adler find fresh new riffs to slaughter ears with, with drummer Art Cruz – now on his second full-length with the group, going ape on his kit, knocking out triplets and blast beats galore, fans can rest assured that Lamb Of God are indeed firing on all cylinders.

Unsurprisingly, Omens is a solid follow up to 202’s self-titled release, and another great slab in an already faultless discography. As I said, there isn’t anything new here, but the band continue to be purveyors of what they do best, and that alone makes Omens a worthy addition to any extreme music collection. Sometimes standing pat is as good as adventuring into the unknown – which, if you’ve heard the newest Slipknot record can attest to, doesn’t always appease fans anyway. Sometimes the devil you know is the one to stand by.

Copies of Omens are available on vinyl, compact disc and digitally from the bands website.

For Fans Of: Pantera, Gojira, Slipknot