Amidst further tightened curfews and continued presence of pandemic restrictions – restaurants, bars, clubs, music venues and live music remain a faux pas. Family diners are still illegal, as are gyms and after meal strolls in the park. Government regulated drug and alcohol consumption is still permitted – for now. In short, we are in a world of shit. Deep, pungent dung. Concerts or gigs or – whatever you wish to call them, also remain forbidden fruit. The best we can get, is a live streaming event such as this – unless, of course, you live in Ontario.

Quebec City’s Sandveiss tonight played to an empty room. Normally, that would be a depressing thought for a band but not tonight. Tonight – that empty room broadcast its contents across the internet – out across the entire planet. Worldwide and personified. Titled Sabotaged Live!, Sandveiss are set to play their entire Saboteur album, umm, live. Pretty obvious from the show title when you think about it.

Sandveiss are something of an extension, a continuation of the great Black Sabbath – and if that is your jam, especially the more blues-infusion albums, then this is something to investigate. The guys probably won’t be happy at being considered a continuation of another band, but we’re not talking about any band here. Sabbath are more influential then any other band in the metal realm – there wouldn’t be a metal world if not for Sabbath.

This could easily be released as a stand alone DVD or as a secondary disc on their next release. The quality, both sonically and visually is superb. The camera work is fantastic – switching back and forth between the members – even showing us the drummer. You don’t get that in a live setting! Those guys are always hidden in the back, surround by hi-hats and snares, crashes, splashes and swish and china’s. Somebody is dashing about the stage filming all the action – and the lighting is perfect. Maybe not for a photographer – but in this scenario, my cameras sit gathering dust on a shelf, awaiting the end of the great plague.

Although I question how live this truly is – because it sure felt like a live broadcast of a previously recorded show, the way the lights change behind the band, the in-between song graphics that announce the song name and the lack of between song stage banter. But I don’t care. It was great regardless, because Sandveiss gave me back a sense of what my life was like, in the before times – before the pandemic, and for that, I am eternally grateful. 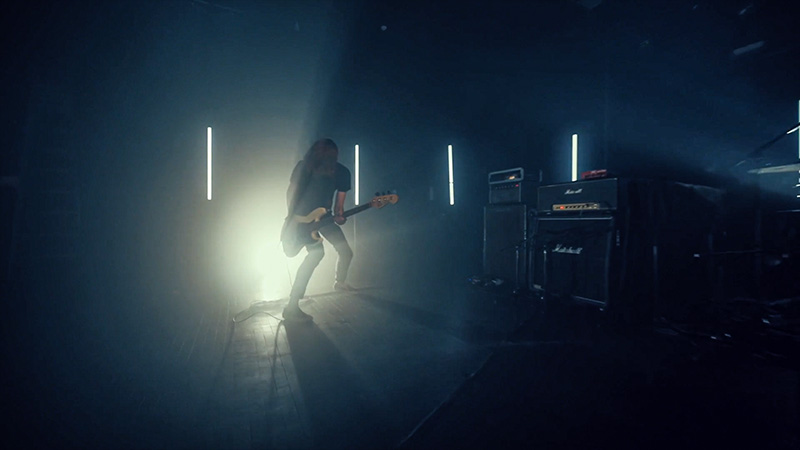 On Burning Ropes, the boys count down to the song, un – deux – trois – quatre, then appear on a different stage, with a stripped down drum set, and a wardrobe change. Different instruments all around – including a lute. I think that’s a lute? A tiny guitar, in any case. A-ha! Even the lighting is different, and just a few seconds after the previous tracks climax, too. These guys are either Superman fast, or this is a pre-recording.

At the conclusion of the set, unlike when seeing a band in a venue, we had end credits scrolling across the screen, and there, in black and white, my suspicion was confirmed. Filmed at La Charpente des Fauves in Quebec City, it said, in February of 2021. Live-ish. Still highly enjoyable, and the band has given those that bought tickets the ability to re-watch the stream for the next week. I fully intend to take them up on that offer, too.

All things considered, it was great to hear live music again. Although the feeling of being shoulder to shoulder in a packed room full of friends and strangers, all gathered for the same reason can’t ever be beat. Well, this was still something at least. On the plus side, the beer was far cheaper, having been pre-purchased and chilled in my own fridge – and the taxi fare home was zilch. The line-up for the bathroom’s minimal and there was no enforced coat check, either.

Sat on my couch, with a cold beer or twelve in hand, watching Sandveiss on a 65″ television that runs through a stereo surround system is pretty cool… but what I wouldn’t give to pay exorbitant prices for a cold brew and for a ride home on a night bus, newly purchased records under my arm, filled with the cities most piss-stained degenerates. How we miss the small things in life once they’re taken away from us.