Say what you will about the resurgence of Traditional Heavy Metal, but I for one couldn’t be more welcoming of the style. 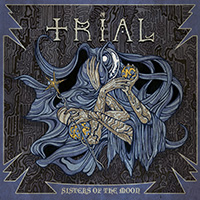 So much of the original material that we now call Traditional Heavy Metal suffered from poor production or became insufferably difficult to obtain, due to age and low pressing numbers. Yet, through digital mediums and re-issues, those gems are slowly being unearthed once more. As that happens, more and more, musicians are forming bands to pay homage to the vibrations of yesterday and to continue the progression of the genre. By now, all should know that Metal is far from being a flash in the pan, and this trend will strive forward for years to come – thankfully.

Sweden’s Trial, who are not to be confused with other bands sharing the same moniker, have been honing their craft for just over a decade now, and have been silent for roughly four years, but are finally on the brink of releasing new material. Well, maybe the term new shouldn’t be accentuated here. The two tracks on this fresh EP are both cover tracks after all. Regardless, a follow-up to 2017’s Motherless album was long overdue. Maybe the stars will align, and a new full-length record will find its way to us at some point this year.

Beginning with Sisters Of The Moon, which is a blistering rendition of a Fleetwood Mac deep cut, and something that isn’t immediately recognizable as a cover track until the chorus riffing kicks in. Once it does, it becomes obvious that Trial have concocted a fantastic rendition of the song. The original version starts off at a slow tempo and works its way into the pop rock wizardry Fleetwood Mac are known for. Trial, on the other hand, have revamped the track into a NWOBHM styled heavy rockin’ jam. The guitars sore with solid grooves that are certain to sear their way into memory.

Unlike the Sisters Of The Moon, Trial’s cover of the Black Sabbath classic, Die Young, is instantly recognizable. The track, originally released in 1980, on the phenomenal Heaven And Hell record – is among the first to feature the legendary Ronnie James Dio at the Sabbath helm. Trial do this classic cut justice here. More of a straightforward approach this time, as opposed to the Mac track. No thrills, bells or whistles. This is an homage to one of the greats. Pure and simple.

A very limited print run of this fantastic new EP from Trial are available from Metal Blade. Act fast, because this will soon be gone like the sands of time. Just 333 copies have been pressed.