My first encounter with Cirith Ungol came while helping a friend move. He was my upstairs neighbor at the time, and had a box of records that he deemed too heavy and not worth moving. Thus, they fell to me. Yes, there was a time when vinyl records weren’t even worth lugging to a moving truck. Imagine that. In that box of treasures, sat Cirith Ungol’s 1984 masterpiece “King Of The Dead.”

This must have been towards the late 90s, as I was just months out of high school at the time. That box introduced me to many great bands that I maybe wouldn’t have known otherwise. Thinking back, I owe much to that day. Like I do the old record shops I’d haunt, digging through albums that were by majority a mystery to me. Buying those with the coolest album covers. Before the days of Youtube and streaming services. I yearn for those days still. 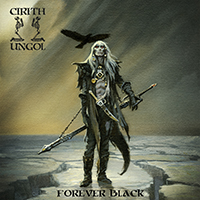 I still toss that piece of wax onto my turntable from time to time, and up until I received a promotional copy of “Forever Black” – had no idea the band was still around. Sometimes it feels like Punk and Metal bands never die. That is by no means a complaint. Sometimes newer works from an older band are shallow representations of what once was. But as is the case here, sometimes the newer releases are just as potent as they ever were.

“Forever Black” feels as if they never left. Despite being without their founding guitarist, Jerry Fogle, whom passed away from liver failure in 1998 while the group lay dormant. His demise hasn’t altered the sound of the band, though. Which I suppose is a positive. In fact, “Forever Black” could have followed “Paradise Lost” just months after its release and still felt as good.

Each time I have listened to this album, it has grown on me more. The thunderous and infectious chorus of “The Fire Divine” sticks in my head every time. I find myself pumping my fist and singing along to it more and more. Then again, I have a deep love and admiration for traditional heavy metal  – especially the NWOBHM movement. This was always going to be something that would suit me well.

Often, it is the vocals of a band that really struggle over time – yet Tim Baker’s snarl remains intact. Forever black. If anything, they might be slightly more gruff now.  I honestly feel that this new record will be welcomed by anybody that was ever into Cirith Ungol. Or into traditional heavy metal as it happens. This isn’t treading new ground – nor is it re-inventing the genre in any way. It probably won’t convert new ears, but it will appease those that are already among the few, the proud, the denim clad. Join the legion!