Philadelphia’s Fire In The Radio are back with a follow-up to their acclaimed album, “New Air”. This is their third effort, and my first experience with the group. While I know there are too many bands to remain up to date on everything. I am annoyed that these lads flew under my radar for so long. 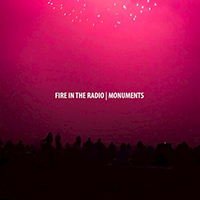 I’m torn on how to explain this record. At times I’m confident that calling it New Wave works. And at others, not so much. Then, I feel I should peg it as Post Punk – but that feels wrong too. There are defiantly elements of both genres, though. And when you consider that both genres stem from the same source – it all makes sense.

An argument for Indie rock or even Shoegaze could be made, I suppose.

Fire In The Radio have a duo of singers, which adds an interesting element. Not really a contrast, as the two seem on the same page. At times, the vocals remind me of The Cure. At others Jawbreaker, especially in the quieter moments. In fact, the two aforementioned groups can be felt throughout Monuments. Yet somehow, I wouldn’t say Fire In The Radio sound like either artist. Weird, right? I know. But it is what it is.

It would be easy to say that Monuments belongs in the 80s. Or at least sound like an 80s revival band. I would argue that they sound too mature for that. Too polished. And that is a good thing. Despite this current trend of rehashing the errors of a bygone era. And yes, I mean the clothing and fashion sense, primarily. People dressing like Tin Tin and the like. Grandma’s pants. That sort of thing. It would be easy – and unjust.

At times, I feel a Joy Division moment. Albeit far quicker in pace. Fire In The Radio seem to wear their heroes on their sleeves. However, what they’ve collectively created here on Monuments is far more than a tribute album. Or a rehashing of old ideas. Perhaps calling it a continuation – or evolution, is just.

The album opens on the back of one its strongest tracks – “Let’s Get To The Start”. Aptly named. It sets the tone for the rest of the album, and alludes to what is to come. Other standout songs include “I said” and “This Is My Document”. Two of the more upbeat tracks, as it happens. Not that the record really sways on tempo. It’s pretty stable on that front. So is its flow. Listening from to finish feels natural.

Below is the official video clip for “Ex-SF”. Check it out.

The final track on the record, “Save Me”, is possibly my favorite. There are several solid songs here, though, so that statement might not be true next week. It has a great vocal performance that interacts perfectly with the guitars. Almost solemn but not quite. In fact, that sentiment could be carried over the whole work. Yes, I would say Monuments is bleak at times but always with a ray of sunshine. A sense of hope.

Fire In The Radio may have inadvertently written the soundtrack to this global pandemic. Times are bleak, but we still have hope.

For Fans Of : The Cure, Jawbreaker, Tears For Fears