Let me preface this review by saying that Bruce Dickinson’s voice has not sounded this good since arguably Iron Maiden’s 1988’s Seventh Son Of A Sevenths Son. 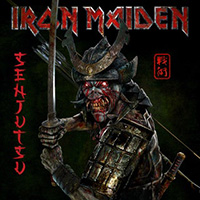 This is the cleanest Dickinson has sounded—for the first time in a long while his pipes don’t seem to be forcing or over-pushed, but rather are wide open on even the ranges he was able to hit with great ease in his twenties and thirties. His oncology team truly did deserve that credit in the acknowledgements section. That said, this is perhaps the worst capture of this man’s magic. I’m not sure if it was Steve Harris’ (he co-produced this album as he has since Martin Birch retired) or producer Kevin “Caveman” Shirley’s doing, but Dickinson’s voice is lost in the mix and final mastering in easily ninety percent of this album; and that’s a shame because his singing, annunciation, and vocal range are truly the highlight of this record.

In the three-part documentary of the making of this album, Harris and Dickinson openly discussed their career-long disagreements over melody vs vocal harmony and phrasing. While Steve has always adamantly argued that the melody should preside over the vocal lines because “…80% of our audience doesn’t even speak English”. He (especially on his compositions) tends to tell Dickinson to tone down his phrasing and harmony. Dickinson on the other hand believes that vocals should preside over everything as they are the essence of the song; his words tell the story and set the mood for the melody and therefore should be the base and focal point of melody. Whomever you agree with (maybe a bit of both), there is no clear winner on this album because it seems they both got their way. Dickinson’s harmony and phrasing are stellar—but completely lost behind the music for most of this album. Like an overtime win in a gold medal game—it’s a shitty way to claim any victory. So let’s not.

This album was tracked live and recorded in six glorious weeks in France and has been ready since 2019—but delayed due to the pandemic. The guys went into the studio only having written a few ideas and basically “winged it” from there. That they came up with over an hour and half of music on what is their first ever double-Compact Disc studio album in a career spanning five decades is either complete madness—or the result of six very bored men in their mid-sixties trapped with nothing to do and nowhere to go during a world-wide shutdown of every-fucking-thing.

Senjutsu is Maiden’s seventeenth studio album and it is a solid outing. If it’s better than its predecessor, 2015’s The Book Of Souls as the guys claimed is a matter of opinion. (I’ll leave mine until the end). It is not a concept album, but what it is, is quite thematic; War, Freedom, Honor, Justice, Faith, (Anti)political… It is a very atmospheric album, one that I think will translate much better in a massively loud arena than in your living room or car’s sound system. I think part of the problem with the over-all sound of this album (as in a few of its predecessors) is the way Shirley captures the band (or in the way he’s asked to by Harris?).  For lack of any other way to put this: it is very heavy on the bass-end of the spectrum– something I normally like– but in this instance all Shirley seems to achieve is making the album sound muddled and lacking in definition. Picture someone speaking with their mouth full or with their hand in front of their face; you can make it out but you really wish they’d swallow before speaking.  Some of Steve’s intricate work is lost in the mix and the busier  parts especially, sound jumbled. In Birch’s mixes, no matter where in the song, no matter how fast or busy Harris’ parts were, you could literally hear every string being plucked and bouncing of the fret board.  I haven’t heard that in years– at least not consistently– with anything Shirley has done for this band.  In albums past, the string instruments blended beautifully together, were full of body and great tone and it just seems (to me) that Shirley is not capturing this magic anymore. McBrain’s drums track well for the most part on this record (more on that later) but definition in the whole of this album is lost with way too much bottom end– which in turn also drowns out much of Bruce’s vocals.

The guys mentioned that Maiden fans may be shocked at “two or three of the songs” as they did not sound like Maiden at all; “Aye? This is not Iron Maiden!” as Dickinson joked. Honestly though, but maybe for the folk-inspired intro to the single we were introduced to last month with that stellar video to The Writing on the Wall, and maybe to a certain degree, the first two minutes of Lost In A Lost World this is unmistakably Iron Maiden. Maybe I’ve just grown very used to their direction over the years, but really there are no surprises here.

The epics that “are sure to please the long-time Maiden fans…” are long. Yup. Disc One has six songs; only two are under five minutes. The other four range between six minutes nineteen seconds and just shy of ten minutes. Disc Two contains four songs; the shortest clocking in at seven minutes twenty seconds, the other three all over ten minutes long; the longest being,  The Parchment at twelve minutes thirty-eight seconds. Every epic has its great moments—some moments longer than others—but there are (in my opinion) no Epics (capital “E”) here. There are some truly fascinating sections and breaks in every single song, trust me. However, you’ll not find the Ancient Mariner, Alexander the Great, a Seventh Son, or any Empires in any clouds here. The songs are just simply long, sometimes arguably even losing direction—like there was an idea about to develop but never materialized. They are good, please don’t get me wrong; I’m just keeping in-check those Maiden fans that tend to usually get overzealous when they hear the term “Maiden Epic”. These songs have incredible breaks and some very nifty bridges (the Celtic influenced bridge in Death Of The Celts is jaw-droopingly good), but for the most part you’ll be waiting for an apex that is quite anticlimactic.

Harris’ stamp on this album is enormous. If you listen well you’ll hear some of what is probably his most intricate and complex bass work ever recorded to date— and that is saying something if you know anything about this man’s brilliance on the instrument. Weird progressions, a ton of bass-chords, pleasantly odd arrangements peppered everywhere and masterfully executed as per usual. There is also a lot of keyboard on this record—so much so that Harris (I believe for the first time ever) is actually credited as playing bass and keyboards. Don’t worry though this isn’t Jump or The Final Countdown. You can breathe easy. The keys are mostly actually enhancing the whole atmospheric vibe of this record. There is also quite a lot more (audible) acoustic guitar (The Writing On The Wall and The Time Machine) and bass on this record—which I personally really loved. And yes, there are a few classic “gallops” on here too. No Maiden record is complete without it!

The three-guitar onslaught of Dave Murray, Adrian Smith and Janick Gers is as tight as usual; the three feed off each other very well and their shared solos and syncopated melodies are as always very well-orchestrated and fit the songs, by their own right. Musically though, from a purely guitarist’s perspective (the hell do I know I’m just a drummer!) I think this album as a whole lacked “that great riff song”— those two or three songs that from A-to-Z have a hook that pulls you in from start to finish. I just couldn’t find it here (yet). Of course I may have hastily jumped the gun in writing this review. I’ve only had the album for a day (but I’ve listened to it non-stop—going on round five as I write this). As has been the case in most Maiden albums since Fear Of The Dark, I’m sure this one too will grow on me more and more as I listen to it and discover other hidden subtleties… See and that’s the thing, The Book Of Souls was so powerful, there was no need to wait to discover any hidden subtleties. That album came out and punched Maiden fans in the face. It may actually be the only exception to that rule. It did NOT need a second listening to be put in my highest regard. To the guys’ defense, now in the twilight of their careers, when I think of the last few albums, form 2000 onward, The Book Of Souls will be a hard one to beat. I could be wrong… I love Dickinson but I’d have to respectfully disagree with him. Senjutsu as good as it is, is not the album to accomplish that task.

A word about the drums – of course! You didn’t really think a drummer would write a piece this long and not discuss the almighty drum did ya? Simply put, Shirley captures Nicko McBrain’s drums brilliantly and they do sound huge, as McBrain mentioned; my only quirk is I find Shirley always captures McBrain’s snare sounds a little too dry for my likening, but that’s personal.  I like a little live ring to a beefy snare sound. Also another peeve on this recording specifically: the bass drum is very “boomy”; powerful and deep but lacking in attack– adding to the overall muddy sound of the mix.  I also noticed an oddity—not in the playing, which was excellent—but in the equipment. Some time ago (about a year or so ago) McBrain appeared in the last few seconds, mysteriously out of nowhere, in a short Youtube ad for a new British company called BDC (British Drum Company), casing speculation amongst fans that he may be shifting his allegiances. Well he has. McBrain has always been a great supporter of anything made in England, and also owns his own drum shop “back ‘ome” where these kits are front and center of the storefront.

These drums do sound great and generally record beautifully, as evidenced by this album. That said, I did find it rather interesting that in McBrain’s personal acknowledgements, the custom drum manufacturer (and the team) was thanked alongside Paiste Cymbals and their chief extraordinaire, Kelly Paiste and her team (whom I personally know all too well are indeed freakishly talented at making some of the best sounding cymbals anywhere), yet in the section devoted to what Iron Maiden uses; the British Dum Company is thanked again, but this time, alongside McBrain’s last principal long-time (two-time) sponsor Sonor Drums. Interesting to say the least. McBrain’s playing is mature and rhythmically implacable on this album. It really is a very well thought-out performance by one of my all-time favorite drummers (and favorite rock drummer period. If you want to fight me on this, put yer dukes up!) The cymbals (oh my God that hi-hat!) literally cut through like a slap in the face. The crashes are like roaring thunder and his bell is the crispest I have ever heard it. Just truly wonderful. Dickinson said of McBrain on this album “He’s the MVP on this one”. I wouldn’t disagree… but don’t sell yourself short either Bruce.

Odd tidbit: tennis great Novak Djokovic is thanked on this one. Maybe Pat Cash (a long-time friend and fan of the band) influenced the Serb to put down the rackets and Up his Irons instead?

Now go listen for yourselves… Up the Irons! Senjutsu is available wherever good records are sold.