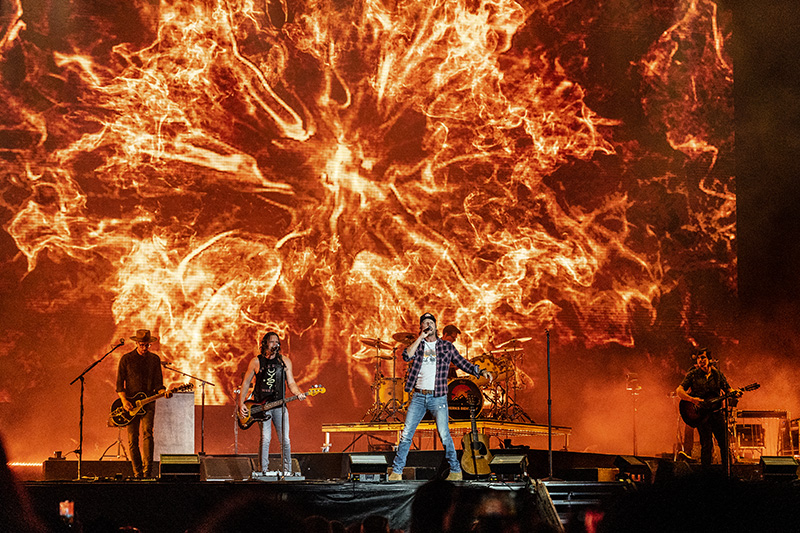 The first edition of Evenko’s new country music festival, Lasso, is officially in the history books.

Cowboy hats and daisy dukes where the order of the day, as Montreal turned country – at least for the weekend. Initially scheduled to take place some three years ago, Lasso – like much of our lives, was put on hold as the COVID-a9 pandemic swept across the globe and made a general nuisance of itself. Yet, in good ‘ol cowboy tradition, the festival would ride it out, weather the storm and the show would go on.

For two days, folks from all over would heed the serenade of bygone trucks and lovers who ran away with some summabitch or other, tales of lost dogs and wayward horses. Lasso brought in a surprisingly young crowd, many of whom were all too happy to drag a big ol’ cowboy hat on their heeds, pull on some knee-high cowboy boots and the shortest shorts imaginable, to get out and kick up some dust.

Lasso took place at the end of the three-week long festival circuit held on Montreal’s Parc Jean Drapeau, on Ile Ste-Helene where the Canadian F1 Grand Prix course, Circuit Gilles Villenueve, is located. A spot traditionally reserved for the ’77 punk festival and Heavy Montreal – a heavy metal festival, have been held. Although word hasn’t been given on the future of the two more boisterous festivals, Evenko does still use both the ’77 and Heavy Montreal tags to announce concerts to the region that fit those stylings. Perhaps, in the future, the city of Montreal will see a fourth consecutive weekend of festivities.

The festivals, including Ile Soniq and Osheaga, are largely kept within such a close timeframe because it they all use the same stage set-ups and locations – meaning that Evenko, in theory, saves money by only having to perform the massive tear-down operation at the conclusion of the festivals – which this year is delayed an extra week for the Rammstein concert that rolls into town next weekend. All of this takes place at the bewail of the residents of nearby Saint-Lambert – better known as at the party-pooper region of Montreal, who constantly make noise complaints despite being quite some distance away. No other area of the city shares these concerns, however.

The crowd was a little less animated than at the other festivals that can be found about the island. Not a single crowd surfer ventured up upon the broad shoulders of those rough and tumble folk, and do a mosh pit was to be found. There were no music lovers jumping about, none of that, although I did witness, on several occasions, a rogue square-dance break out amidst the dense crowd. Mayhem. No – it is safe to say that the ambiance at Lasso is a little different. Laid-back, if you like. And from what I could tell – sales of Coors might have been at an all-time high over these last two days. Yee-haw.

Musically, Lasso gathered up a swell collection of pop country artists – many of whom Canadians themselves, with a few American neighbors invited along for the hoedown, too.  With the likes of the great Dierks Bentley, Riley Green, Old Dominion and Ashley McBryde – country music fans were in for a treat. Also performing, Five Roses, The Reklaws, Tenille Townes, James Barker Band, Yesterday’s Ring, Matt Lang, Tim Hicks, Robyn Ottolini, Kelsea Ballerini and more.

However, I personally hope that for future events – and I assume that given the solid turn-out for this first edition of Lasso, that this will be the case, that Evenko looks into bringing some artists other than the pop country stars that came out this year. Some of the more traditional country musicians for example. Some of the outlaws, some bluegrass – and defiantly more banjo. There surely wasn’t anywhere near enough banjo to be found, and that is a crying shame.

Montreal Canadiens forward, Nick Suzuki, was on scene to announce the final performer of the inaugural Lasso festival – Luke Bryan – who Suzuki called “one of my favorite artists”. The Habs star then worked the crowd into a frenzy, goading them into a chanting of the ol’ Ole Ole song that the fans at the Bell Center singer when the Habs are firing on all cylinders – and despite a dismal last season, the populous were still more than happy to oblige.

Then another star took the stage – the final performer of the Lasso festival, Leesburg, Georgia’s native son – Luke Bryan. By this time, any doubts that Lasso wouldn’t be a success had been squashed, as the people in front the stage stood tight packed, shoulder to shoulder and all the way to the back of the outdoor grounds. The expensive seats up on the sides bursting and the hill at the back adorned with tired cowboys taking a moment to sit and watch from afar.

As was to be expected, Bryan jammed out all his hits, including Huntin’, Fishin’ And Lovin’ Every Day, What Makes You Country, Most People Are Good, Drink A Beer and of course Country Girl (Shake It For Me). Bryan had been great, even stopping mid-set to play some Canadian songs he struggled to remember, or play well, but hell, it was still an entertaining spectacle.