My phone buzzed; an email with promotional material for a soon to be unleashed Motorhead album, called Louder Than Noise… Live In Berlin, had come my way. It made my bloody day. 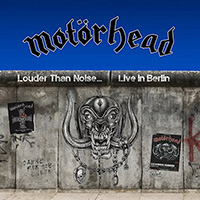 I don’t know about everyone else, but I’m still not over the passing of the late, great Ian “Lemmy” Kilmister. I don’t know that I ever will be. When he passed, I mourned him as if he were a close friend or family member – and in a way, he was. Lemmy was always there when I needed him. At least, his music was. Still is. It makes me sad to know that I’ll never ever again walk into a venue to get my ear drums slaughtered by Motorhead. I’ve probably seen them more than any other band on earth, yet it wasn’t enough. It’ll never be enough. At least there’s this, one last live recording to cherish. Unless there’s more locked up in the vaults – and if so, let’s ‘ave ’em!

Now, the way I see it is as follows; if you’re here reading this, you’re a Motorhead fan. By now, there are no longer any curious folk wondering what Motorhead are all about. It just isn’t feasible for that to be a possible scenario. So lets talk, Motorhead lover to Motorhead lover, shall we? What we have here, is a gift. Another chance to experience the mighty Motorhead, and that is truly a blessing.

Recorded on December 5th, 2012, at the Berlin Velodrom – Motorhead played one of their biggest-ever German gigs to twelve thousand delirious, delighted and demented fans during the Kings of The Road Tour. This was Motorhead at its peak, with their longest running line-up, that lasted until their final day. Thankfully, the whole night was captured by Herwig Meyszner, who has also produced concert films for the likes of Saxon, Exodus and Kreator, with a multi-camera no-shot-missed shoot that captures not just the energy onstage but the energy on the floor. It was the final show on the tour, and Motorhead were firing on all cylinders. Three years after this gig, Motorhead would play their final show – also in Berlin.

All the grit, the lizard-esque charm. The dirt and the low-down filthy rock n’ roll that we all adore to death, is here in this package. Like muddy boots stomping down hard on a Triumph or a Sunbeam – maybe even a Harley Davidson – the boisterous charm and dirty, dangerous, sweaty gusto that was Ian “Lemmy” Kilmister, Phil Campbell and Mickey Dee. Motorhead! One of the most iconic and most important groups to ever champion rock n’ roll. Louder Than Noise… Live In Berlin is everything a Motorhead aficionado could hope for.

The classics like the monstrous smash hit, Ace Of Spades, Damage Case, Overkill, and this is bloody blistering rendition of Overkill, let me tell you – and Killed By Death are all here. So are some of the deeper cuts that aren’t as well known, less you’re talking to a Motorhead diehard.  Further highlights include a favorably feral Rock It, from the wrongfully oft-ignored Another Perfect Day record. And a rudely raunchy version of You Better Run. Hearing The One To Sing The Blues here, warms my heart. Taken from the fantastic 1916 record, this was always one of my favorite tracks – the dram solo in this version, is particularly great, too. The hook is so massive, and the chorus and solo just perfect. Thus what we have here is a collection of songs that span the lifeblood of the band. A little of this, some of that – and a bloody raucous, speaker exploding good time. After all, you can’t listen to the loudest band to ever grace planet earth less your receiver is turned all the way up to eleven. Go’oan! Turn it up! Louder! Louder!

The sound and production are bang on – which often isn’t the case on a live recording. The audience is audible, also, which is a plus. If you’ve heard the latest live album from Iron Maiden, Nights Of The Dead, you’ll know why I’m making a meal out of that last statement. Everything here is loud and pristine. Musically, the band are as tight as ever, and the stage banter is worth the price tag alone. Louder Than Noise… Live In Berlin is a solid addition to any record collection. Yeah, I know what you’re thinking – I’ve already got a bunch of live Motorhead records. So what? You haven’t got this one yet. This isn’t just any band, this… this is fucking Motorhead!

I would have liked to have had songs such as God Was Never On Your Side, Love Me Forever and I Ain’t No Nice Guy included here. But I understand. There are just so many deserving tracks in the Motorhead canon to select from. Also, I am aware that Lemmy was growing a little tired of just playing the hits night in, night out. Perhaps there’s a few more of these forgotten gems sat in a vault somewhere, to feed my desire. And to be honest, there are songs here that wouldn’t normally have been included on a Motorhead live album, and that makes it that much more special.

I must add, that profiteering off of the Motorhead name in recent years has irked me something fierce. This booze and the next. It doesn’t sit well with me. When it comes to unreleased music or live recordings though, I’ll be all over that like a fly on shit. Lemmy is gone. Phil “Philthy Animal” Taylor and “Fast” Eddie Clarke, too. But their music is forever. Their legacy. There’s something beautiful about that. The Compact Disc version comes with a DVD of the gig, or there is a black vinyl LP option. For the true fan, there is a boxset that contains the CD, DVD, LP – and more. You can secure your copy by clicking here. Oh there’s also a digital option if you’re into that sort of thing.

For Fans Of: Saxon, Girlschool, Music!