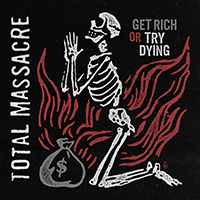 LA’s Total Massacre lay down a quick slab with a new single, Get Rich Or Try Dying. Dig that play on words.

These days, using the term punk doesn’t guarantee that the listener is actually getting a punk record. Equally, the term political punk could mean you get watered down dreck (we’re looking at you, Anti-Flag) but neither of these conundrums needs be worried about here. Total Massacre harken back to the glory days of punk. When it was dangerous. Viscous. With purpose. Pulling influences from mid-80s punk and hardcore bands, Total Massacre use the K.I.S.S method. (Keep It Simple Stupid) Musically simple but that was the way things were, and I respect that.

This one track is my first dance with these Los Angeles punks, and I like what I hear. Then again, I have a soft-spot for the originators of the genre, as well as the so-called ’82 wave (UK 82) and so on and so forth. On Get Rich Or Try Dying, we get simple yet honest and angry punk. Proper punk. Makes sense to me that, if we have to bring back 80s fashions; we should be privy to 80s sounds too.

I suppose releasing six one-track singles instead of an album makes sense for a band trying to catch the ear of an over-saturated genre. One song a month for half a year means more chances of catching the eyes and ears of potential fans. I get it. Interesting approach. What I do find odd though, is that the one track in question weighs in at less than a minute and half! In theory, if all six of the incoming tunes are around this length, Total Massacre could release them all on a single seven inch come month seven. Perhaps this is a better idea than I’ve given them credit for.

A long running joke of their live shows was vocalist Cap’n No Fun announcing that the title of every song was “Fuck Trump”. Which leaves me wondering what the lads are going to do now that the Orange baboon has been exorcised. What will they write about now? True, the Orange one left a lot of mess in his wake that could potentially fuel several full-lengths, but what use is it for a political band to rehash the era of error? Take that as a warning, Joe Biden, you’re under the microscope now. (Hey! Biden! Leave those kids alone!)

Each month for the next six months, Total Massacre will be releasing a single. This here, this is the first of the batch and if this is a guideline for what is to come, then fans of old school Punk and hardcore will have something to look forward to. Score your copy over at their bandcamp page. This is a digital-only single. Check them out!

For Fans Of : Gang Green, Blood For Blood, Propagandhi