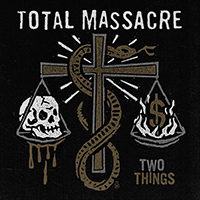 Yes, by now, you probably know the schtick. Another in the series of sub two minute hardcore tracks from Total Massacre is upon us. This has become something like a club, like what NOFX does with their seven-inch vinyl releases, only digitally. A monthly does of hardcore for the addicted. This one, titled, Two Things, follows the same formula as all previous digital singles – as you’d expect.

Heavily rooted in the American hardcore scene, predominantly that of the nineteen-eighties, Total Massacre’s new effort once again strives and struggles on the same merits as mentioned in previous reviews. For one, it’s a very short track, chiming in at just a minute and forty-eight seconds. Two, it leaves the listening wanting more, and feels peculiar not having anything else following it up. Its abrupt end has the listener ask is that it? And, again, yes, that was the whole package. Why they wouldn’t drop two or three, maybe four songs at a time instead boggles me. Then, they could release physical vinyl singles too. But that’s just my opinion, isn’t it?

Right, lets get to the music then, shall we? What we have here, is quick jab at the national debt. This time bridging the gap between punk rock and hardcore, until the vocals kick in , that is. From that point, the viscosity of the hardcore beatdown reigns over the tune. The aggressive nature, the rhythm and pulse. As always, the guitars and slick, fairly simple. There’s a quick neat solo that pops up and a pair of slick bass lines that protrude – elements that make for an interesting albeit swift listening. Yes, I’m harping on length again. And you know what? When the next one drops, I’ll probably mention the length on that one a bunch of times too. I’m a creature of habit. Watch them drop a seven minute progressive rock jam now, and total skew my opinion.

I still think this is an odd way to promote the band. Still see the genius in it too – keeping the bands name relevant and on the radar. Like an advent calendar at Christmas, we get to open a new door every now and then a reveal a little bit more of the puzzle. For this one, I threw all the singles into the same playlist and the flow is neat. Better as a whole than as a set of random tunes that always, and I mean always, leave me thinking where the here is the rest of the damn thing? I’ve never been what you might call a patient man.

This, like all the other one-track digital singles Total Massacre have dropped this year, are available from the bands bandcamp page on a pay what you wish module. Toss these lads a few coins, if you can.