The Vikings have returned to Canadian shores, this time in the Draken Harald Herfagre. A perfect replica of a Viking long ship.

More and more evidence is being uncovered alluding to who the first European settlers were to arrive on North American shores. Same would say Jacques Cartier, others Christopher Columbus or John Cabot, but more and more, the evidence seems to point towards the North and to the Vikings.

This week, the Draken Harald Harfagre, a Viking long ship built in Norway in 2012, arrived at Montreal’s Old Port. And the response was astonishing. 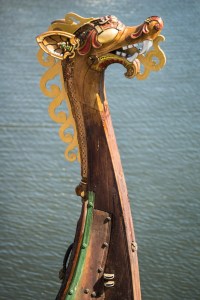 Hopeful visitors stood in line for up to two hours for a chance to board the vessel that had crossed the Arctic ocean. She and her thirty-four person crew set sail from Norway on April 24th en route to Iceland. From there they sailed to Greenland, then across the Davis Strait where the Titanic sunk after striking an iceberg. Onto Newfoundland.

A route that could have very well been sailed during the Viking age.

From there the ship sailed to Quebec City. Once there, it received such a positive response, that a stop in Montreal was then added to the itinerary.

The ship itself is a stunning feat of craftsmanship and a true work of art. Much of it is hand crafted and carved. Built in the traditional ways of yore and a glorious sight for the eyes. A watchful pair of Raven’s – an extremely important aspect of Norse culture, keep watch over the navigation deck.

A true labor of love. Spending time aboard this wonderful vessel was an absolute dream. A privilege. My heart yearned to stay aboard and sail with the crew.

Alas, there was no room for another soul.

The front and back of the ship are adorned by breathtakingly gorgeous carvings. Miles of ropes and pulleys to hoist sails seem to sprout from everywhere. A slightly ajar door offers a glimpse into the living tight sleeping quarters that these brave men and women have endured. Through frigid and dangerous seas.

I spoke to crew member, Jonas Adenmark Thoreson, about the perils and thrills the crew has undergone thus far. Aand they were many. I could have listened to him speak for days. Seemingly everything that could break on the ship has. Everything has been repaired, patched up and the journey continues on.

They’ve dodged icebergs and large waves. Lost their sail to the sea and had to fight to retrieve it. Reeling it back on-board before it was lost to the depths forever. He refers to the ships two engines as “an engine and spare parts”. As one of the two always seems to be problematic.

Crew members have been thrown across the ships decks. Braved extreme cold and wet conditions and have grown together into a group as close-nit as family.

The Draken Harald Herfagre will soon depart Montreal and set sail down the St. Lawrence. Heading towards Toronto, where she will participate in the Tall Ships Challenge on the Great lakes.; Eventually arriving in windy Chicago sometime around the 8th of July.

Until then, she rests in Montreal’s Old Port. Accepting curious sightseers and history buffs alike.