The madman extraordinaire, Ozzy Osbourne, is back with a new record named Patient Number 9, through Epic Records. 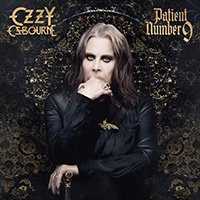 At 73 years of age, nobody would hold it against the great Ozzy Osbourne had he decided to retire, yet like his good friend Lemmy Kilmister, that doesn’t seem to be in his DNA. Like he said on 2007’s Black Rain album – he doesn’t want to stop. Ozzy of course is best known for his part in Black Sabbath, perhaps the most influential band to ever play heavy music, and is now on his thirteenth solo record with Patient Number 9. It’s looking more and more like Ozzy, like Lemmy, will keep on going until he quite literally drops – and I respect that a great deal.

Since 1966, when he was vocalist for a band named Rare Breed, Ozzy has been churning out some of the most memorable songs in heavy metal history. If you do the math, that means that Ozzy has been singing professionally in bands for fifty-six years. That’s more than half a century. In that time, Ozzy has brought some of the most iconic heavy music ever made to ears around the globe – and Patient Number 9 only furthers that incredible legacy.

See Also: Megadeth “The Sick, The Dying… And The Dead” Review

Despite age and illness, Ozzy still sounds as he always has – his voice as crisp and great as it has always been. Lyrically on par with the days of yore, and just as poignant as ever.

With a slew of special guest musicians in the fold, the most intriguing might be the one he has the greatest history with – that of course being Tony Iommi, who played with Ozzy in Black Sabbath. The duo pair up on two tracks which end up being among the better tracks on the album. Little surprise there. Iommi is still a fantastic guitarist, who somehow can still find great new riffs despite all the years. You’d have thought there were no more riffs and licks to find, seeing as he has already written them all. Iommi and Ozzy remain the dream team, and hearing them play together again is a treat unto itself.

Asides from Iommi, other guests on Patient Number 9 are numerous and of the utmost quality. From Eric Clapton, Jeff Beck, Mike McCready (Pearl Jam), Josh Homme (Queens Of The Stone Age, Kyuss) Taylor Hawkins (Foo Fighters) and of course long-time axe-man Zakk Wylde (Black Label Society) and former bassist Robert Trujillo (Metallica, Suicidal Tendencies). This a continuation of his previous record, 2020’s Ordinary Man, that, for some bizarre reason, had Post Malone and Travis Scott as guest musicians. This time around, Ozzy has people play on his record that actually make sense.

Ozzy has always been surrounded by the best possible musicians – from his days with Black Sabbath, into his solo career where he had incredible talents with him always. From Iommi, to the late Randy Rhoads and to Zakk Wylde – there has always been a top notch guitarist at his side, and on Patient Number 9, he has a whole slew of legends picking riffs, licks and chords for him. Never did I think I would be hearing an Ozzy track with the strings strummed by the incredible Eric Clapton, or Jeff Beck for that matter. Yet, here we are. This is modern day Ozzy, who had a great duet with Elton John on his last record.

Now, normally when a record is so star-studded as Patient Number 9 is, you get a room full of ego’s all vying for attention. Total wank. Not here. This album is all about Ozzy – and the talents that have joined on to create this formidable album all seem all to happy to have been invited to the party. All these elements combine to create a great album.

It’s not just musicians that got in on the fun, either. Comic book creator Todd McFarlane, who once sculpted Ozzy for a toy series way back in 1999, had his hand in the animation of the accompanying music video for the album’s title track (see below). “My demons were animated and can be seen during the Jeff Beck guitar solo in the song,” wrote Osbourne on Twitter.

Although he may be known as the Prince Of Darkness, Ozzy’s most recent records have been more about celebrating life than anything else. Sure, there is a morose underlining to a lot of the songs of the past few records, speaking about the end and his imminent demise (aren’t we all a day closer to our deaths each day we wake up?), illness and all that – these albums have also been about pulling friends into the recordings, about doing what he loves most; making music. The passion is still there and it shines through on every track on Patient Number 9.

The final word on Patient Number 9 is that the album is surprisingly good, and although Ozzy rarely – if ever, misses the mark, this collection of songs is perhaps the best material he has put out since Osmossis. The best part of it all, is that Ozzy isn’t doing this because he needs to money – the man is rolling in it. This is a labour of love and it shows. The whole record feels like fun – like Ozzy and all his friends had a blast making it. Given his age, if this is to be his final record, it will be one hell of a way to exit. Hopefully though, we are far from the end.

There are a whole slew of physical media variations of Patient Number 9 available to pre-order – including several that come with a comic book with artwork done by Todd McFarlane – the man responsible for the incredible Spawn books. For all the options, check out this website.