Where do I even begin with this? Deep breathes. In, and out. In. Out. Alright. 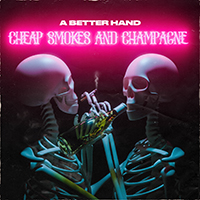 There are times, when being a music critic is the greatest job on the face of the planet. Where your ears are poised, pleased by fresh new sounds and taken on mystical journeys. Times where a band or musician can sweep you up off your feet and drift you away to a far away place in the clouds. Sometimes the music on offer is so great, all your woes and troubles melt away like butter in a frying pan. And other times, where you’re stuck listening to pretentious crap like A Better Hand.

Cheap Smokes And Champagne is more akin to smoking somebody else’s cigarette butts off the floor and swilling warm Budweiser. This is lame. There’s nothing redeeming I can find to talk about. I’ve forced myself to sit through this terrible five song collection more times than I’ll even admit to. Just trying to find something – anything, to be positive about. Even the cover irks me. This is pathetic. Usually, if I dislike something, I’ll just sweep it under the rug, so to speak. But sometimes, something so awful comes along that I just have to warn the world about. This is that. Avoid! This is worse than the Coronavirus.

I can’t decide which aspect of this band I despise the most. The emotionless and haphazard guitar riffs, the boring drums and flat bass lines, or the incredibly whiney and annoying singing. I lie. I can. It’s the godawful singer. I was told this was a punk band. The fuck it is. This wouldn’t even cut it as pop-Punk. Not even close. This is sub-par pop, and that’s me trying not to offend anybody. If this is what passes for punk, then punk is truly dead. Deceased. A smoldering corpse. Regardless of whatever style or genre you want to pigeonhole this under, the end result will still be the same. Just because you dye your hair pink, that doesn’t mean you play in a punk band. Then again, if you told the world you were an indie band, indie fans would be pissed off too. But to hell with it, I can’t find any reason not to call this what it is. Dogshit. There might be six or seven fourteen year old’s that will be offended by this review, and I honestly couldn’t care.

If for some reason you hate yourself enough to want to torture your ears with this garbage, you can throw your money away by visiting A Better Hand’s bandcamp page. Don’t. I’m not even kidding here. Just don’t do it. The final torture-piece is a pathetically whingy track called Get It Right. They sure didn’t achieve that. Here’s hoping this is the last the world ever hears from A Better Hand. For Pete’s sake, let it be the end. Truly awful. Cringe-worthy.

Even Hot Topic kids would hate this.

For Fans Of: Simple Plan, With Confidence, Citizen