One of, if not the most imitated bands in the death metal discipline, Cannibal Corpse, returns, with eleven new slabs of brutality. 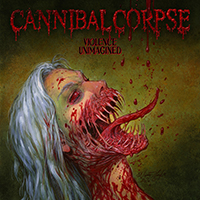 If there was a heavyweight title-holder in the world of brutal death metal, there is little doubt that Cannibal Corpse are top dogs. However, lets be honest here, their last few records have been growing a little stagnant. Same old, same old. Wash, rinse, repeat. Well, like a rusted axe to the genitals, Cannibal Corpse burst back to the top of the meat pile, with the aptly named Violence Unimagined. This record is shockingly aggressive, incredibly listenable (Well, for fans of this sort of thing anyway.) and best of all, extremely memorable. Corpse fires on all cylinders, and might just feature career-best performances from all involved.

I’m going to make a bold statement here, and it’s one that should give you a real idea about what we’re dealing with here, with Violence Unimagined. Ready? This, this is the best Cannibal Corpse record to feature George “Corpsegrinder” Fisher. How’s that? Bold enough? With that said, I’m going to stick to an old viewpoint here, too. The best Corpsegrinder recording, is still Monstrosity’s Millennium, and the best record from Cannibal Corpse, remains The Bleeding. However, Violence Unimagined, in both categories – is a very close second.

The guitar work on this record, is fucking nasty! Incredibly brutal and heavy, with all that old school groove from the old days of the band – yet pretty damned technical too. The reason for that, is obviously the now permanent addition of guitar maestro, Erik Rutan – who became a full-time Corpse earlier this year. Rutan had joined on a fill-in basis, in 2018, for Pat O’Brien who’s return remains currently uncertain due to legal troubles – but that’s a story for another day, kids. Throughout his illustrious career, Rutan has made a name for himself as a talented shredder, but even after learning that he would be appearing on Violence Unimagined, I couldn’t have imagined the beat-down he was about to unleash. This is an incredible record, and one of the best from Cannibal Corpse, without doubt.

Rutan’s first songwriting contributions to the band propel Cannibal Corpse even further than before, on this, their fifteenth album. The groove laid down down on Inhumane Harvest is beautifully nauseating. Groove-laden, overtly technical and aggressive beyond understanding. Rutan, alongside axe-man Rob Barrett, form a dynamic duo – possibly better than any other to feature in the Cannibal Corpse line-up. Meanwhile, drummer Paul Mazurkiewicz remains at peak performance, battering the skins as brutally as the groups lyrical content. And of course, Alex Webster on the bass is just as solid as he has always been.

From the sonic battery that is Ritual Annihilation, the insanely viscous vocals found on Condemnation Contagion and the infernal groove found on Bound And Burned, it is clear that Cannibal Corpse have a gem with Violence Unimagined. To still be performing at such a tilt after thirty-three years, and fifteen studio albums, is impressive beyond words. Often imitated, never equaled. The Corpse has once again raised the bar, and everybody else looking to release new material this year needs to take note.

Pre-orders are available through the Metal Blade Records website. As always, there is a second set of cover art from that shown in the imagine that accompanies this review – and yes, it’s violent. It’s almost like Cannibal Corpse want to have their artwork censored and banned all the time, and after these years, why not keep messing with the censors. Traditions, and all that jazz.

For Fans Of: Hate Eternal, Monstrosity, Rivers Of Nihil