Portland’s Bewitcher are about to release their third record, and first for Century Media records. Cursed Be Thy Kingdom, is a rage-fueled banger! 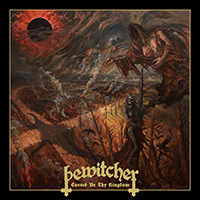 It seems that the further we go, the more older styles of the metal genre are being re-visited and rekindled. There are probably a whole slew of reasons for this phenomenon. Easier access to older records through YouTube and other streaming services – certainly. Having whatever the heart desires at the mere click of a finger tip is both a blessing and a curse, but lets not sail those waters here. Of course, the key reason for this would have to be the simple fact that the music back then was excellent. Raw yet groundbreaking. Influential and real. In a time where everything is too polished, too perfect and squeaky clean, those older records really stand out. There’s something about them that can’t be emulated by modern standards. Grim. Grit. Filth and purity.

On Cursed Be Thy Kingdom, Bewitcher have one-upped their two previous outputs; 2016’s Bewitcher and 2019’s Under The Witching Cross. Stylistically similar, but with everything that made those earlier albums amped up. Throwing ingredients into a cauldron;, black metal vocals, the pace of speed metal and the guitar riffing of early NWOBHM stalwarts, eye of newt and blood of toad, stir and bring to a boil. Serve scorching hot and at high volume.

Beginning with Ashe, a beautiful instrumental piece that harkens back to the early black metal days, where almost every record began in this fashion. Setting the tone, building atmosphere and setting the mood for what was about to erupt forth from the speakers. An element that has been lost over the years, but does sneak back on occasion. Acoustic, almost classical guitar work, accompanied by a moody solo and rhythm piece. Ashe is a showcase for the talent that is about to be let loose.

Leading into Death Returns, which at times has a Metallica-esque feel to it. Ripping tempo with some seriously shredding guitars. Although that formula isn’t new to the Bewitcher camp, the addition of more melodic passages, and especially the heavily blues-tinged licks most certainly are – and they work wonderfully on Cursed Be Thy Kingdom. Truth is, the entire record, for the most part, walks this line. The result is a fascinating set of songs that are both aggressive and moody, ripe with feeling that cuts right through the ribcage into the most blackened of hearts. Soulful. The solo that comes in around the three-minute mark of Valley Of The Ravens, is a perfect example. Topped off with snarled vocals that could easily feature on a black metal record – or a Kvelertak release for that matter.

There are moments where the record’s tempo is increased that extra notch – to eleven. The aptly named Metal Burner is a perfect sampling of this. That is, until it slows to crawl, whisks out a solid solo and picks right back up again. Craftsmanship. Another, would be the record’s title-track, Cursed Be Thy Kingdom, that sees Bewitcher at their most aggressive point of this collection of tunes. The drums are at their most ferocious point, too. Fury. Yet, the aforementioned blues influence is still felt and the vocal patterns of Matt Litton are at their strongest and most diverse.

There’s no denying it, Cursed Be Thy Kingdom checks off all sorts of boxes that are required to create a top-notch metal album. It has a traditional feel to it, sure, but there’s more to it than simply a retro lovers journey down memory lane. The addition of the blues element shows maturity and Bewitcher’s undeniable talent to write hard rocking tunes. There is a serious amount of skill on display here, especially on the strings. The addition of more melodic parts, the blues influence and the overall ferocity of the record combine to create something special and demands to be heard.

Pre-orders can be scored through the Century Media website. Both dark green (Worldwide) clear, orange and black burst (North America) and black vinyl options are available, as well as a digipak compact disc. For digital files, visit the Bewitcher bandcamp page.