The full-length debut record from London, Ontario’s The Blood Of Christ is finally available in digital formats. twenty-three years after its initial release – and despite a recent re-issue on CD through CDN Records.

Jason, the youngest of the two Longo brothers to play in The Blood Of Christ was just 17 at the time of this album’s release. Only 16 when the record was recorded. At the time, “…A Dream To Remember” was extremely well received. Some went as far as to call The Blood Of Christ the next wave of Canadian death metal, following the likes of Cryptopsy, Gorguts and Kataklysm. The elder, Jeff, has just recently returned to the band after a short hiatus. Bringing with him his trademark muddy riff-work. He is also the main songwriter for the veteran group.

In fact, their third demo tape release, “…The Lonely Flowers Of Autumn…” also was heralded as the next big thing. So much so that it earned them their first record contract with Pulverizer records. Alongside Dying Fetus and Fleshgrind, Jungle Rot and Mortal Decay. As well as a European release through Die Hard Music. Everything was coming up roses. See what I did there? No. Ah nevermind.

“…A Dream To Remember” arrived at a time where Canadian death metal was receiving a lot of attention. Perhaps even at its peak. Some of the biggest bands of the genre to ever come from the region had hit the scene – and hard. Gorguts’ “The Erosion Of Sanity” had been a pivotal landmark release in 1993.  The debut full-length, “Blasphemy Made Flesh” from heavyweight title holders Cryptopsy dropped in 1994. Kataklysm’ first full-length, “Sorcery” came in 1995, followed by “Temple Of Knowledge” in 1996. In 1997, Neuraxis released their debut, “Imagery” – the same year The Blood Of Christ unleashed “…A Dream To Remember”. It was an impressive time in Canadian extreme music history. 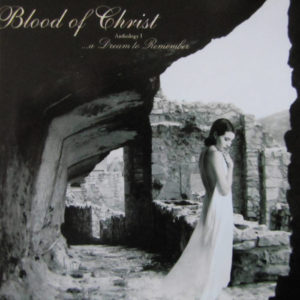 The seminal album in the band’s discography was re-issued in 2018 by CDN Records. Which, in hindsight, would have been the perfect time to offer digital versions of the album. The new version contains six additional tracks. But you’ll have to purchase the compact disc version to obtain those. The digital version follows the original version more closely. As it was meant to be heard at its inception. It also has slightly different sleeve artwork. There is ,as of yet, no vinyl version, unfortunately.

“I feel like we pushed boundaries in those days, we didn’t paint ourselves into a death metal corner and weren’t afraid to embrace our diverse musical taste and influences. The result was a collection of songs that were unique for the era, catchy and well executed. Also when we wrote the songs we didn’t over think it , that’s just what came out from our blood and passion,” says Jason. Playing with words a little perhaps. Name dropping the bands song “Blood Passion”. Yeah, I see what you did there!

What took  so long to get this album available in digital formats? “I’m not to sure to be honest,” says Jason. “I guess we were focused on the physical copies . Better late then never though. We will be adding most of our catalog to Bandcamp.”

“It was a very exciting time,” says Jeff, “but we weren’t mentally captivated by the response to our demo. We were more like kids in a candy store running amok. The music was our candy. Our writing process was very quick, we rehearsed on an almost daily basis back then so it was a whirlwind process. Writing was very organic back then and we didn’t overthink it. Being signed to an American independent label was very motivational and we didn’t take that opportunity lightly. Some of the greatest memories came from that era. Taking our band on the road to new provinces for the first time.”

The album features the late Conan Bulani on vocals. Bulani was the frontman of the group for much of the bands initial incarnation. He would also appear on the 2002 recording, “As The Rain Gently Falls”. Bulani lost a battle with cancer in October of 2011.

“Conan was a good friend, like a brother to us,” reminisces Jeff. “In our minds, he’s a legendary death metal vocalist who stands in the ranks with any of the genre’s most respected vocalists. Conan had a great sense of humor, a genuine love for music and in general, was a regular guy just like us. It was a blast being in a band with him and he was on the same page as us.”

The band were slow to follow up on the release of “…A Dream To Remember”. When you did, the musical direction seemed to have changed quite drastically. in 2002, they released their sophomore full-length, “As The Rain Gently Falls”, and “Breeding Chaos” the following year. The Blood Of Christ also shortened their moniker during this time – moving forward as Blood Of Christ.

“We actually started writing our 2nd album in 1997. Right after the first one was released, says Jeff. “And the music was all recorded in 1999. The business side of things caused the album’s release date delay, and it wasn’t mixed and mastered until 2002 or so. Pulverizer records vanished during that time period and we landed on the Skyscraper music roster. Our third album saw the addition of a new singer, (Dan Hulse) who ultimately wasn’t the right fit and it really caused an off-kilter sound.”

What followed that, was a period of inactivity. The Blood Of Christ fell dormant. Jeff Longo would play with Strings Of Aries and November 1971 while Jason Longo would become involved in a slew of projects. Most notably Mulletcorpse and Baptized In Blood – as well as drumming for Incantation from time to time. It was only a matter of time, however, before the Longo would reunite and a fourth album would emerge. That record being 2018’s “Unrelenting Declivity Of Anguish”. Featuring Chris Gooding on vocals and Mark Chandler on bass.

This would mark a return in sound more akin to that on those early records. Brutal and to the point. Yet, following a tour with Killitorous, it would see Jeff Longo, the groups founder, step away from the group. Sighting family obligations. For the first time in the bands existence – Jeff would be absent. Not for long, however. This week, the guitarist returned home to The Blood Of Christ.

“This was intentional, says Jason on the topic of the bands return to its roots. “When Jeff started the demos and sent them to us, the inspiration was 100% to recapture the feeling and quality of the music we made in 1995 and 1996. A rediscovery of who we really are, purveyors of Epic Dark Metal.”

“We are very excited about this split with vomit remnants, beams Jason. “They’ve been friends of ours for many years and we have a mutual respect for each other’s bands. It is an honor to be doing this split with them! It’ll feature four new songs from us, all written by Jeff & Jason – bringing back the classic epic dark metal sound again. Vomit remnants will be throwing a few new songs on there too! I think it’ll be a great way to introduce both bands to people who might not heard of either band.”

Until then, The Blood Of Christ’s “…A Dream To Remember” can finally be had in digital format. As well as on Compact Disc through CDN Records.