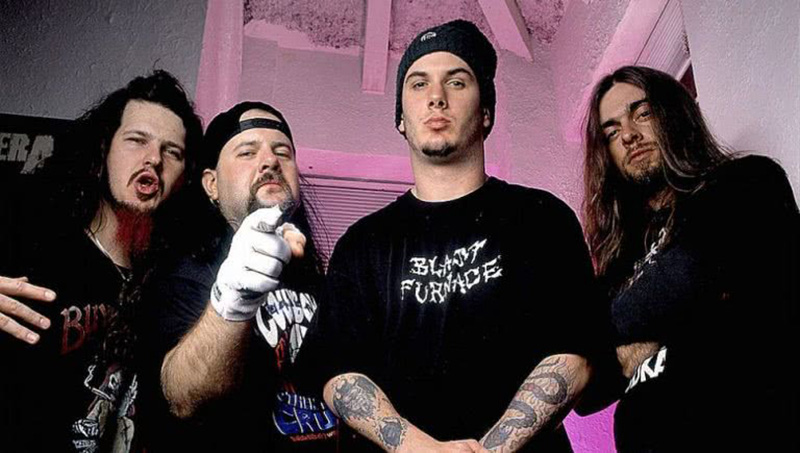 Pantera’s body of work, ranked from worst to best

So much has already been written about the mighty Pantera, but for those of us that were there during the bands heyday, they’re still worth talking about.  From the marauding shredding guitar work of Dimebag Darrel, those killer big riffs and slamming breakdowns and squeals, Dimebag was one of the greats. The power and presence that Phillip H. Anselmo brought to the stage and his impressive vocal deliveries. The driving force of the drumming and massive bass lines from Vinnie Paul and Rex Brown. Pantera were a beast of a band, who surely would have eventually put their differences behind them and returned to tour and possibly record as a band once again – had it not have been for the inconceivable on-stage murder of Dimebag Darrell.

There is no debate about the importance of Pantera to the world of heavy music. They remain as one of the most iconic bands to have ever played, and are still influencing the next generation of heavy musicians all these years since their disbanding. The forty million albums they sold worldwide, and their four Grammy nominations speaks volumes.

For this list, we’ve chosen to omit the early works, the live album and greatest hits discs. Although the likes of Metal Magic, Projects In The Jungle, I Am The Night and Power Metal are integral parts of the growth of the band, they aren’t regularly available and the band members themselves weren’t too keen on associating themselves with them during their prime, either. Instead, we’ll be focusing on everything Cowboys From Hell and up.

Seven years after the release of The Great Southern Trendkill, came this, their final effort. Tensions were obviously still high among the members of Pantera, and that ill-will can be felt throughout this record. The symbiosis between involved parties just isn’t there. Although it had its moments, Reinventing The Steel did little to improve upon earlier releases. Everything that had made Pantera great was still present – it just didn’t click the way it had in the past. Perhaps through a lack of motivation, or unresolved issues, whatever the case, the groove that the boys had become known for was lost.

From here on, the relationship between members only grew worse and with the Abbott brothers growing tired of Anselmo’s dedication to his many other bands, they felt his focus was never again going to be on Pantera, and they dissolved the band. That angered Anselmo and a public war of words would take place between the Abbott’s and Anselmo. Still, Reinventing The Steel had some great moments. Notably on Yesterday Don’t Mean Shit, Revolution Is My Name and Goddamn Electric. 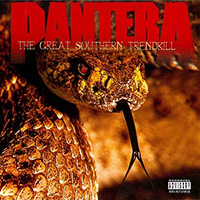 Like Reinventing The Steel, the recording process for The Great Southern Trendkill took place in different cities. The Abbott brothers and Rex Brown laid down their tracks in Dallas, while Anselmo recorded for vocals from the home of Trent Reznor in New Orleans. The lyrics were remarkably darker, filled with wrath and demons about drug use. Anselmo used his time to lash out, attacking the media and recording some seriously morose passages.

This album came at a dark period of Anselmo’s life. Back injuries were taking their toll on Anselmo, who continuously turned to alcohol to numb his pain, and when that no longer worked, graduated to hard drugs, such as heroin. This would eventually result in a massive overdose and Anselmo dying before being brought back to life by paramedics. Tensions began to grow from this point on, and Pantera would never be the same again. The best was already behind them, just nobody knew it yet.

Still, The Great Southern Trendkill was a great record that featured many great tracks. The iconic Floods, which featured some of the best guitar work from Dimebag’s illustrious career. The incredible Drag The Waters and Suicide Note Part’s 1 & 2. Dimebag really was on a roll with this record, while Anselmo unleashed his torment and anguish. 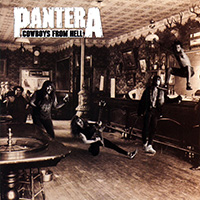 With 1990’s Cowboys From Hell, Pantera re-invented themselves, but were not yet the band they were to become. Many of the elements from past records still made their way into the recordings found of Cowboys From Hell. Their glam and power metal days not fully bled out of their systems just yet. It was here though, that the writing and playing skills of Dimebag were about to be discovered. Dave Mustaine of Megadeth had already seen the potential, in a failed attempt to bring Dimebag to his band before the release of Cowboys From Hell.

Perhaps the full vitriol and aggression wasn’t yet present, but the riffs and the groove were well advanced. The Art Of Shredding indeed. Anselmo was midway between his performance on Power Metal, and what was to come with Vulgar Display Of Power. The edge was beginning to show though, and looking back the signs were there. Still, Cowboys From Hell was all about the riff, that inspired level of groove providing something that hadn’t yet been explored before – at least not on this level. Anselmo’s screams were missed down the line though, those howls and higher notes were so great on this record.

With tracks like Primal Concrete Sledge, Domination – and the legendary Cemetery Gates, Pantera were poised for stardom, yet it didn’t really come with this record. At least, not at first. It would take the two records that came next for metal fans to back-track to Cowboys From Hell, eventually earning it the accolades it deserved. 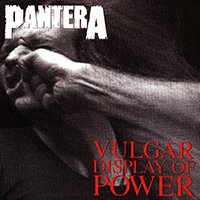 By the time Vulgar Display Of Power saw the light of day, the bands transition to balls-out heavy had been completed. The metamorphosis was huge, and what emerged from the cocoon was one angry beast of a band. The change in style and sound from Cowboys From Hell was like night and day. While most bands change for softer tones and easier listening, Pantera had gone the opposite route, and amped everything up ten fold. This was the beginning of what we now call groove metal, and still one of the most influential records of the time.

With Fucking Hostile, Pantera began anew, again. This time becoming the band that would earn them their time in the limelight. This was Cowboys From Hell on steroids, and as the album cover suggests, was about to land a left hook clean on the cheek bone.  From start to finish, Vulgar Display Of Power was a, well, vulgar display of… power. The clue was in the name. Shredding guitars, thrashy riffs, pounding drums and grind and grit throughout. Anselmo’s new-found aggression layered on top of the vocal patterns and delivery he had used for Cowboys From Hell was groundbreaking. Earth shattering – and about to revolutionize the way mainstream metal bands went about their creations.

So many prime cuts came from this record. Of course, Walk comes to mind instantly, but on tracks like A New Level, By Demons Be Driven and the massive hit that was Hollow, Pantera had established themselves at the top of the pile, with no contenders for their heavyweight title. That is, until they out-did themselves with Far Beyond Driven. 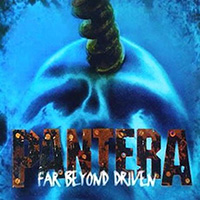 As good as Vulgar Display Of Power was, it was with 1994’s Far Beyond Driven that Pantera fully exploded onto the scene. Simply put, Far Beyond Driven was Pantera at their pinnacle, at their best. The height of their career and the bench marker upon which all further albums of this ilk are still measured. As they had done, shifting gears from Cowboys From Hell to Vulgar Display Of Power, Pantera had found an even higher level of thrust with which to propel themselves.

The success that came with the release of Far Beyond Driven was massive, and all of a sudden, Pantera was the band in the metal realm. Right off the bat, the new snappy sound found on Vinne Paul’s drumming sets the tone. Dimebag’s guitars are tuned lower and Anselmo is instantly on the war path and as polished as he ever will be throughout his career – this is Anselmo, and Pantera, at their absolute best. Violent and seriously groove-laden tunes, every one a banger. Far Beyond Driven is quite simply one of the best metal albums to ever exist.

Pure power. Stronger than all that came before. On Becoming, the band hits their peek performance, everything that Pantera was is on this song. Those unique riffs that are so mind-melting in complexity, yet so melodic and harmonious at the same time – Groove. Lyrics that might not always make sense, but god damn are they powerful and fun. A record that encapsulates Pantera perfectly – seeing these songs live was also something else. The grind on the early moments of 5 Minutes Alone. The groove on I’m Broken, the brutality of Hard Lines And Sunken Cheeks, and Slaughtered, and the shredding on 25 Years. And who could forget the brilliant rendition of Black Sabbath’s Planet Caravan. In short, Far Beyond Driven is a timeless masterpiece.