The boys from Glastonbury are back for round two. Sad Night Dynamite finally dropped their second release Volume II, out on Parametric / Atlantic records next week. 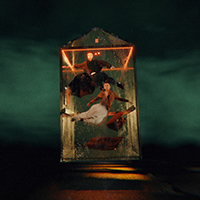 Already establishing their own niche during the pandemic, with the release of their Volume l Mixtape release. The young duo comprised of Archie Blagden and Josh Greacen, have managed to  produce a unique style. Here, on their follow-up sophomore effort – their second release in a little over a year, Sad Night Dynamite are really beginning to cement their name and shed the up-and-coming tag for that of an established force, and one to be reckoned with.  A dynamic blend of electro-pop, hip hop, jazz, rock, with a hint of musical chaos.

Fusing Greacen’s angelic voice with Blagden’s deeper tone, the limitless chemistry between the pair, has created a seamless transition between genres. Journeying into a world of cinematic sampling, their distinct brand of storytelling has spawned a place for their music to exist in different times and spaces. Giving us an image of their own dystopian future-world.

“This is purgatory,” explained Blagden, “It really felt like we were in a space where we were neither dead nor alive. It’s a love letter to mortality and explores that idea in many different lights.” Each track takes on a varied view of death, anxiety, and restlessness. All things which we have encountered personally in the last couple of  years.

Beginning with songs written and released over the last two years. Strictly due to the pandemic, they have become more of a virtual streaming success. But it’s not such a bad thing. Being able to connect with listeners on the right level, at the right time is key. With a huge array of influences. Gorillaz to Dr Dre, Massive Attack, The Specials and sampling magicians The Avalanches. I think the groups appeal is open to wide range of musical tastes. It’s hard to completely define where they fall on the scale.

Look Alive features English singer, producer FKA Twigs. Who had previously helped them out in the studio, this time lending her vocals to a great bass driven club track.  Featured on two songs, are two fierce female artists, FKA Twigs and Moonchild Sanelly , adding a perfect contrast to the duo’s already strong sound.

South African artist Moonchild Sanelly, collaborated on the writing of Demon. Based on her personal demons, it is a tension filled story built around two opposing views that came together in this tale of exorcism, of the opposite sex. I really enjoyed it when it was first released and still do, which says a lot. You can really feel the contempt in her vocal styling, truly releasing the demon haunting her.

Split Back is by far the standout track on the mixtape. An absolutely beautifully crafted haunting vibe overall. I admit, it’s been on repeat since I first heard it. And with every repeated listen it grows on me. An eerie soundscape, of vulnerability.  Some would say they softened their sound, especially with this track. I think they were more hyper focused on certain elements that created a whole new dynamic to their sound. Less looping beats more exploration and pushing individual limits.

Psychedelic Views was the first taste of new material Sad Night Dynamite released, after Volume l made its rounds during the first year of this lock down. It was a precursor to the direction they were headed, I hear a lot of progression and I enjoy the dreamlike state it depicts. As we all had the feeling of being stuck within a nightmare, in the last two years.

With studies showing this endemic and isolation, has led to an increase in the use of recreational drugs, with an emphasis on psychedelics. This track is a dark tale of slowly losing your mind to drugs and obsession with fame. It gives the listeners a simulated psychosomatic high. Coupled with their art house videos, with the intent to fill your brain with twisted visuals,  giving birth to another dimension.

Wrapping up this seven track mixtape is the enigmatic Dropped Eyes. Giving listeners a happier, uplifting beat serving but up a sadder context lyrically, it completes the tales of staring death in the face. We all had to come to terms that this world we knew would be dramatically changed,  in this dark time in history. With all the constant fear mongering, this was a nice slice of escapism with the imaginary world they created.

You can grab yourself a copy Sad Night Dynamite’s new record, Volume II, or a shirt or combo package right off their official website. Check it out!

For Fans Of: Gorillaz, The Streets, MF Doom