These days, it seems that criticism is a dirty word. Thus, when an album like this falls into my hands, the thought process quickly becomes a question of if I should write about it or ignore it and pretend I’d never heard it. Sticks can break bones, but the old adage of words not hurting anyone is a thing of the past. Today, words kill. My purpose as a music critique though, would be pointless if I were to simply skip over the dreck in favor of just blowing smoke up the right bungholes. So with that in mind, lets talk about the new Six Feet Under album. 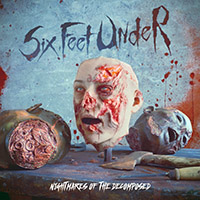 I can clearly remember the day I learned that Chris Barnes was no longer the vocalist for Cannibal Corpse – one of my favorite bands at the time. And I was devastated. How could they continue on with Barnes? His voice was so synonymous with Cannibal Corpse and his lyrics were as outrageous as the bands oft-banned album covers. I was dismayed. I had just seen Cannibal Corpse touring for The Bleeding, which lets not mince words here, is a masterpiece in the death metal genre. Barnes’ presence on stage was frighting, and Cannibal Corpse was every bit as amazing as I had hoped they would be. It was my first time seeing them, and the last chance I had at seeing Barnes with them too.

Shortly after, it was announced that Barnes had a new band and a new album was coming out. Let me tell you, I didn’t hesitate to buy that album on the day it launched, and although, it wasn’t what I had hoped for, I enjoyed it. Played it frequently and went out to see Six Feet Under when they came to town. Even splashed out some of my beer money for a tour shirt. There may or may not have been some mescaline consumed that night too, bought from the crusty punk that was always sat at the bar of the Backstreet. Or was it called the Cathouse then? That place changed names to avoid being shut down so many times, it made your head spin.

So then comes their follow up record, and I regretfully bought that too. Warpath was subpar at best. It sounded like the leftover riffs Alan West wasn’t going to use in Obituary and that is a theme I felt into their third album, Maximum Violence, which I regretfully also purchased. Fool me once, then fool me again, it would seem. It was the last album I would buy though, and I generally chose to ignore them from then on. Besides, George “Corpsegrinder” Fischer was filling in well with Cannibal Corpse and they were putting out some solid slabs of death metal.

Twenty years on, and a new Six Feet Under record, Nightmares Of The Decomposed, makes its way into my hands. Now, two decades is a long time, and I had heard a lot of good things about Six Feet Under in the time since I last checked them out. Perhaps this was a good place to give them another shot. Turns out it wasn’t, but we’ll build to that. I wasn’t even aware that Allan West was no longer in the band, nor that Jack Owen was. Now, this is probably why I chose to give Six Feet Under the time of day again. Owen was on probably the best Cannibal Corpse records written, including all those that Barnes sang on. The thought of these two madmen reunited was quite honestly thrilling. Right up until I heard the record that is.

How can these bland, boring riffs that go absolutely nowhere be written and performed by Jack fucking Owen? I had such high hopes for Nightmares Of The Decomposed. I seriously did. Instead, I feel like I did when I bought Warpath – only Warpath is the better record. I went back and checked. It still sucks, but it slays Nightmares Of The Decomposed. I’m almost concerned by how awful Owen is on this album, though. There is no life to these riffs at all. No feeling, no groove and they are completely devoid of any form emotion. Less you count boredom.

So then, I thought to myself, this must be one of those times where you have to listen to it a few times for it to really seep in, you know? We’ve all found that album that we didn’t quite get at first, but in time, it soaks in and something clicks, and your brain just yells oh I fucking get it now. So I listened to it again. And again. And again i realized I’d been had like I had been all those years ago. This wasn’t getting any better at all. There wasn’t a solitary second where my feet were tapping or my head starting nodding. Nothing. This really is as bad as I originally thought.

And what the shit has happened to Barnes’ voice? There’s a man I see on my daily commute, swigging cheap beers, yelling at lamp posts and begging for change – and his voice sounds just like Barnes does on Nightmares Of The Decomposed. If he had dreads instead of the matted birds nest on his head, I’d consider asking him if he was the singer of Six Feet Under. This is the man that burst out some of the most gut wrenching bile soaked vocals ever put to tape, and now this. Hollow and forced. Without rhyme nor reason. How has this happened and who was it that thought this was worthy of release to the general public?

This has to be the worst death album I can recall listening to. I tried. I really did, but this is putrid. Nightmares Of The Decomposed is a terrible album, I’m sorry to say. On the plus side, I rediscovered The Bleeding and Haunted. So, there’s that.

For Fans Of : Not recommended