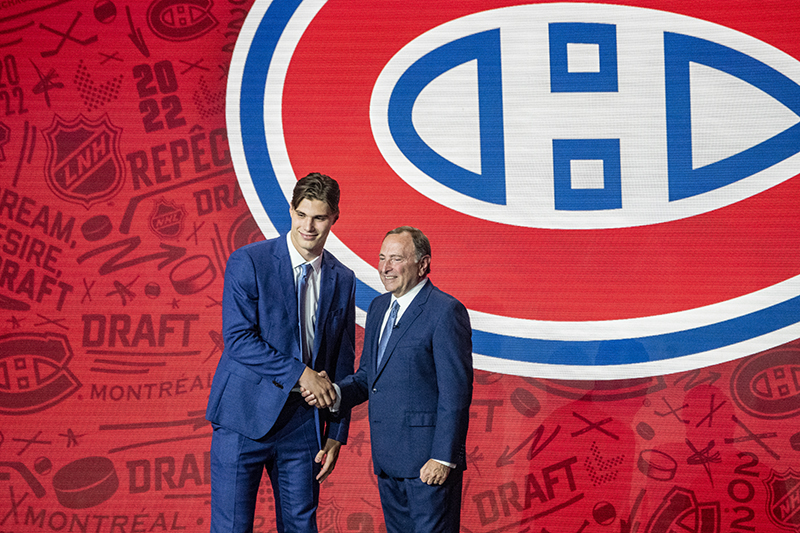 With the first overall pick of the 2022 NHL draft, the Montreal Canadiens chose to go for size, selecting Slovak power-forward Juraj Slafkovsky.

For months leading up to the draft, the consensus was that Kingston Frontenacs center Shane Wright was going to be the top pick come draft day. However, in the final weeks, scouts began to sour on Wright, and turn their attention towards another young player coming off a dominant performance at the IIHF World Championships. Still, with Montreal’s decades-long search for talent, with size down the middle of the rink, most pundits still believed the Habs would select a center with their first pick.

When the announcement was made, and Slafkovsky’s name was called, the arena was quite audibly shocked. A collective gasp, followed by a mixture of cheers and jeers. Later in the day though, when Slafkovsky was spotted making his way towards an interview, the locals chose to show their apparition for their new left winger with a healthy sing-song and rabid applause. In those first few moments of Slafkovsky’s tenure with the Montreal Canadiens, he has already experienced the bipolar nature of Habs fans. They’ll boo you when things aren’t going so well, but when they are, they’ll treat you as a saint.

See Also: The 2022 NHL Draft was quite an active day

The Montreal Canadiens then took off in an even more unexpected direction, and traded budding hard-nosed defenseman Alexander Romanov along with the 98th pick to the Islanders for their 13th overall pick, which they then sent to the Chicago Blackhawks, along with the 66th pick, for Kirby Dach – an under-whelming young center who has great tools and size, but has struggled so far to make an impression at the NHL level. Dach was the third overall pick in the 2019 draft.

Wright looked displeased from his seat in the Bell Center, sat across the isle for Slafkovsky, and his day wasn’t about to get much better yet. With the second pick, the New Jersey Devils also skipped over Wright, selecting Simon Nemec – the second of three Slovakian born players to be picked in the first round. The Arizona Coyotes also chose to forego selecting Wright, and went with another highly touted center instead – American-born Logan Cooley.

The Seattle Kraken were probably as shocked to have Wright still on the board by the time they took the stage as those in attendance were, as the Kraken snapped up the visibly frustrated Wright at fourth overall. The murmuring from around the floor of the draft were that Wright has a bit of a chip on his shoulder, and a bad attitude, and judging by the way he starred towards the Montreal Canadiens table now as a member of the Kraken probably does little to dispel those accusations.

With the fifth pick, the Philadelphia Flyers took Cutter Gauthier, who received a loud ovation. David Jiricek, whom many had going in the top four selections, went to the Columbus Blue Jackets with the sixth pick, while Kevin Korchinski joins the Chicago Blackhawks as the seventh overall pick.

Rounding out the top ten, are Marco Kasper to the Detroit Red Wings, Matthew Savoie at ninth joins the Buffalo Sabres and Pavel Mintyukov at tenth, joins the Anaheim Ducks.

Although controversial, at least this years Canadiens first round pick won’t cause as much chaos as their first pick, Logan Mailloux did last year. At least not yet. Both Mailloux and Slafkovsky have above average size, and frames already ready for NHL competition. Should Wright put up better numbers in the NHL than Slafkovsky, however, you can expect backlash from the very intense Montreal Canadiens faithful.