The wait for new material from Cirith Ungol wasn’t anywhere near that of last years Forever Black – and the new tracks on Half Past Human are great. 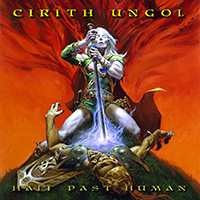 Picking off right where last year’s Forever Black left, comes four new tracks of beautifully nasty heavy metal. When I say new, what I mean is new renditions of songs that were locked up in the bands crypt. These four tracks, are actually re-workings of old tracks. Ones that have never before been unleashed. Perhaps these were extra tracks from the Forever Black sessions – or maybe not. I’m just spitballin’ here. There certainly is a very similar aesthetic and feeling to the songs as to the on Forever Black record.

Shockingly enough, Cirith Ungol didn’t really bode well upon their initial incarnation. Despite releasing four albums that, in time, came to become cult classics in their own right. Perhaps they were just too far ahead of their time to be truly appreciated. Almost a year ago today, in April of 2020, Cirith Ungol rewarded their rabid fanbase’s patience and loyalty with Forever Black, their first collection of all-new material in nearly three decades. Half Past Human further adds to the Californian groups storied discography.

Tim Baker’s warble may be among the most unique in the metal realm. I really can’t think of another vocalist quite like Baker. His delivery has a certain charm to it. Given his lyrical topics, it would be hard to imagine his singing sounding any other way. It has an atmosphere to it, a charm, an ambience that isn’t stumbled upon every day. Given that the band name was taken from J.R.R Tolkien’s literature, and the constant quality and imagery displayed on their album covers, Baker’s croon is a perfect fit.

What could be a more metal way to start off an album than with a revving motorcycle engine. Nothing, that’s what. Thus begins Route 666, a ripping slab of fierce old school heavy metal. Or traditional metal, I suppose I should call it. You get the point. Equal parts heavy metal and hard rock – Route 666 is a an ode to the two-wheeled and sounds like what I imagine flying down an American highway on a Harley Davidson or an Indian motorcycle must feel like. Glorious. Shelob’s Lair flows along the same path. Heavy stop-and-go guitar riffs, those patented growls and snarls through the microphone. There is a seriously groovy solo at about the half-way point of the song. And several solid and fun riffs throughout. How can you not love the traditional metal swagger?

The penultimate track, Brutish Manchild, is where the recording really gets rolling. Its chorus is sure to get firmly stuck in your head, like the Ever Given firmly lodged in the Suez  Canal. We’re talking stuck stuck. The final track, title-track Half Past Human, kicks off with a wonderfully morose acoustic guitar lick. Superbly dark. It evolves into what we’ve come to expect from Cirith Ungol in time, though. In a just world, Amazon would be knocking on Metal Blade’s door, trying to acquire the rights to Cirith Ungol’s work for their upcoming take on Lord Of The Rings. Thus the world is far from just.

Half Past Human is a solid follow-up to Forever Black, almost equaling the mastery of the aforementioned. Definitely worthy of a spot in your record collections. If for the stunning cover art courtesy of acclaimed fantasy artist Michael Whelan alone. There will be a vinyl release of this EP – hopefully on 12″ to properly do this artwork the justice it deserves.

Stay tuned to the Metal Blade Records website for upcoming release information. As of the time of press, details of pre-orders had yet to be released. It’s just a matter of time though. You’d be wise to snap up copies of Forever Black at the same time, if for some odd reason to you haven’t done so yet.