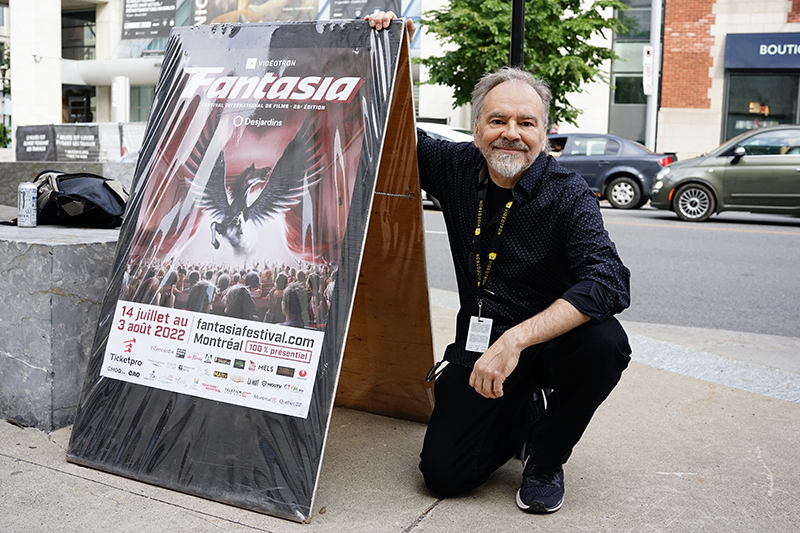 This years edition of the Fantasia Festival is in its final days, and that comes with a mixed bag of emotions. Sadness that the end is nigh, but great joy at how wonderful it has been to return to cinemas again. Streaming from home was a safe way to navigate the global pandemic – but the atmosphere and ambience that comes from sharing a genre film with like-minded cinephiles is irreplaceable.

A viewing at a festival such as Fantasia is so different from a visit to the local cinema, showing the newest Marvel film or Hollywood blockbuster. Fantasia and festivals like it bring in a crowd that are there to see a film – not just for something to do. At Fantasia, you won’t find rude people talking throughout a showing or tapping away on their cellphones. There’s too much respect for that – but you will hear people meow.

Every show at Fantasia has it – as soon as the proverbial curtain opens and the cinema goes dark, somebody will meow, then another, before long a dozen people or more are doing it, meowing into the darkness like cats in heat. But why?

Of course, there is an origin story to this phenomenon. It all began around 2008, with a soon-to-be annual show called DJ XL5’s Hellzapoppin’ Zappin’ Party, which was a series of clips set up to look as if the viewer was switching television channels, which was the style at the time, with the television remote. The brainchild of Marc Lamothe, who put these shows together every year since its inception. Great fun. Always.

In those days, things weren’t yet digital. Films would need some form of tape or reel to show films – in this case, Beta Cam SP 60 minute tapes, and that meant that the tapes at some point would need to be switched.

The first time this programming took place, the final segment shown was that of Simon Tofield, and an episode of his fantastic animated short series, Simon’s Cat. The episode in question, Cat Man Do (shown below), features a hungry kitty that’ll do whatever it takes to be get fed, including resorting to violence – naturally. In the film, he meows incessantly – and then the theatre was thrown into pitch black as the tapes were switched.

“When you leave an audience in the dark, they start to have fun,” explains festival director Marc Lamothe. “Five or six people started meowing which was their way of showing appreciation to the character, to Simon’s Cat, who has quite the attitude.” A meow echoed out from the audience, then another, then a dozen or so were doing it – and thus was born the famous Fantasia meow.

The cat’s meow is a strange expression used to describe something as being brilliant. “We were the first festival to show Simon Tofield’s stuff,” says Lamothe. Since then, Tofield and Simon’s Cat have made many appearances – all to great applause, laughs and the meow of the crowd.

The fact that it carried over to other showings, few at first – to virtually every single showing that takes place at the festival today, was pure happenstance. An unplanned occurrence that today is part and parcel with Fantasia. I guarantee that even during the pandemic, when the Fantasia faithful, the legion of cinephiles that flock from all over the world for three weeks of cinema, I guarantee those people were sat home on their couches – meowing into their own darkness. Seven hundred people were in attendance on the night of the first meow.

“Basically, it’s my fault but I don’t know what happened,” laughs Lamothe. “It was never intended to leave these DJ XL5 shows. Afterwards, you saw people progressively meowing at the festival. It took probably about two years for the phenomenon to reach the whole audience and today, if you ask ninety percent of the audience why they are meowing, they probably don’t know.”

“Most people probably think its because we have cats on the poster but its the other way around,” says Lamothe. “Its a wink – its cool, and that’s why the festival has that red cat on the posters, because we understand the audience are cat lovers and the meow became a symbol or a metaphor for what we are and I feel like this is a way to celebrate our public. They could be yelling stupid jokes or swearing or a lot things, but they meow”

When asked how it makes him feel, Lamothe replied with a single word. Proud. “It’s truly appreciated and it lets us know they are a part of the tribe, because there is a tribe around the public of Fantasia. They’re enthusiastic at whatever age, from twenty to sixty years old but they all share the energy – they all meow”

Many of the guests of the festival, the film-makers and actors, have asked about the meow. This year, at a showing of the superb new film Vesper, there was a scene where a character is ready to another from a book – and the book in question was a children’s book that teaches what sounds animals make. When she arrives at the sound a cat makes, and says “meow” – the entire theatre erupted in laughter, then applause – the director and actors that were sat in among the crowd where most probably bewildered as to why.

“The guests come from places such as China or Korea, all over,” says Lamothe. “They don’t understand why people are meowing but that has become the signature of our festival. We never encouraged that. We never encouraged people to yell and treat us like rock stars at the festival, or treat the films like its a rock show. It all goes back to the audience – they took the shows on themselves and are having fun with it. Our public put the word festive in festival again. A short film became a global phenomenon with our audience.”

This year’s edition of DJ XL5’s Hellzapoppin’ Zappin’ Party will be the final instalment in a much loved annual tradition. “I’m going to be 60 years old and I feel like I did my best work and while the good is still good, Id rather leave when I chose to,” states Lamothe. “After twenty, I can say I had fun – it’s been a fun ride. I don’t feel its become repetitive in any way but at one point you must know when to exit.” Naturally, the adventures of Simon’s Cat were included in the final show.

With it, ends a twenty year romp but there’s a legacy that Lamothe leaves behind him other than these great shows, something much more well known, despite the vast majority of those that indulge in this ritual even knowing why, or where it came from. The meow.

“In five years from now, people wont remember DJ XL5, but they’ll still be meowing and the legend will go on”, concludes Lamothe.