It has been a time since Fear Factory have issued new instructions on the war against the machines, but the time has once again come to rise! 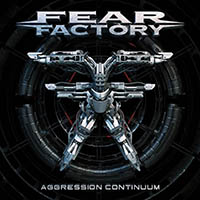 By now, on Fear Factory’s tenth studio album (and countless remixes to boot) the contents of what a new record from Fear Factory will consist of are a practical given. There is a recipe in place here, and the ingredients involved never really vary very much. Nor should they. So how does a band like Fear Factory, who have worked hard to manufacture their sound in such a fashion continue to evolve? Well, it seems, by way of an orchestra! And let me tell you – it works so much better than words can do it justice. Strangely, creating an even more mechanic or robotic resonance through the highs of the stringed instruments.

These orchestral segments are more notable in the two opening tracks than anywhere else, and honestly leave a refreshing feeling in their wake. An enhancement of the chaotic beauty that the band already deliver. A sense of class and maturing – like a fine wine left to age or perhaps more along the lines of a twelve year old scotch, left to stew in its barrel. You get the point I’m trying to make here.

As is used commonly through Fear Factory’s discography, Aggression Continuum offers several motivational spoken passages that serve to amp up their anti-technology message. Almost like the turning point of a film like Terminator – or so many of the films that have been used to urge caution when dealing with the future use of artificial intelligence, where the hero rowdies up the pitchfork mob for the violent final denouement of the film or book. Creating an ambience or atmosphere that is so sorely overlooked in modern art.

See Also: At The Gates “The Nightmare Of Being” Review

Pummeling percussion once again is the driving force behind this release, and is done in brutal fashion. The triplets on the foot pedals creates an uneasy, industrial plant type gallop akin to that of a CNC press pounding out sheet metal cuttings all day long. Those that have ever worked in a machine shop will know exactly what I mean by that. Devastating bass drums. Finding the ability to sound like a machine while drawing attention to the dangers of machinery and advanced robotics is a both ironic and also deeply satisfying. The stop-and-go guitar and bass work further creates that ambiance, string work that was Djent before Djent was a thing.

And of course, the incredible vocal work of Burton C. Bell – switching between raw grunts to soul-soothing clean passages has always been the key element to Fear Factory. I still get shivers when I hear that final verse of Pisschrist twenty-six years on. Where is your savior now. Haunting. See also Zero Signal for another fine example. Fact is, there are prime examples that can be found on everything they’ve released since 1995’s Demanufacture – but that to me, is where the band really found their path. Bell’s vocals on Manufactured Hope fits the bill when it comes to Aggression Continuum. Or Cognitive Dissonance. Or, well, most of the songs actually.

Strangely though, this could potentially be the last Fear Factory album to feature Burton C. Bell, as he left the band late last year due to conflict within the group. This isn’t anything new for Fear Factory though, and it is worth noting that guitarist Dino Cazares has also left the band in the past – and returned. Hopefully a little time away from the band he helped create will ease these new wounds enough for Bell to return to the fold – because a Fear Factory without him just wouldn’t be the same. Honestly as this stage in their career – I don’t see anyone being able to replicate what Bell brings to the band, and surely, Cazares knows this as well.

Copies of the album can be found on the Nuclear Blast website, on CD and black vinyl LP, with a pre-order for a swanky black and blue swirl vinyl version that ships in early October. There are also shirts and shirt bundles on offer as well. The usual merchandizing opportunities. Act now! Supplies are running out!

For Fans Of: Meshuggah, Gojira, Mastodon