New York’s Living Colour have broken their five year silence – by releasing a new take on and old classic. 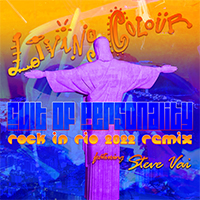 It has been five long years since we have heard from Living Colour – but now we have something special to feast our ears on (that sounds weird, but bare with me). A re-worked version of the bands best known track, featuring an absolute legend rocking out on the guitar, and although it is but a single track, it is worthy of its own article.

At the time of Living Colour’s debut album, Vivid, was released there were very few – if any, fans of hard rock that weren’t familiar with the song Cult Of Personality. It was possible one of the best known tracks of its time, and an embodiment of rock music. It won a Grammy award and has been included on lists that speak about the greatest rock songs of all time.

Released back in 1988, following praise from the Rolling Stones vocalist Mick Jagger, who had seen Living Colour play the historic CBGB’s. In fact, it took Jagger’s input for Living Colour to get signed, and they then went on to turn the music world on its head with this cut.

The song was about as political as you can get, and spoke about celebrity, but on a political level. It asked what made us follow these individuals who were larger than life yet still human beings. In age like this, where celebrities are even more deplorable than ever, thanks to platforms like Tik Tok that encourage people to cook and eat chicken marinated in cough syrup; or the unforgettable Tide pod challenge – there is little doubt that the world needs songs such as this. Especially seeing that the original spoke word parts lifted from Martin Luther King are again included on this version.

Amazingly enough, Cult Of Personality was written in a single jam session, by accident as the band were working on another song. It also remains the biggest hit that Living Colour have had, and the song they are known for, despite having released an additional five albums after it. There are also rumors that a new album, which would be the follow-up to 2017’s Shade is under way.

Now, the classic anthem has been resuscitated featuring the great Steve Vai – and although it follows very, very closely to the original material, Vai’s presence can be felt, making the already amazing song just a tad bit better. This rendition of Cult Of Personality was Living Colour’s finale at their Rock In Rio set where over 100,000 were in attendance and the entire crowd fixated on the bands performance and sang every word to the bands most iconic song.

You can buy or stream yourself a copy at this location.

For Fans Of: Faith No More, Alice In Chains, Steve Vai