Irish punk masters, the great Flogging Molly, are back with their seventh studio album, Anthem, and are roaring for a good old fashioned hoedown. 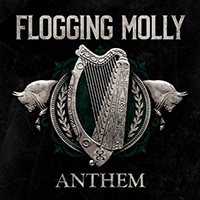 I can still remember, astonishingly enough, when I first heard Swagger – the debut record from the great Flogging Molly. It was Saint Patrick’s day in Montreal, and I was on my way to being kicked out of Hurley’s Irish Pub for getting too drunk, too rowdy, but prior to that, the sound system had been playing Swagger on repeat, and I found myself dancing my bollocks off, pint in hand, for much of it. The following day, I awoke in a gutter, stinking from the sins of the night before – but before shamefully wandering home, stopped into a local record shop to buy myself this new record. I’ve loved it ever since.

Fast forward a tad more than two decades, and here we are, with a new record – their seventh. Being the fool that I proudly am, I hoped that once I pushed play, I’d be greeted with the type of songs that the band were putting out when I first stumbled, quite literally, upon them. Alas, those days are a thing of the past. A fable of time not unlike the things Flogging Molly live to sing about. I suppose all things must progress or else grow stagnant, and that repeating prior triumphs can only propel an artistic mind so far. Living off the victories of the past, too, must grow old. On Anthem, Flogging Molly continue walking their own path – albeit to the beat of a different drum, so to speak.

Vocalist Dave King, who sang with Motorhead’s “Fast” Eddie Clark in the heavy metal band Fastway back in the 80s, a band that had its fair share of hits, formed Flogging Molly along with violinist Bridget Regan. In those early days, the worst days since yesterday, the at the time nameless band would regularly play gigs at Molly Malone’s, and from that, and a bit of Irish folklore, the group found their moniker. According to legend, Molly Malone, was a fishmonger known to sell cockles and mussels through the streets of Dublin by day, and by night due to poverty she was forced to sell her beauty to strangers to make enough money to get by and survive. Or, in other words, she’d flog herself. Flogging Molly Malone.

Over the years, Flogging Molly has toned down the energy levels it produced on early works, opting instead for a more rock n’ roll reimagining of themselves. I suppose this could be called maturity of the progression of their journey as musicians, and despite their later albums still being grand – the loss of that raw, punk energy that spurred them on in the first place, is sorely missed. Anthems such as Devil’s Dance Floor, Selfish Man or Drunken Lullabies, if you’ll excuse the terrible pun, put these wayward Irishmen on the map, by way of that high energetic pulse that fueled those rebellious tunes.

With Anthem, instead of the soundtrack to the mighty piss-up, we have the hazy calmness that comes from the hangover of the following day. The fried eggs and bacon, greasy breakfast remedy that always rights the wayward ship. The pace is slowed, and with a few hints at the legacy of the group here and there, this is a far different sound to those early days I keep pinning for. Anthem represents continuation – natural progression from where the band was on their last recordings some five years ago.

One fine example of the band’s urge to incorporate more rock elements, is the rollicking guitar solo on Life Begins And Ends (But Never Fails), a throwback to the hay day of the genre. Of course, there is no sound more Celtic than that of the tin whistle – and with each puff, the Emerald Isle is reflected. suffice it say that the Irish elements remain intact, but the punk portion has taken a battering. I suppose you could call Anthem a more commercially friendly take on Flogging Molly.

There are some great tunes here, no doubt about it. Some filler, too. Some songs come across like sea shanties. Others like pub fare. Some are rock songs, and some are gloriously Irish. One track in particular, Now Is The Time, contains all of these elements. On A Song Of Liberty, Flogging Molly approach the sort of jam they were producing on the Float record. Possibly the closest they come to that original tone, a fast paced-track. On These Are The Days, King waxes poetically, to the sound of the accordion. A slow, sad ballad. One that stretches King’s vocal abilities to limits we hadn’t heard from him prior to now.

Perhaps it’s age – both of those on the stage and the people that come out to the gigs, that has lead to these slower and more relaxed pieces. Either way, you can’t stop an Irishman for weaving a tall tale, and as such, Flogging Molly keep up the gift of the gab on Anthem – the perfect follow up to 2017’s Life Is Good. How I crave a return to those old timey drunken lullabies, mind you.

Copies of Anthem can be had by following this here link.

For Fans Of: Brick Top Blaggers, The Peelers, The Rumjacks