Toronto’s Dragged In drop a brand new video clip today, for the song “Blackest Moments” from their new record, “LP I”. We here at Modern Free Press have the honor of premiering the clip.

Dragged In is comprised of current and former members of Toronto’s  Brutal Youth and End Program, among others.

The independently released “LP I” is the first full-length album since the band’s inception in 2015. The songs were written and recorded over the last two years, and follow up two EP’s released in 2016. Named “EP I” and “EP II”. There’s a pattern emerging here, only I can’t quite put my finger on it. 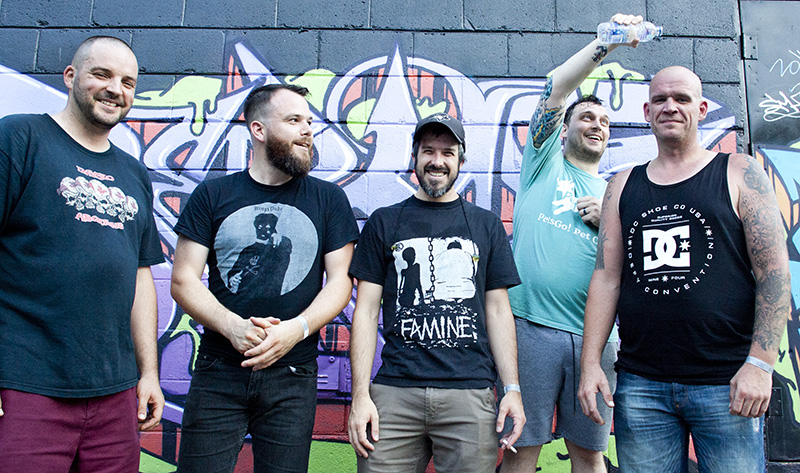 “The approach to writing the material on this record was to write songs that are interesting and different from other releases. But staying true to the band’s roots and eclectic tastes.  We grew up listening to great Hardcore and Punk bands like Sick Of It All, Minor Threat, Dayglo Abortions, Bad Brains, Black Flag, Poison Idea, DRI, and Gang Green.  We love those bands, as well as we love classic metal too. And then Fugazi, Drive Like Jehu, and other great post-punk and alternative acts are total influences on our sound.  Our version of these sonic references finds its way into how we write and structure riffs, and it totally shapes how the songs come out in the end.”

Dragged In were going for a “big and powerful sound” for “LP I”.  To achieve this, they decided to track drums at Halo Studios, in Hamilton, Ontario. Located above Hamilton Punk venue This Ain’t Hollywood.  “Halo was chosen to get the benefits of a large and open live room.”  All other tracking was completed by the band’s rhythm guitarist Ryan Cox, who works from a home studio as an audio engineer for his own venture DARC Productions.

Suffice it to say, Dragged In achieved exactly that. “LP I” sounds like a monster in total beast mode. Mission accomplished.

Once tracking was completed, the band approached Jerry Farley to mix the record. Farley, of course, has worked with the likes of Sick of It All, Madball, Every Time I Die, Lamb of God. According to Dragged In, working with Farley was an easy choice because “we heard the work that Jerry had done on the last two Sick of It All releases, and felt he was able to get exactly the sound we were after.  It’s really important to find someone who knows and truly likes the genre.  They tend to approach it with a keen reference and similar enthusiasm.  Jerry was just that, and he was incredible to work with.  His genius and creativity on the mix really speak for itself in how it turned out.  The endless exchange of Kids In The Hall punchlines from our initial meeting to the end of the project sealed the deal.”

The bands brand new video clip for “Blackest Moments”, was created during the pandemic. While Canada and the world are currently undertaking measures to prevent the spread of the deadly COVID-19 virus.  The video was made through masks and gloves and while using the rules of “social distancing”, naturally.

“It was fun making the video” begins guitarist Marty Poulin. “I thought our drummer Bruce’s idea to have us each do our parts individually in our rehearsal space in masks and whatever gear was great. It all really came together very quick. I don’t think we put a lot of thought into it, just kind of something fun to do to keep us moving forward/sane. It really sucks not being able to practice as a full band though. Hopeful for that to change soon.”

“It really all came together easily and quickly, likely because we eliminated any clever ideas from entering the creative process, says bassist Dave Fenton. “Music videos are always a weird experience.  Mostly because it’s hard to replicate the energy of the live performance while playing along to a pre-recorded track.  This was no different other than we did it without the other members present and while wearing protective gear.”

“As for being in a band right now, it’s been weird to just stop doing any of that,” continues Fenton. “We usually jam once a week and we don’t tend to miss too many.  So having that outlet gone, just all of a sudden, on top of shows has been tough.  It has been a pretty tough pill to swallow just because of how much we love doing that together.”

Four days ago, Torontonian citizens took to Queen’s Park to protest the pandemic and related restrictions. The second such event in as many weeks. To which Doug Ford, Premier of Ontario, referred to the protesters as “a bunch of yahoos”. “What just burns me up more than anything, more than them standing out there, is I look out the window and I see our Canadian flag being flown upside down,” Ford said at a press conference.

When it comes to Punk and all its sub-genres, protesting is par for the course. At its rawest, most pure form – Punk is protest music. It is inherently punk to protest things that are wrong or seek to restrain human rights. But is that the case here? At the time of press, Canada has 62, 458 confirmed cases of the deadly coronavirus – including 4,111 deaths. Without a doubt, living under restriction is a difficult task. For anybody. But the loss of life is worse.

“I think protesting is “punk” when you are providing a voice for the marginalized and undeserved,” says Fenton, “especially when it is in spite of systems that are built to oppress them and benefit a small few with power.  I view the current state of emergency not as an act of oppression, but an act of protection.  We are fortunate to be in a country where the situation is forcing our politicians to listen to our scientists and make informed decisions.  The healthcare professionals are saying this is in our best interest? Who are these protesters?  Just a bunch of whiners who really want haircuts and beach hangs, and have no evidence to back up their stance.  I guarantee you wouldn’t see any of the current protesters at a rally for a real cause.  Would love to be proven wrong though.”

“I don’t think there’s anything punk about protesting lock-down measures during these times,” states Poulin. “I can see people going a little crazy with not being able to work and do normal things outside. But this to me is just an unprecedented time for everyone. It doesn’t surprise me that there would be trying to call shit on our government. I want a fucking haircut too but I’m not going to go protest.”

The members of Dragged In are also members of Brutal Youth and End Program – two great Toronto-based bands worth a listen. (We’ve included links to their bandcamp pages, in case you hadn’t noticed.) Now that the ability to perform live is practically gone for the foreseeable future, releasing a new record during this outbreak must have repercussions on the ability to promote the album.  As well as on the mental health and well being or people that are accustomed to being in a van, on the road. Playing live music on a consistent basis.

“Doing a normal release and playing a bunch of shows  was the plan initially,” says Fenton. “We had a few lined up in April with Sick Of It All and Agnostic Front that were postponed until August, so stay tuned for updates on those.”  Given Dragged In’s style and sound, playing alongside bands such as Sick Of It All and Agnostic Front is the perfect setting. Or would have been. Hopefully things return to a place where live music can again thrive and soon.

“Once all of this hit, we decided that we wanted to release the record now so that people would have something to do.  We have created a bunch of content for the release hoping to substitute playing live with other forms media for people to pass the time with and hear the record.”

“Isolation’s been an interesting transition as I haven’t spent so much time at home in my life.  It was tough at first but now it’s starting to normalize.”

“Well, like everyone we’re taking this one day at a time,” explains Poulin. “It sucks not being able to play live together to promote the album, but at least everyone can still check out the album online. We also have our friend Melanie Kaye helping with PR,  she’s been a very big help indeed.”

“I’m still working my regular job. So things aren’t too different. I normally work alone anyway, so I’m used to the isolating work. I just mask up and wear gloves more.”

There have been a plethora of live streams from musicians. While it is amusing and interesting to watch artists like Vic Ruggiero play regular sets from his bunk. Or to witness Michael Graves jamming from his daughter’s bedroom – it still leaves something to desire. One of the many downsides to this whole situation, is not being able to have multiple people gruped together. As such, the arts are in a state of limbo. Bands will find it hard to write and record, as film sets will have to take a pause and wait it out. Dragged In, though, have found an interesting work-around.

“I don’t feel there’s any deep meaning behind the video in general,” says Poulin when asked about the meaning of the clip. “I feel like we’re just kinda trying to have some fun with it, in a safe way.”

“Blackest moments though is the last track on the album. I really love playing it, I think its quite the banger. It’s fun playing it live. It’s a great set ender I think.:

“As for the video; it’s a reflection of just a typical jam,” says Fenton. ” Just like any other night, Patty puts on his party shorts, storms into the jam space, demands a microphone mid-song, somehow gets it, and then has a tantrum.  As for the meaning of Blackest Moments, it is a song about overcoming challenging times.  It’s about not letting negativity win.  It’s pretty relevant to the current state of affairs.”

With the current worldwide phenomenon of the Tiger King – Patty O’Lantern is onto something. I wonder, though, where is the sleeveless Weird Al Yankovic shirt these days?

“L.P. I is a record about perseverance, resilience, and fortitude influenced by sounds of Black Sabbath, Fugazi, Gorilla Biscuits, and Black Flag.  It has some fast bits, some slow heavy bits, some street punk, and some traditional hardcore, it’s pretty eclectic.  A reflection of some of our musical tastes.  It was made with a particular vision of how we wanted it to sound which was big, and representative of our live sound and energy.  Our other guitarist Cox was crucial in getting everything recorded so the sounds were great to start with, and then Jerry Farley did such an incredible job on the mix.  We are really happy with how it came out.  Hope everyone enjoys it, and when they can afford to, grabs a copy on bandcamp, or streams it, or grabs one at a show when we can do that again.”

Until the inevitable future release of “LP II”, their brand new slab of hardcore can be had through their bandcamp page. We assure you, it is worth checking out.