May the 8th, from henceforth, will be known as Motorhead day. Just as today, May the 4th, is recognized as a celebration of all things Star Wars. These hard rocking’ legends will now be honored in much the same way.

The iconic sound of Motorhead lives on. The loudest band our planet has ever bore witness to. Ian “Lemmy” Kilmister may be gone – but he is not forgotten. Now, through Motorhead Day – he truly will live forever. On the 8th, the rock n’ roll world pays tribute to Lemmy. To Philthy Animal, Fast eddie, Wurzel and Larry Wallis. May they rest in peace. 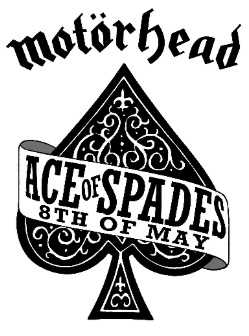 Lemmy was dismissed from Hawkwind in May 1975, after being arrested in Canada for drug possession. This resulted in the creation of Motorhead. At the time, the music world had not known anything quite like this. Motorhead were about to re-invent what rock n’ roll was all about.

Ian “Lemmy” Kilmister was the sole band member to appear on every Motorhead release. Until his, and the bands, demise in December of 2015. Just four days after celebrating his 70th birthday. Phil “Philthy Animal” Taylor, had passed away just one month prior.

“Ace Of Spades” – the title track of Motorhead’s 1980 iconic, game changing album isn’t just one of the greatest hard rock songs ever written. It is more than that. It has truly become a lifestyle anthem for several generations of rockers. Be it metalheads or punks. Bikers, athletes, rebels or outcasts. All manor of freethinkers around the world. Few songs in modern history can instantly ignite the adrenaline of music fans the way the song’s opening dirty bass riff, and drum roll can. From zero to 100 mph in a matter of seconds. That speaker-destroying opening riff is unstoppable. And the song changed the course of hard rock… forever.

Now, 40 years later we are celebrating this milestone album’s anniversary on Motorhead Day 2020. ‘The 8th Of May’ – sing it out loud. Fans from around the globe, join together on this special day where everything is louder than everything else!

Here’s what’ll be happening on the day.

A worldwide premiere of a new lyric video for the most iconic of Motorhead songs – “Ace Of Spades.”

We hope you can join us as part of this celebration of all things Motorhead. Lock down may be going on all around us but the world is ours and we were born to raise hell! We look forward to celebrating 40 years of lawn killing, bastard Rock n Roll with you all!

As the great Lemmy said so often; We are Motorhead – and we play rock n’ roll!