Per Wiberg
All Is Well In The Land Of The Living But For The Rest Of Us… Lights Out
Despotz Records
Released: May 14 ,2021

Per Wiberg, the former keyboardist of Swedish progressive act Opeth, and a member of Spiritual Beggars, has a fresh new release to melt our minds with . 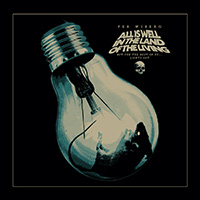 Some artists are able to create works that transcend its audience, through space and time. Inter-dimensions and onto levels that would have the most unscientific minds believing in astral plains. Wiberg fits that mold. His work as keyboardist of Opeth helped create atmospheres previously unknown to the group, and move them into a world of their own. He is integral to Spiritual Beggars as well, but as a solo artist, his genius is only just beginning to unfold. A multi-instrumentalist with vision and the power to create fantastic soundscapes. Wiberg is simply a musical mastermind.

From here on in, I’ll refer to All Is Well In The land Of The Living But For The Rest Of Us… Lights Out as simply All Is Well. For two reasons, because all is indeed well with this release, and because it’s too bloody long to keep typing out over and over again.

Can we take a moment to acknowledge the incredible album name? Not only is the title great, it is also holds all four of the song names within it, too. Maybe I’m just easily amused, but that strikes me as a stroke of genius. So much so, that I felt it needed pointing out. Sometimes, its the small things that make all the difference. A great name, a solid album cover, packaging. Subtly nuisances that seek to push an already great piece of art work over the edge.

Track two, In The Land Of The Living, is a rocking piece with a morose set of lyrics, sung over some deeply intriguing guitar work and moreover, the trademark keys that we’ve come to expect from Wiberg. At times, I’m reminded of what Anathema were doing on their A Fine Day To Exit record. Ambient and atmospheric post-metal meets stoner rock. Both musically and lyrically. Despite the morbidity, it is a strangely uplifting but of gloominess. Strange concept, but there you have it. Per Wiberg sure can weave a clever musical basket. The vocals sung on this track, are akin to those found on the Dead End Kings and City Burials released by Katatonia – and that is good thing.

“All is well, repeat your putrid mantra” sings Wiberg, which stings like a pestilent hornet, seemingly poking at the sayings we’ve all been fed during this pandemic which is now well into its second year. Mentioning rats, seemingly implying this whole Covid thing is more akin to a plague – or at least that’s what I take away from it. As time goes, it would make sense that more and more music and art, in general, reflects on the conditions we, as a global populous, have had to endure during this pandemic. These will be the documents of history some day.

On But For The Rest Of Us… Wiberg creates something you might find on an Ulver soundtrack, written for a David Lynch mindfuck of a film. That is to say keyboard driven, running along the lines of a dark ambient composition. Chanted yet angelic voices, with a transporting shoegaze effect to them. It serves as a slow burn that bleeds into the records final piece, Lights Out.

Like on In The Land Of The Living, Lights Out again echoes ambient post-metal, this time venturing into Opeth territory. Slow, morose and fascinating. There is electric guitar solo here that channels Pink Floyd, with that feeling of power, hope at the end of the tunnel, yet make no mistake, we’re fully fucked ambience to it. The kind of thing Pink Floyd used throughout The Wall. Shadowed by Opeth vibes, which makes sense as much of that was the created of this man, Per Wiberg.

Epic is an overused word and one I strive to avoid, but it works here. This is an incredible piece of art.

Pre-orders can be had through either Per Wiberg’s bandcamp or through that of their label, Despotz Records. Whichever way you choose to go about obtaining this record is fine – just make sure you do. This is something special!

For Fans Of: Opeth, Katatonia, Anathema