Israeli punk rockers, Useless ID, have two new songs, tacked on to a best of album called Most Useless Songs, coming out in May 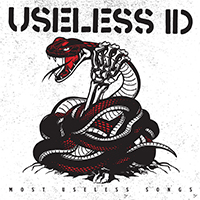 The best way to answer that, is probably to ask the band themselves. “It was hard for us to narrow it down since we think there are a few more songs that could’ve been on the best of, says songwriter, bassist, and vocalist Yotam Ben-Horin. “But we thought, ‘What if we released an album of the songs we play live and in the order we do them? How would that go?” Thus gearing themselves up, one would think, for the eventual return of live music. Hopefully to a stage nearby, and soon.

“I think this compilation shows our growth throughout the years,” Ben-Horin says. “We never stuck to one sound in punk rock, and I think that’s what defines our band as well. We can do a simple pop-punk song like Night Shift and still be able to play something like Isolate Me, and it won’t be weird because it’s the same band with the same sound.” Listening to Most Useless Songs, as a whole, it is evident that Ben-Horin is correct. There is much more diversity in sound here, than I ever realized existed. Throughout their eight full-length albums, it is only when they’re compiled into a single record that the difference between it all is really felt. Understood.

This collection spans the entire twenty-seven year career, to date, of Useless ID’s existence. A lot of their more popular or better known tracks, naturally, are here. Some that might not instantly come to mind, too. Which, if you think about it, is interesting. Ranging from 90s era skate punk on tracks like State Of Fear, or treading those early emo vibes a la Jawbreaker or Samiam on Symptoms, or into pop punk territories on songs like Dying Love . Every different sub-genre Useless ID explored, paid dividends. All of it sparkles with energy and sunshine. Upbeat and fun.

There are also two new tracks exclusive to Most Useless Songs. The soaring, hopeful Same Old Revolution – and Into The Exquisite. I’ve always found it weird to add new songs to a career retrospective, or best of album. How do you compile your best work, then throw in new music, and keep the integrity of the product you’re trying to show off. Are you saying your new stuff is an instant hit? Just as good as the songs your foundation was built on? This is seldom the case for any band or artist. Maybe I need to cut back on my coffee intake and just relax a little. Useless ID are certainly not the first – nor the last band to do this. I suppose it is a way to stand up and shout, Hey! We’re still here. To announce that new music is in the works.

On Same Old Revolution, Useless ID wax poetic and get rowdy spiting venom about modern times. It is a solid pop punk ditty, with massive hooks and a catchy chorus, drawing attention to the remnants of our times. A toe-tapping, head bopping, shoulder swinging good feels only despite the world crumbling around us sort of vibe. Ending off with Into The Exquisite, which is a little more edgy than Same Old Revolution, and harkens back more to earlier days – the skate punk stage of Useless ID’s identity.  Almost as if to prove that the band can still pull off both sides of things, and that they still love to play it all. “When we recorded the new songs for the best of, we were reminded how much fun we have making music together,” Ben-Horin says. And isn’t that what’s important at the end of the day?

All in all, Most Useless Songs is a fun and engrossing look back over nearly three decades of punk rock. Whether you’re a fan of Useless ID or a casual listener with a passion for skate, early emo or pop punk, Most Useless Songs is a seminal look into one of the most successful Middle Eastern punk bands – a region not really known for this sort of thing. That’s pretty cool. Although an official word on whether anything new is in the pipelines from Useless ID – the cryptic hints seem to point to this being a warm up for what’s inevitably to come. We already have the setlist to their next tour, here. These cats are sneaky!

Copies of Most Useless Songs can be obtained on vinyl – including a limited 300 print run on undisclosed color vinyl, compact disc, or digital, from the Fat Wreck Chords webstore. Don’t hesitate, especially if you’re after the colored vinyl. Anything like that on Fat Wreck Chords sells out almost instantly. They once released an LP of Fat Mike’s dogs farting, on brown vinyl, and it sold out in minutes. I totally made that dog thing up, but it serves to make my point.

For Fans Of: No Use For A Name, Lagwagon, Jawbreaker