Portland’s Robots Of The Ancient World return with their third album, Mystic Goddess, and the stoner rock realm needs to take heed. 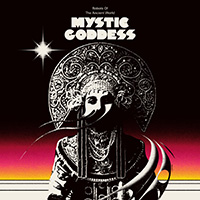 Heavy on everything from fuzz, to big riffs, big on psychedelic rock and the marihuana stench can be smelt emulating through my speakers – Mystic Goddess is a fun ride through a smokey haze.

One of the elements of Robots Of The Ancient World that stands out, like a sore thumb, is just how much the vocals of Caleb Weidenbach draw from the likes of Glenn Danzig and Jim Morrison. At times, it’s uncanny. Not as blatant as The Tea Party, mind you, but there are moments where the vocal patterns and the way he bends his notes, pronunciates certain words, screams Morrison. See Wasteland for example. If anybody remembers Dommin, the vocals are quite similar.

On Unholy Trinity, the fuzz is massive. Mainly due to the really slow riffing of Nico Schmutz and Justin Laubscher, which comes across as so sludgy and full of doom, that I can’t contain my head, as it wobbles about like one of those bobblehead bad boys. Such solid riffs. So much low end here, that I constantly find myself reaching for the volume dial, tweaking it ever upwards. More! More!

See Also: Per Wiberg “All Is Well In The Land Of The Living…” Review

Then, MK Ultra Violence appears to nod towards the Mortal Kombat video games, and with the movie just released this week, the timing is perfect. It could also be an ode to Stanley Kubrick’s A Clockwork Orange too with a name like that. Unfortunately, I don’t have the lyrics to dissect. I could be totally barking up the wrong tree. This is followed up by a song named Lucifyre, that drones along with a stretched out, slow and solemn dirge that really feels like being caught in quicksand. Slowly drowning in its majesty. Sometimes, Robots Of The Ancient World sound like what might happen if you played a The Doors record at the wrong speed, but kept the vocals as they were supposed to have been. Oh and Morrison would have to have had a bad day and be singing with grit between his clenched teeth, too.

Speaking of Lucifyre, there is a fantastic spoken word sample that plays during the track, that sends a strong message. One ripe with truth. About modern society and what the human species has become – and why. The speech is lifted from an interview with conspiracy theorist David Icke, and is played over some dauntingly dark jams. Feedback and bizarre noises. Icke had his social media accounts deleted last year, for publishing “health misinformation that could cause physical harm“. Author of more than twenty books, Icke has been a controversial figure since retiring from sports and sports broadcasting.

“I’m intrigued by psychedelics, esotericism, and conspiracy theories. I love to go deep with secret societies, other dimensions, and all that jazz. So, when you hear the Carl Sagan intro to Cosmic Riders or David Icke closing out Mystic Goddess, it’s a tribute,” notes Laubscher, “a nod to those dudes who are a creative inspiration for my song writing.”

Pre-orders for Mystic Goddess are available right now from Small Stone Recordings. Don’t delay, supplies are running out. Also, the earlier works from Robots Of The Ancient World, 2019’s Cosmic Riders, and 2017’s bluntly named Four Song EP, can be obtained from the bands bandcamp page.

For Fans Of: Kyruss, Boris, Lowrider