Progressive is probably the only proper way to describe what Rivers Of Nihil are. Ahead of the curve, maybe. Avantgarde, possibly. 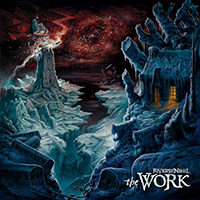 Terms can be thrown about, willy-nilly, but perhaps it is time to stop calling Rivers Of Nihil a death metal band – they’ve transcended that tag, and left Earth for other planets within orbit. Although there are still trace amounts of the genre still lingering about, what Rivers Of Nihil have crafted here, is far beyond. Beyond comparison, beyond understanding.

At times, it feels as it Rivers Of Nihil have channeled metalcore segments, which I find strange and foreign. Not unlike labelmates The Ocean Collective, and what they did on Phanerozoic II: Mesozoic | Cenozoic  actually. If I’m honest, I could draw comparisons between these two recordings on several occasions – which is a good thing. This is for the forward thinking music aficionado. There is so much going on here, moments of heavyness, brutality and within the same song, smooth jazz components. All over the place. As cerebral as it is visceral. Complex, deeply routed and supremely beautiful, yet I fear it may easily be dismissed for all the things that make it great. Hopefully not.

Finding the words to fully explain what is happening here, is quite possibly impossible. If Pink Floyd followed up The Wall with a death metal inspired record, perhaps it would have been this. This is as if a collective of musicians, with nothing in common, got together and each added their own bits into what the other members were planning, without trying to sound similar. How many times have artists claimed that there is a little bit of everything in a recording – falsely, I might add. That is, until now. Listening to Rivers Of Nihil has become like listening to an android making music mash-ups that serve no logically purpose, until it does.

On Clean, the soundscape gains an eerie synthesizer piece, some saxophone – and I’ll say it again, it is astonishing how well saxophone works in metal, and a fantastic piece that I can imagine the likes of Dan Swano loving. I don’t know why, just a gut feeling. Potentially because at several intervals, Swano’s Moontower album came to mind. Rivers Of Nihil also used saxophone on their last record, Where Owls Know My Name, to great effect, and I imagine the feedback from that lead them to continue on with it. Why shouldn’t metal acts have a wind section anyway – like a full on orchestral wind section. Saxophones, trombones, some trumpet… why the shit not!

My main gripe with this release would be that I felt the band was really treading into interesting territory with 2018’s Where Owls Know My Name, and much of that progression appears to have been ditched by the wayside to make way for these neo-elements, and that feels to me like wasted potential. The flipside to that coin, is obviously that Rivers Of Nihil have found a fruitful path upon which to wander with The Work, which eases that feeling down to mere nothingness. I suppose the innovative pioneers deserve more credence than to hold such a grudge would permit. After all, what Rivers Of Nihil have been able to craft here, is astonishing.

“We didn’t really know if it was all going to connect together in any kind of logical or interesting way. It wasn’t until we got the vocals done that it was clear what we had on our hands – something that actually somehow all worked together,” says guitarist Brody Uttley, who describes the album as a “Sound World,” a term coined by a friend. “It’s an album that almost sounds like a place rather than a thing. It puts you in this world where you’re not exactly sure what is going on at certain points, but eventually, it all comes together. It’s harsh and cold, but also warm and inviting,” he adds.

“I don’t think on any other release I was able to insulate myself from external noise like I did on this one. The amount of work that went into it is obscene, but I felt like I was just floating through this ‘sound world’ the whole time, kind of grabbing ideas off of the vine and seeing how they worked.”

Courtesy of their friend Zach Strouse, saxophone once again adds extra layers of atmosphere to the collection, utilizing baritone, soprano and alto saxes to great affect. “We really wanted the sax to be more of a texture on this album rather than a featured instrument. So while it may seem like there is more sax, the only ‘true’ sax solo is in ‘The Void From Which No Sound Escapes.’ For most cases on the rest of the album, he is just sort of reinforcing the songs in his own way, which is exactly what I wanted. I didn’t want to tell him how to sound or what to do really. I just wanted his response to the material, and he definitely did a fantastic job.”

Grab your copy of this incredible record from Metal Blade now – or live to regret it!

For Fans Of: Meshuggah, Gojira, Tool