Traditional heavy metal revivalists Sprit Adrift are back, with their debut for Century Media – an EP named Forge Your Future. Picking up right where they left off. 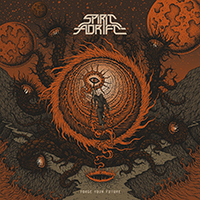 Last year, Spirit Adrift dropped one of the best metal records of the year, with the release of the phenomenal Enlightened In Eternity – which earned them a boatload of attention. It had enough of an impact to earn them a contract with Century Media, where the band will now be exposed to even more ‘bangers. Spirit Adrift have truly forged their own future of late. Less than a year later, and we already have a follow-up release to devour – and I couldn’t be happier.

I’m not sure if these are the leftover cuts from the Enlightened In Eternity sessions, or freshly composed tunes – but either way, it doesn’t really matter. These three tracks continue from where the boys left off – and as I already alluded too, they left off at the very top of the pile. Obviously, with that sentiment released, these new pieces are stylistically quite akin to those found on Enlightened In Eternity. Fantastically composed pieces of Traditional heavy metal majesty. Big riffs, bigger hooks, and giant choruses. It goes without saying, that if their previous works weren’t your cup of tea, then this won’t be either. Also, seek out a psychiatrist immediately!

See Also: The Blood Of Christ “The Lonely Flowers Of Autumn” Review

Despite being just three songs long, Forge Your Future still gives out twenty minutes of premium material. Although we don’t get any monster songs like Ride Into The Light here, it is important to remember that this is more of a showcase that their new label, Century Media, is putting out. For anybody that may have missed their final released on 20 Buck Spin. Three songs to get their name out, while they prepare a proper sequel to Enlightened In Eternity.

starting off with Forge Your Future, the title-track and and an overall romp of a song. Of the three this one sounds closest to those found on Enlightened In Eternity. Big riffing, and about as catchy and contagious as the common cold. It flows beautifully and leads into each segment with ease and purpose. The chorus borders on ballad, and shines with a maturity of song writing like that which gapped Spirit Adrift’s first two albums, and last year’s breakthrough release. Slower in pace than much of what fans might be accustomed too, but that isn’t an issue here – Forge Your Future feels silky smooth and ripe with groove.

The second track, Wake Up, bursts right into a throwback riff and floor-tom countdown beat. Solo, right off the bat, and away it goes. Every element found on Wake Up screams nineteen-eighties in the best possible way. The only thing missing is the spandex and teased hair – and lets face it, we haven’t seen these lads on a stage in nearly two years now; they’ve had time to make the wardrobe changes.

At seven and a half minutes in length, the third and final cut, Invisible Enemy is the longest on the record. It starts off with a monster of a riff; a solo shred. It too feels like a throwback, with modern discrepancies, and fits right in with what the band have churned out on this and the previous vinyl slab. This one, however, feels a little long for my tastes. The final moments of the track, introduce some well-placed keys and it all comes to a halt using those keys.

Pre-orders for Forge Your Future are currently available from Century Media, and feature the tree tracks on the A-side of a 12″ LP, with an etching on the B-Side. Limited to just a thousand copies, and comes with a digital download code.